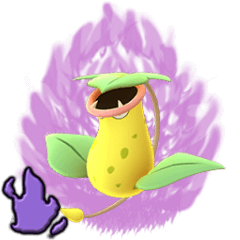 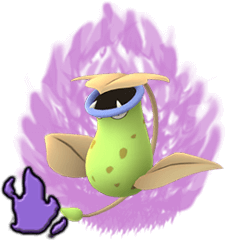 Shadow Victreebel is an outstanding attacker with both of types, sporting very, very good offensive presence on both sides of the spectrum. That said, its Grass Type role is more potent and useful generally speaking.

Shadow Victreebel puts most of its work in just with Razor Leaf. It hits hard, but generates energy incredibly slowly. Leaf Blade, then, pairs with it fantastically, due to its low energy cost. Your second move barely matters, as it's very difficult to reach. Sludge Bomb is a strong Poison-type move that can deal a ton of damage if unshielded. Acid Spray, on the other hand, makes the bet that your opponent is going to shield no matter what (as even a resisted move from Shadow Vic hits hard), and reduces their defense significantly. This either allows Victreebel to Razor Leaf even harder, or at least sets up a better farm for your next Pokémon.

If you've ever encountered a Shadow Victreebel in Go Battle League, then you know that its entire job is to cut everything in the world down using nothing but leaves. it won't last long, but it has the strongest viable fast move spam in the game.

While the Shadow Boost works well in Great League, Ultra League is where that loss of defense genuinely hurts. It can pull the same role as its non-shadow forme, but its performance does tend to suffer given the bulk that the Ultra League tends to demand.

Victreebel’s low CP cap prevents it from being competitive in Master League.