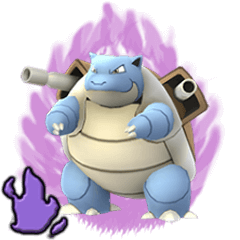 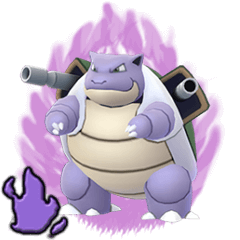 The introduction of its Shadow form finally put Blastoise on the map. However, not everything on a map is worth visiting! Shadow Blastoise has a general performance fairly close to normal Swampert, so it's really nothing special for the most part.

Water Gun performs better than Bite and also gets STAB.

Ice Beam should be the second charge move for Shadow Blastoise as it provides meaningful coverage. Flash Cannon can hit hard, but with a 65 energy cost it's quite slow and doesn't really complement Shadow Blastoise anyways.

There are shameless brags for Pokémon how about you post pics of your favorite pokestop? Post the Funniest or coolest below
Post the best pokestops you can find!! Whether they are hilarious absurd or just…
Returning player lost in pvp
Hello there ! I’ve just gotten back into pogo, and i’m lost with pvp IV and pokemon…
Shinx Community Day
Looks almost certain according to Leekduck, the move will doubtless be a PvP one…
Yamask / Cofagrius ... will it live up to the hype?
I wanted to ask the PVP gurus out there if they think Yamask / Cofagrius will live up…
1500 and below or above Empoleon
So I have enough candy to evolve my 3 star 439 Piplup… should I evolve it and have a…
Read More