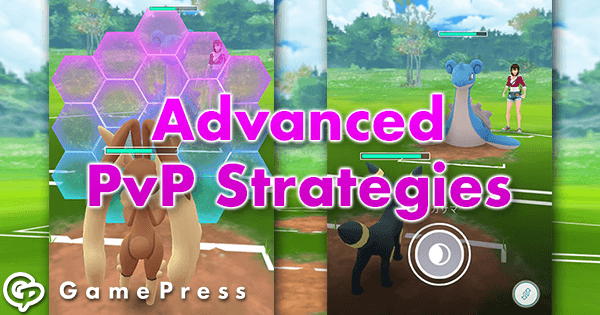 If you’re more of a beginner in trainer battles, I recommend reading my previous article here to get a sense of what you need to get started.

While there will definitely be some useful concepts here, don’t get intimidated, and don’t necessarily try to work everything mentioned into your gameplan immediately. Just keep them in mind as you progress as a player!

If your opponent isn’t counting your fast moves, it can be worth building slightly more energy than you need before each charged move. If your opponent thinks that you’re back down to 0 (or “close enough to 0”) energy, you can trick them into thinking they have more time than they actually do before your next charged move.

In certain cases, it can be worth building up enough energy to fire off multiple charged moves in a row. This isn’t just relevant when farming energy.

Imagine this scenario: your opponent has one shield, and you have enough energy to fire off two Surfs, and one Surf would be enough to KO their Pokémon.

In this context, your opponent will not be able to get any more use out of their current Pokémon. It’s as good as fainted already. Therefore, the “correct” choice is for them to not shield your first Surf, let their Pokémon faint, and switch in the next Pokémon with a shield left. If, however, they don’t recognize that you have as much energy as you do, they may use the shield, thereby giving you a major advantage for the rest of the game.

PvP is a game of resource management. Shields, energy, remaining Pokémon, and even your Pokémon’s health. And as long as you have any Pokémon left when their last one goes down, you still win. While you can play safe, it’s important to know exactly how far you can stretch your resources.

Imagine this scenario. You’re playing Great League with a Powder Snow/Avalanche Froslass. Your opponent has an Altaria with low health, and some amount of energy built up. Neither of you have shields.

You’ve got a couple of choices:

There are costs and benefits to each of these. 1 is safest for your Froslass, but 2 and 3 potentially give you more advantage for the next Pokémon that they switch in.

The ultimate goal is to build as much energy as possible at the lowest cost to yourself, and that means (hopefully) knocking them out before they can fire off a charged attack, which would cost you either a shield or even a Pokémon. This is where counting fast moves can come in very handy. Instead of just going by feel and risking eating a charged move, you can know exactly how far you can push it.

Farming up energy can be absolutely key to victory. Do it whenever you can!

Switching, as tough as it can be, is an important part of trainer battles. Here are a few switch tactics you can look into to improve your game.

Sometimes, you really don’t want your opponent farming energy. If they’re on their last Pokémon, and you have two left. No shields available. In this case, let’s say your final Pokémon is a Toxicroak (Counter + Sludge Bomb and Mud Bomb), theirs is Umbreon (Snarl + Last Resort and Foul Play). Your current Pokémon is a Xatu, low on health.

Like in the previous scenario, you’ve got a few choices.

If your opponent is likely to have to use a Foul Play to finish off your Xatu, then 1 may be correct. However, if a full health Umbreon has at least 30 energy when starting off the battle, it manages to actually beat Toxicroak in a shields-down scenario.

While this is unsafe if your opponent has more than one Pokémon remaining, aggressive switching can be a necessary tactic to win games.

As you’ve probably recognized, switching can be very risky. In some limited metagames (many of the Silph cups, for example), you’re almost guaranteed to lose whatever you switch into off a counterswitch. If your lead is important to your gameplan (but is bad against your opponent’s lead), it can sometimes be worth switching it out to keep it alive for later. You’re effectively sacrificing a Pokémon to gain a free switch after your sacrifice goes down.

As a bit of a foil to sacrificial switching, there’s Safe Switching. Basically, a "safe switch" is a Pokémon you can easily switch into when you're currently in a bad matchup that your opponent can’t easily counterswitch into. In the Silph Regionals format, an example of this was Sableye. While it didn’t necessarily have dominant matchups, if your opponent led Medicham into your Bastiodon, you could pretty safely go out into Sableye. Not much outright countered Sableye, so now they can at best get a more even matchup.

Sometimes you've gotta let Pokémon faint. Remember, switching in this game is very risky in most cases, because it means whatever you switch into is unlikely to win against whatever your opponent counter-switches into. If you think the rest of your lineup is necessary against what your opponent has brought, then just let your current Pokémon faint. Don’t throw too many shields away, just try to get some damage off before you go.

"They're switching something in! What do I do?"

The moment your opponent switches is very key in any battle, and it leaves you with a couple of options. When they switch, you are immediately in a position of power due to the long cooldown on the switch ability and your ability to make a powerful counterswitch.

The safest thing to do is wait for their Pokémon to switch in, get to actually look at it, and then respond by switching or firing off a charged move. But if you have the guts, and the reads, there are some riskier plays you can make.

Just do it. Switch. If you think you know what they’re going to switch in, and you’ve got a strong response (or their Pokémon absolutely destroys yours, such as Toxicroak vs Confusion or Quagsire vs Razor Leaf), you can blindly switch. This is super risky, because if you guess wrong then you’ve both lost your switch, and are in a disadvantageous matchup. But hey, anything for glory, right?

Somewhat safer is, if you have a charged move ready and you see them switch, or they’re bringing something in after a KO, you can just queue up a charged move to activate before they get the chance to act. Again, still somewhat risky, because maybe you’re choosing the wrong move, and waiting a second longer could have given you that advantage. But at the same time, it could also win you the game. If the Pokémon your opponent is switching in has a charged move of their own ready, you need to make that play to save your shield or your Pokémon.

Recently, a new piece of tech has been found that allows you to “steal” Charged Move Priority from your opponent. If you fire off a fast move at the same time they use a charged move (keeping in mind they were going to be using the charged move first anyway), you now have some energy advantage. This allows you to fire off your next charged move before they can. Keep in mind that a wily opponent may try to steal it back!

In a recent patch, Niantic removed the ability to steal charged move priority. As such, you're now stuck with however the game sets it up initially.

Just know that if you don’t have CMP, you’re at a disadvantage. In a mirror match, if it would come down to shields, you’re going to lose (e.g. Mud Bomb Toxicroak vs Mud Bomb Toxicroak). If the matchup just comes down to fast moves instead, you can tie if you go even on shields.

If you can’t win the matchup, carefully consider how you’re investing your resources for that battle. Maybe you want to make them work for it, and deal as much damage as possible before you go. Maybe the rest of your team will do just fine, and you can sacrifice your current Pokémon. There’s really no single strategy for this, so you’ll need to figure it out as you play.

How do I know which Pokémon they brought?

While you can’t 100% know anything past what you’ve seen, you can tell by their behaviors. Do they counter-switch after you switch? Are they saving their shields, or sacrificing their Pokémon? What did they lead with?

From seeing your opponent’s 6, and then reading how they play, you can attempt to guess what Pokémon they have in the back.

If, for example, you lead with an Azumarill shown to be Hydro Pump/Play Rough, and they switch into Melmetal, you can be pretty sure they didn’t bring Venusaur, as that would be a much safer switch.

Remember what Pokémon are in the battle

It’s surprisingly easy to go into a match and forget what 3 Pokémon you brought. In the heat of battle, where a single switch can totally change the way that a game plays out, you’ve gotta remember which Pokémon you have available. Similarly, you have to remember what Pokémon your opponent brought and have switched out, or how much energy your opponent’s Pokémon may have.

It can be all too easy to zone out and just tap away at your screen, even in a tournament setting. Make sure that doesn't happen. If you're not trying your hardest, and your opponent is, you're giving the game away. Don't get greedy. Don't get cocky, and don't freak out. As written in Frank Herbert's Dune, "Fear is the mind-killer." If you start panicking, you'll have trouble fully paying attention to the game.

Respect your own skill, as well as your opponent's. At this level, you're both prepared to win, so taking it too easy on them or going too hard on yourself can only make the game go worse.