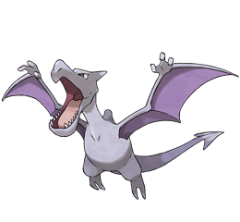 Although not quite as simple as Scyther, Aerodactyl is definitely easier than Machamp, despite having approximately equal bulk. Its weaknesses are far more exploitable, and it’s readily countered by both legendary and common Pokemon alike. Most of its moves lack power without a 20% STAB bonus, so a decently crafted team shouldn’t worry about wiping out.

Reminder: Good movesets are not necessarily viable at the level indicated.