The implementation of Mega Evolutions to Pokémon has been controversial, but whether you love em or hate em, there’s no denying their benefits can be impactful. In this guide we go over which of our currently available Mega Pokémon provide the most benefits during this year’s Go Fest.

The first day largely focuses on catching Pokémon, whether they are wild spawns, Incense/Lure spawns, or Research Encounters. As we all know by now, Mega Pokémon provide one additional candy for catching any Pokémon that shares at least one of the same typings as the Mega Pokémon (if dual typing). Therefore if you intend to play for several hours straight and catch hundreds if not thousands of Pokémon depending on where you live, the candy bonus from Mega Pokémon can add up considerably. So which Mega Pokémon are best for Day 1? 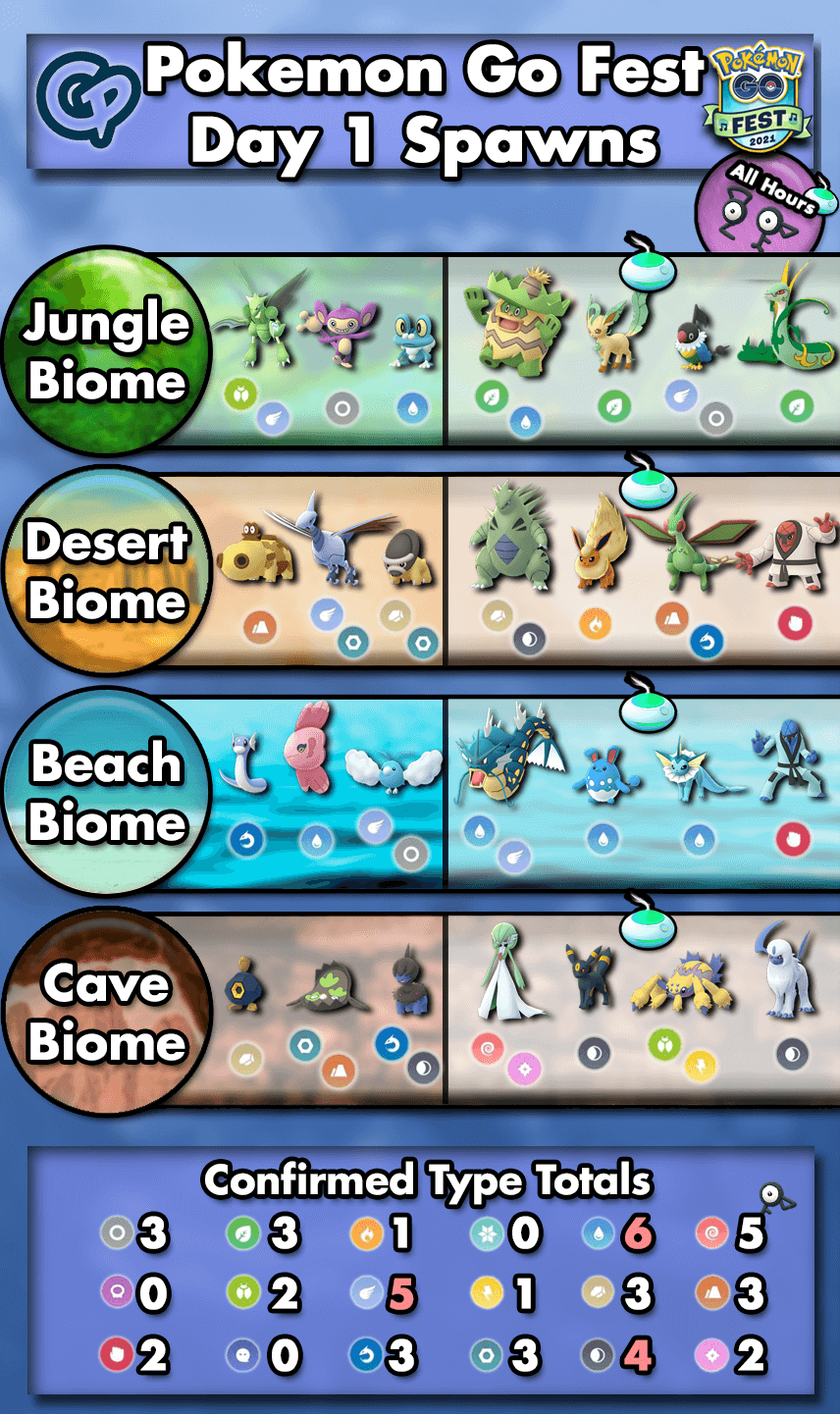 Based on info we’re been provided from the official Pokémon Go website, the most common typings (including Incense spawns) are Water, Flying, and Dark. Of the currently released Mega Pokémon we can choose from, Mega Gyarados provides the most coverage as a dual-type Water/Dark Pokémon.

The choice to boost Flying-type candies is ultimately up to the individual trainer if they believe it’s #worthit. The featured Flying-types with the exception of Chatot (who’s only useful as a regional dex filler) are either quite strong in the metagame or have their own niche. Though at this point most players who play consistently should already have access to them.

Scyther can be evolved to Scizor as a decent Bug-type raid attacker and niche Pokémon for Ultra League. Skarmory is very valuable in Great League but only for that purpose, likewise Swablu evolved into Altaria is awesome for Great League but it was featured in a Community Day two months ago.

Other valuable Pokémon in the PvE scene include Gardevoir, Absol (for its future Mega), Tyranitar, Dratini (when evolved to Dragonite), and Gyarados. Deino is also a popular target for its rarity and shiny opportunity, but its final evolution stage Hydreigon has been a disappointment in the metagame. Froakie will most likely have its own Community Day in the future, so lowering it as a priority might be appropriate for this event.

For the PvP metagame, Galarian Stunfisk, Shieldon (when evolved to Bastiodon), Azumarill, Umbreon, and Galvantula are all valuable Pokémon. Other Pokémon like Ludicolo, Serperior, Flygon, etc. can have their own niches in specific formats, so it’s up to the individual trainer how much of a priority they are, and whether Mega Evolving specifically for them is #worthit.

If you're looking to grab the most candy of otherwise rare Pokemon, you could also consider Mega Lopunny. Its Normal-Fighting typing will give you extra candy for each of the event's three regional Pokemon (Sawk, Throh, and Chatot), as well as Audino, making it another excellent choice.

Because of how each hour rotates the themes of which Pokémon can spawn, Mega Evolving multiple Pokémon to maximize candy returns can be quite costly, but it’s up to the individual player if they deem it to be #worthit. Currently, as of writing this article, there are no released Mega Pokémon in the game that share the same typings with Galarian Stunfisk, Shieldon, Roggenrola, or Hippopotas. The music-themed Pokemon that include Chimecho, Audino, Kricketot, Whismur, and Pikachu aren't particularly valuable either, so they were not emphasized in this article.

tl;dr Mega Gyarados maximizes candy for Day 1. Otherwise, Mega Evolve whatever is most important to you.

The second day places a major emphasis on Raids. Just to recap, Mega Pokémon provide a 30% bonus to attacks (either Fast or Charged) when they’re the same typing as the Mega Pokémon, and a 10% bonus if the typing is different. (These boosts do not stack with multiple Mega Pokémon). All Pokémon obtained from Raids are guaranteed an additional candy regardless of typing, so there's no need to have an active Mega Pokémon that specifically shares a typing with Raid Bosses.

With literally all Legendary Pokémon thrown into the pool of available Raid Bosses, the overall choice of which Mega Pokémon is best can be rather complicated. Overall, the most valuable coverage attack types are Ice and Rock, Super Effective against 13 Raid Bosses, though we currently do not have an available Rock-type Mega Pokémon. Therefore, Mega Abomasnow provides the most overall coverage if that’s what you’re looking for.

When considering individual priorities, the answer becomes more convoluted. Raid Bosses with less bulk such as Mewtwo or Zapdos might not require the additional combat bonuses from Mega Pokémon in order to defeat them, while Pokémon who have double weaknesses such as Moltres, Rayquaza, or Landorus take this point a step further.

Pokémon who have been historically challenging to players include Pokémon with more overall stats like Kyogre or Regigigas, or Pokémon with high DEF stats that make them very bulky and time consuming, such as Lugia, Uxie, or the Regis.

Of the currently released Mega Pokémon, Mega Gengar boasts the highest individual performance against Psychic-type Pokémon, but is rather fragile and its Poison sub-typing is a liability against Psychic types, limiting the time of its attack boosts for the attacks of other trainers' Pokémon. Therefore Mega Houndoom might be a strong alternative Mega Pokémon, if bulky Psychic-types are your primary concern.

With regards to the Regis, Mega Lopunny is the only Fighting-type Mega Pokémon currently available who hits all of them for Super Effective damage. Its Fighting-type coverage is also quite wide, useful for popular Raid Bosses like Dialga. Alternative Megas like Mega Charizard Y (for Regice and Registeel) can also suffice, but have less coverage against other priority Raid Bosses.

Mega Venusaur or Mega Abomasnow provide strong Grass-type support simultaneously against the popular Groudon and Kyogre simultaneously, if those two are your priority, but lack coverage against most other priority Raid Bosses (unless you are willing to use TMs on Mega Abomasnow as needed). Alternatively Mega Ampharos or Mega Manectric can be strong against Kyogre specifically, in addition to Flying-type Raid Bosses like Yveltal or Moltres.

Most other Raid Bosses not already mentioned aren’t usually as challenging, and don’t require as much commitment to defeat; if none of the previously mentioned Raid Bosses interest you, then pick whatever Mega Pokémon you believe is best for your goals. It’s just unfortunate that we don’t have more options to choose from at this point of the game; there’s plenty of hype building up for anticipated future Megas, including Mega Mewtwo X featured in this year’s Go Fest promo picture.

tl;dr Mega Abomasnow, otherwise whatever your priority is.

With assistance from MyDandyLion and Raven8.

Writer for GamePress with a focus on raid and PvP content. Retired from competitive play, former GBL Rank 10/Legend and Silph Arena Elite. Also a fan of Digimon.