The Best Ways to Beat Down Blissey

Submit Feedback or Error
Table of Contents
Article by dondon151.

With the release of gen 2 emerged Blissey, the unrivaled best defender in Pokemon GO. As mentioned in her tier list summary, Blissey is far superior to the next best defender, Snorlax, who itself is a cut above the rest of the crowd. What makes Blissey truly fearsome is her massive HP complemented by high defense stat, which prolongs battles to the point where timing out is a real possibility for unprepared attackers. The length of these battles also allows her to output considerable damage despite a rather bad attack stat.

Players have developed their own personal preferences for how to fight opponent Blissey. Some of these preferences are rooted in sound evidence, while others are suspect. The goal of this article is to provide numerical bases for recommendations when attacking an opponent Blissey.

Celandro’s Pokebattler website recently implemented a “Pokedex” feature, which ranks a particular Pokemon’s offensive and defensive matchups by several possible metrics. This substantially simplifies the process of writing this article. The metrics that players typically care about are power, time, and potions, defined below.

Time: This is how much time, in seconds, an attacker requires to defeat the defender.

Potions: This is how much damage an attacker sustains in the process of defeating the defender, expressed in terms of purple 20-HP Potions.

Pokebattler offers several basic attacking strategies that attackers can use in their simulated matchups. They are no dodging, dodge specials, and dodge all. These are self-explanatory.

First of all, if you want to have any success against Blissey, you must dodge at least her specials. No Pokemon can beat Blissey without dodging anything.

The more important question is: should the attacker dodge only Blissey’s specials or dodge everything? The answer to this is less clear. In general, dodging everything increases power while decreasing time and potions. But given the length of Blissey battles, attempting to dodge everything can be taxing, and some attackers are in danger of timing out if they try to dodge everything.

What are the best attackers? 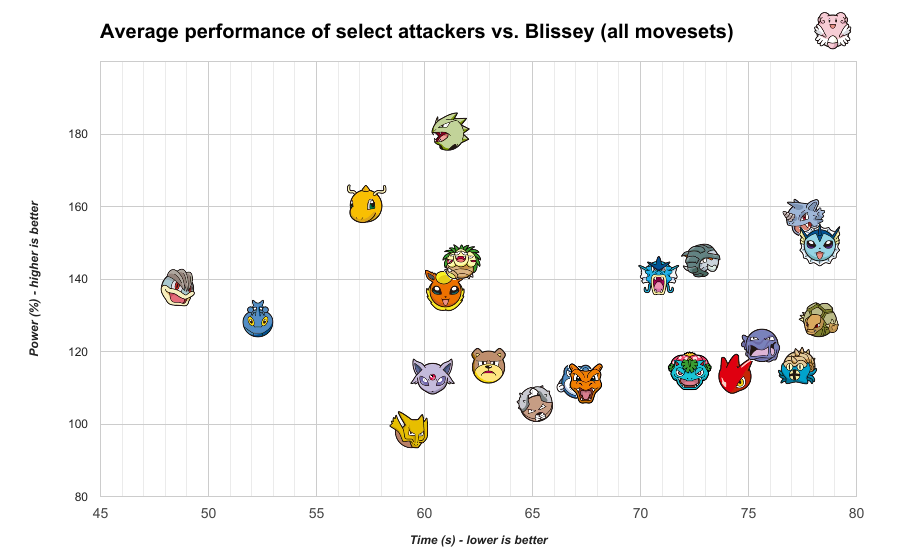 From the plot, there is a clear top tier of Blissey attackers consisting of Tyranitar, Dragonite, and Machamp. Machamp is the fastest while Tyranitar is the bulkiest, with Dragonite being in-between in both respects. Heracross is strictly inferior to Machamp but still quite good.

In the center of the plot are Flareon and Exeggutor, who represent a clear second tier of Blissey attackers. Roughly speaking, they have Tyranitar’s speed but Machamp’s bulk. It’s worth mentioning that Flareon is good vs. Dazzling Gleam variants and Exeggutor is good vs. Psychic variants.

The remaining Pokemon on the plot generally fare well by either the power or time metric, but not both. Which one the player should use depends on his personal priorities - does he simply want to beat Blissey as quickly as possible, or does he value longevity when fighting a full level 10 gym?

What if I don’t have the best movesets?

Many players have experienced the frustration of repeatedly playing the RNG lottery and coming up short. The plotted points represent Pokemon with their optimal movesets, but many Pokemon only have 1 or 2 optimal attacking movesets out of a possible 6 (or more if there are legacy moves).