The Case for More Servings of Legendary Lunch Hour 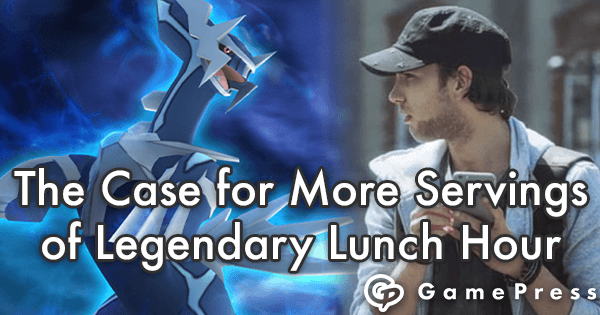 Last week Niantic announced they would be testing an “event” on 3/13 where Legendary Pokemon would spawn during the time many people take their lunch break. Eggs would appear at 11:50, hatch at noon, and stay live until 1 pm local time. A vast majority of gyms would have raids. For this wave, Dialga was the Legendary that appeared. I was extremely excited about this, as I generally take a break from work to raid at lunch anyway. However, surprisingly this event was met with snark, criticism, and even anger from trainers… even more than you see in response to every other Niantic announcement.

This event was made for my demographic. My raid group and I generally work corporate jobs with a mildly flexible lunch break. It’s much easier for us to sneak out to an EX raid during the work day than it is to get 3 hours away from spouse or kids on a Saturday. We don’t mind spending a little money for convenience, as our time is worth more than maximizing free passes or gym coins. We prefer to hit a few raids during lunch hours, but commonly we are only able to find one Legendary raid at most. So many lunches have been wasted scouting instead of playing!!!

Legendary Lunch was extremely convenient. Instead of sneaking looks at phones during our 11 am meetings to figure out where to raid, we knew when and where to meet. Since most of us are pretty good on Dialga, we chose to walk a park with 6 gyms. We could have easily done ~12 had it been a more important boss, but we were happy to keep it nice and casual. On an average day we get about 8 raiders, with as many as 25 coming out in the first day or two after a new boss is released. On the 13th we had 60! Sixty people in a small suburban community at lunch on a weekday. Some did their free raid or two and left, but most did all 5 raids (one gym was blocked by a Breloom… since it was an EX spot many did that as well!). We were done in about 30 minutes, leaving plenty of time to eat, chase more raids, or hit Dialga in the park that were originally missed by those running late. Locally it was met with universal praise, and we genuinely had a good time. Being able to get so much candy in a short time was wonderful.

In an era of Pokemon Go that is plagued by short window events which inflame fear of missing out (FOMO), Legendary Lunch was a wonderful change. Those that didn’t participate missed nothing. Dialga is still around with plenty of time remaining to get one. Those could attend were rewarded with fun and convenience, but gained no in game advantage like a limited release Pokemon or an exclusive move.

There were still some level 1 through 4 raids, so it wasn’t a total blackout. And there are still 167 other hours left each week to take gyms.

With so many people having a limited lunch hour, the event really makes sense just for convenience alone. Instead of searching, we are raiding more. This was only the first test, so we’ll likely see it tried at other times of day. I’d love to see different windows like Rush Hour Raikou, Dinner with Dialga, Late Night Lugia, Morning Mewtwo, or Green Eggs & Groudon.

Obviously we all want more free stuff, but if Niantic gave passes for this it would have been a disaster. Imagine all the complaints from people who couldn’t raid during the window. In addition, Niantic is a business. They’re allowed to make money. As mentioned above, the demographic that raids at noon is one that spends. It’s very possible that giving free passes didn’t help the sell more coins, but perhaps Legendary Lunch will.

“Why is Niantic doing this instead of fixing X”

I think a very large portion of the player base would love to see a full update to squash some long standing bugs and add some missing quality of life functions. But more likely than not, the employees involved in planning and executing Legendary Lunch are not necessarily the same ones who are fixing bugs.

“This event only helps spoofers”

This was one of my favorites. You think spoofers have trouble finding raids on normal days and need an event like this to get them?

This was a common complaint from urban players. At this point we are almost two years since the dawn of raids. While in game communication would be nice, there is no sign it is coming. However, there are a myriad of other options. The Silph Road Community Map is great way to find existing raid groups to join. Almost every large city has at least one group, and many suburbs do as well If you don’t have one locally, create your own! It isn’t hard.

And on the other side we have the rural dilema. Two thoughts here:

EX raids still spawned, and Deoxy’s takes minutes to defeat. There was still plenty of time left to enjoy the event. That said, Niantic should probably try to keep these on separate days

At the end of the day, Legendary Lunch was a wonderful event for those who could participate. Working players who might have trouble hitting other events were able to get a few days worth of grinding done in one shot. Communities were raiding together. For those that couldn’t or didn’t want to, there was no tangible loss in game. For once there was no FOMO. Let’s see more events like this Niantic!