LET'S DO THE TIME WARP AGAINNNNNNN

GoFest seems like it was only yesterday.  Maybe that’s because my body and sleep schedule are only now somewhat recovered from that amazing but hectic weekend.  Niantic, however, has determined that there is no rest for the weary, with Ultra Unlock Part 1: Time.  If the debutante shinies of Shieldon, Cranidos, and Dialga aren’t enough to keep you rocking around the clock over the next, let’s see if the event PvP offerings are.

Overall, while this event does not have a wide variety of things we need to focus on, the things that do matter are incredibly PvP relevant. Grinding this event is important, but grinding the right things is even more important.

I won’t bury the lead any further, this may as well be called Shieldon and Dialga event.  If you were to ignore absolutely everything else, but ended up with the right IV Shieldon/Bastidon, the requisite XL candy to take it to/near level 50 and then a high enough IV Dialga for Master league, I would call this event a success for your PvP collection.  After that the really important spans are Beldum and Cranidos.

There are spawns worth grinding, checking and trading though, so let's take a beat to talk about the PvP offerings of Ultra Unlock Part 1: Time. 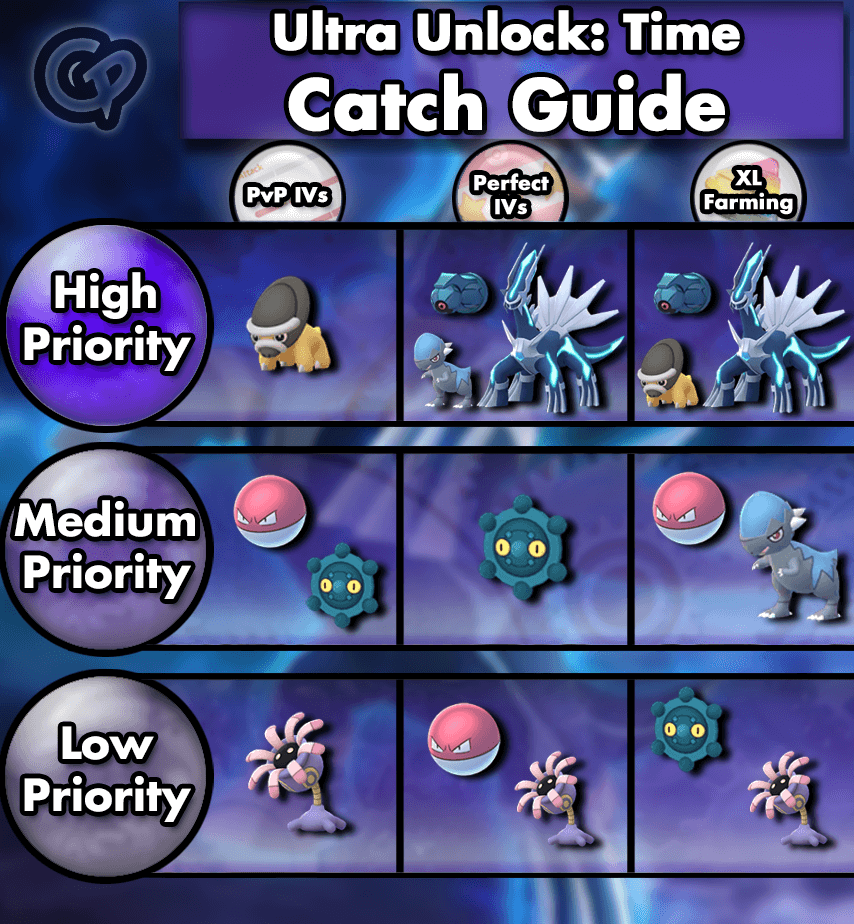 Another fantastic opportunity to farm Shieldon spawns and trades (with low friendship level friends) for a good XL Bastiodon.  How carefully and how zealously you will have to hoard and trade Shieldon for distance depends both on your current number of XL candy and how hard you are willing to grind the event.  If you are already pretty close to your target number of XL candy and you are able to catch a lot of Shieldon, then you will probably get to 296 naturally. The spawns are out there. If you are far away from completed, or aren’t that willing/able to grind Shieldon catches, you may need to treat every shieldon you catch like a precious commodity only to be traded for 3 candy distance.  Only you can know your own Shieldon situation, but your primary focus of the spawn portion of this event should be to end up with a) a good PvP IVs Bastiodon and B) enough XL candy (or very close to enough) to build it. Despite the theme of this event, there will be no time machine to redo this week if you blow it, so don't have any regrets and farm those little shield face dinos!

I probably don’t have to tell you this, but Dialga is one of if not the best picks for Master League.  There have been and will be many other resources that go into great Dialga Detail so I won’t say too much here. You want to make sure you end up with one with 15 Attack and at least 12 HP for IVs for the mirror match.  And don’t forget that you will need to best buddy it!  If you are so inclined to raid hard for XL candy and the new shiny, this wouldn't be the worst time to make it rain Remote and Premium passes as you Hundo Hunt.  The conserative route would be to at least use all your Free Passes on Dialga and then lucky trade to try and get the hundo.  Let’s see how many times I get the Dressed to Impress raid achievement this week.

Not originally announced, Beldum being such a common spawn in the event pool is pretty exciting. In the early days of Go Battle League, Metagross was a common, if not consistent, Dialga counter. While its star faded in open Masters, it quickly established itself as a top pick in the short lived Master Premier cup. The shadow variant is an amazing raid counter, so building up your candy XL/candy for this event can only be a good thing. The regular is generally preferred over Shadow in Masters, but the Shadow is far superior in raids. Getting to the ~600 XL you need to power up to Level 50 with one of each would be the best of both worlds, but a tough task to be sure.

Not much of a factor in Open Great League, Electrode tends to shine in limited formats such as Kanto cup.  With access to the powerful fast move Volt Switch and then the strong Discharge, the coverage move Foul Play, or the surprise nuke Hyper Beam for charge moves, this is an incredibly fun and surprisingly spammy mon to play when the meta is right.  Definitely worth stashing your best PvP IV Voltorb/Electrode for Great League.  A 100% Electrode is a spicy pick for Ultra, but not something I would stress over.

Generally outshined by other Confusion users.  Generally outshined by other Mud Slap users.  Claydol seems to suffer from being decent at a couple roles, but not really good at either of them.  Ice Beam and Shadow Ball were added as coverage charge move options and while that made Claydol a more interesting pick, it failed to make it relevant in Open Great League.  It can excel in Silph and GBL cup metas, so it’s worth holding onto a good PvP IV version nonetheless.  In my opinion the shiny alone makes this spawn worth grinding, so there's basically no downside to catching all the Baltoy you can.

The shadow variant is generally preferred for this Spicy Great League pick.  And even then it usually works best in more limited cup metas.  That being said, Grass/Rock is an interesting dual typing and with access to the hard hitting kit of Bullet Seed into Stone Edge/Grass Knot, it is worth stashing a good PvP IVs Cradily if you don’t have a shadow one.  Incredibly fringe Ultra Premier pick not worth stressing over.

Another mon that has little to no play in Open or even Remixed Great League.  Another mon that you usually want the shadow variant.  Another mon that has already been featured heavily in a reasonably recent event.  You see where this is going. When it sees play, it tends to be in metas where all the actually good Rock type attackers are banned out.  That being said, it is situationally useful and when it is, there is often no reasonable facsimile.  If you don’t have a shadow or one with good PvP IVs it may be worth your time to stash one away for a rocky day.

Egg Hatches and Raids Only

Somehow worse than Aerodactyl.  AMAZING attacker for raids, but leave Rampardos home when it comes to trainer battles. I’ll be catching all the Cranidos I can, but not for PvP reasons. Best of luck finding the shiny!

Bronzong is a decent, if fringe, pick in both Great League and Ultra Premier Cup.  Bronzor is a menace to society built to both dominate Open Little Cup and make Little Cup matches take ages, as Bronzor mirrors are painfully slow.  Ultra League Bronzong will cost you 200 some XL candy so think carefully before committing to that project.  My advice would be to end the event with a good Bronzong candidate for Great League, a lucky (shiny lucky??) to stash for Ultra League, a good Bronzor for Little cup, and as much XL candy as you can manage.  Keep in mind that you will have to trade (preferably with a low Friend Level friend) for PvP IVs

Porygon’s final evolution, Porygon Z, has some play BUT you may need access to the Professor's Delorean to make this pick work.  You will usually want either a shadow variant or a purified version with the STAB Return.  But even if you didn't want these Rocket Stop only Porygon, you would want the Community Day move Tri Attack.  Do yourself a favor and don’t worry about this spawn, as it is certainly not worth an Elite TM to use at its full capabilities.

Magneton with Raid Floor IVs will not be very good for Great League.  So unless Master League Premier comes back soon, or you REALLY want to rock Magneton in Ultra, there is not much reason to raid Magneton.  The magnet family is solid in PvP to be sure, but this is not the event to focus on them.

More like GoLurch.  Saw some limited play in Halloween Cup, but even then you would not want a Golurk from a raid.  Save yourself the passes and skip this raid for now.

This is a weird event in that I will be playing it a lot, but there’s only three spawns that I really care about. Luckily most of the other mons in the wild still bring something to the table so it won’t ever feel like I’m wasting my time out there.

I would especially worry about items 1 through 5. Other spawns either aren’t as important or seem to show up Time After Time.

I hope you have a great Ultra Unlock: Time event and I’ll see you back here when I break down the other Unlock spawn pools. Go get all the shield faces and may the shiny odds be ever in your favor.