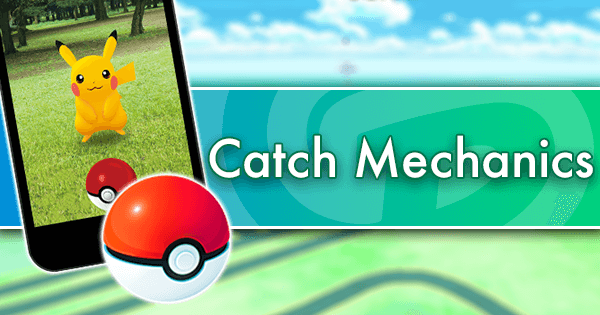 Catching Pokemon in Pokemon GO is simple: keep throwing Poke Balls until you catch the Pokemon.

Each time you hit the Pokemon with a ball, there is a probability it will be caught, which depends on the bonuses used. If the Pokemon is not caught, there is a chance it will run away.

The probability of catching a Pokemon depends on:

You can check out our Catch Mechanics Week article series for more detailed analysis.

The GamePress team analysed a large dataset to figure out exactly how each factor affects catch probability and interacts with each other. We discovered the general formula for catch probability, among other things. This page summarizes our findings.

Also, try the new GamePress Catch Calculator to see how all these variables affect your catch rate!

A qualitative understanding will be more helpful than just dropping the catch probability equation. The key takeaway from our catch bonuses research is:

Applying any kind of catch bonus effectively gives you the chance to throw more than one Poke Ball per try.

Just Give Me the Darn Equation!

Yessir! Here is the equation that determines catch probability. To check if a Pokemon is caught, the game generates a random number between 0 and 1. If that number is lower than the value given by the equation, you caught the Pokemon! Since this equation (after much work) includes every catch bonus, we call it the Grand Unified Catch Theory (GUCT):

That's quite a mouthful! Let's piece it together. Inside the parenthesis, you see

This formula is the probability of catching a pokemon with just a Poke Ball, no fancy bonuses. BaseCaptureRate is a number which depends on the species. And CPMultiplier reflects how high level / how high CP the Pokemon is. The value of BCR/2*CPM can go from about 2.7% for a level 30 Dragonite, to 298% for a level 1 Magikarp, in which case it is just reduced to 100% catch rate.

Let's continue. Since 1 - x gives the probability that x doesn't happen, we can rewrite the equation more simply:

Check it out: If Multipliers=2, then the equation equals the chance that you don't fail twice in a row with a Poke Ball catch. Since Multipliers is determined by which bonuses are used, this means that:

So bonuses will definitely increase your catch rate. But if you didn't have a 100% catch chance with a Poke Ball, you will never reach exactly 100% no matter what bonuses you have.

Grand Unified Catch Theory is more than a single formula, it also involves finding out the actual bonus multipliers. Here is a nice table of them:

For each bonus, if it wasn't used, the factor just equals 1 so it doesn't contribute.

What is this 2-r, you ask? The Throw bonus depends r, the radius of the colored target ring (from 1 to 0, with r=1 when target ring is same size as the white ring). That means the Throw bonus ranges from 1 to 2, as the size of target ring decrease in size. You must hit inside the inner circle to get a Throw bonus. No bonus is awarded when you land outside the circle.

One takeaway from the geometric sum is it depends on the ratio of P and F. Since F is fixed, the higher the value of P, the less chance for a Pokemon to flee before you can catch it. Stacking your bonuses is how you increase catch probability P.

Consider a level 30 Dragonite with 4% base capture rate and 5% flee rate:

These these numbers yourself with the Catch Calculator!

Color of the Inner Ring

The color of target ring gives some idea of catch probability. It reflects a partial solution of GUCT without curveball and throw bonuses. Let's call this probability BasicCatchRate. $$BasicCatchRate= 1- \left(1-\frac{BCR}{2*CPM} \right)^{Ball*Berry*Medal}$$ It translates to color as following: $$BasicCatchRate = \frac{1}{2}(1+(Green-Red)/255)$$
Where, These are the HTML hex color codes based on RGB values. The formula was deduced by taking screenshots of in-game catches and recording the pixel color of target ring, and then comparing to the catch rate value returned by the server for that catch.

To be complete in our analysis, we wanted to make sure that we accounted for all multipliers that are in the GUCT. We had data on a few other potential modifiers and wanted to test if they had any effect on capture rate. We conclude that the number of capture attempts, IVs and being from a lure have no direct effect on catch rates.

We could not use simple statistical methods to test this because capture attempt number would seem to decrease catch rate even if it had no effect on the catch rate formula. This is because Pokemon with high catch rates are more likely to be caught and therefore, have no subsequent capture attempts. To get around this problem, we used a mixed effects logistic regression. Essentially, this regression adjusts for ball capture rate when calculating if other factors influence catch rate.

If the GUCT is accurate and complete, we would expect all of the factors within GUCT to be statistically significant but none of the other factors to be significant. Additionally, if we add GUCT into the regression, the factors that make up GUCT would decrease in statistical significance. Our p-values summarized below are in line with this. Therefore, we have no statistical reason to believe that GUCT is incomplete.

Incorrect location data on caught Pokémon?
Has anyone noticed incorrect location data on Pokémon they’ve caught? I’ve had three…
Go Battle League : Season 13 ( Mythical Wishes )
Pokémon GO GO Battle League: Mythical Wishes Update –…
December, mainly Keldeo really
Looks like we get Keldeo (presumably the base-form, no SS) via research on the weekend…
2023 Community Day speculation
We have the release dates for the next set of Community Days and while the original…
What pokemon to best friend to 51?
I am just an average PVP player but have recently changed my ML squad. As a result I…
Read More