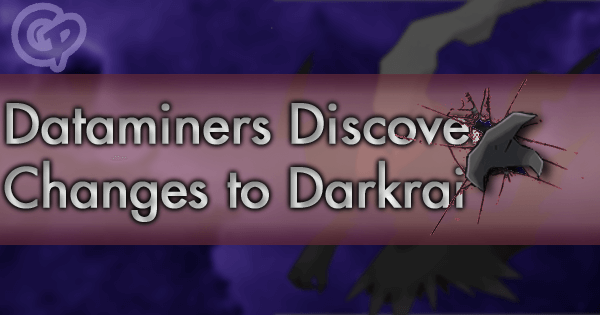 Darkai was just updated to be transferable.

Dataminers have discovered that an important bit of data related to the Mythical Pitch Black Pokemon, Darkrai, has been changed. Darkrai’s status has been changed to allow it to be transferred despite its status as a Mythical Pokemon. This change is very interesting as past Mythical Pokemon, such as Jirachi and Mew, have always been unable to be transferred due to the fact that each player is only able to catch one over the course of a Pokemon journey. The one exception to this is the mythical Deoxys, which has had the same status since its release in EX raids late last year.

Based on this, many are now speculating that Darkrai will make its long-awaited debut in EX raids following Shadow Ball Mewtwo’s encore.

While this is all speculation and no official sources have made any comments on Darkrai’s status or release date, we feel that now is a good time to take a look at the Mythical Dark Type, and attempt to get an idea as to just how much of an impact this living nightmare of a Pokemon is set to have on the metagame.

Changes can, and have happened to Pokemon before their initial release in-game, meaning this information could change before Darkrai's actual announcement 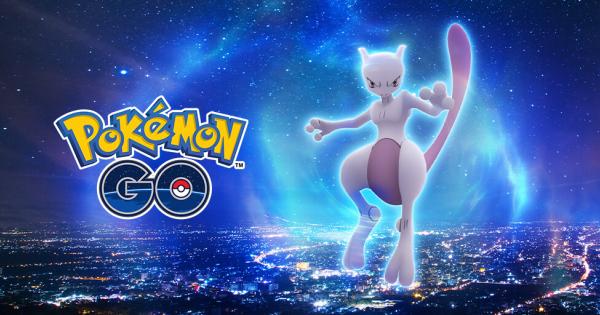 Mewtwo Returning to EX Raids from September 25 to November 12 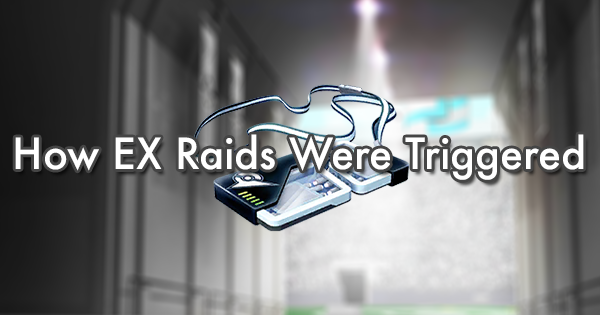 How EX Raids Were Triggered 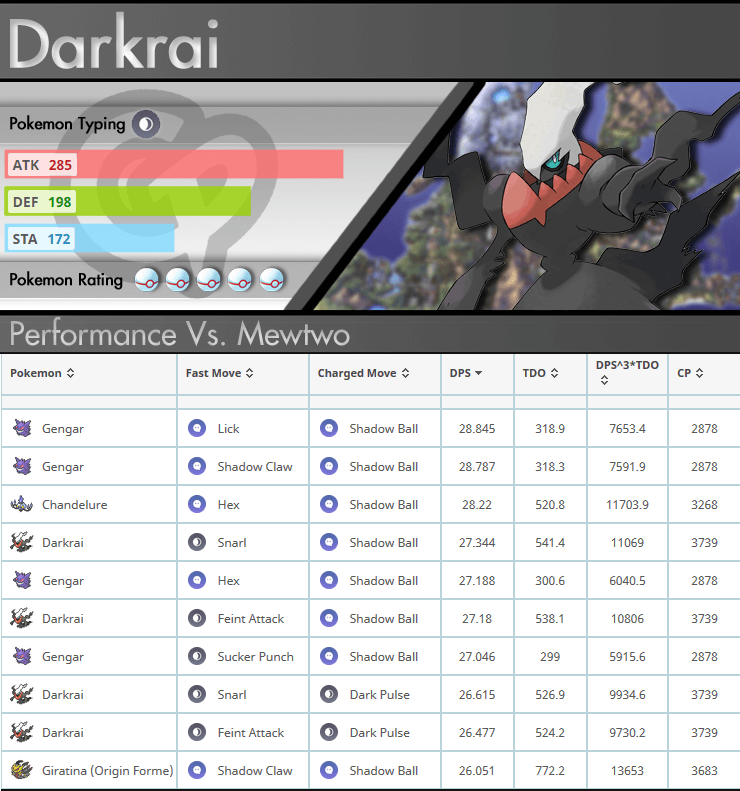 At first glance, Darkrai seems like just another option in one of the most flooded Pokemon categories in raids: a counter to Psychic and Ghost types. And in many ways, that would be correct: it doesn’t have the DPS of Gengar or the TDO of Giratina-O, but sort of blends the two together to a lesser degree. To many, Darkrai would look like another good option among many others vying for candy and dust, but don’t be fooled: Darkrai is a very quiet monster that's long been patiently awaiting its chance to dominate.

While Ghost and Psychic type counters consists of one of the most competitive metas, it's also arguably the most diverse due to the number of coverage options that Psychic and Ghost types tend to carry. Using Gengar? Confusion is your bane. Tyranitar? Watch out for Focus Blast. Giratina? Here comes a Shadow Ball or Ice Beam! And this is where Darkrai comes into play: up until now, Tyranitar has been the single strongest Dark type in overall terms, but its low DPS and secondary Rock typing have done it no favors. Darkrai, meanwhile, packs the added DPS with a single weakness to Fighting. For this reason, Darkrai is going to be a top counter to virtually any Ghost or Psychic Type that hits the raid scene; Darkrai compliments every other counter perfectly. A strong mix of Giratina-O, Gengar, Shadow Ball Mewtwo, Tyranitar, Chandelure, and Darkrai will be able to optimize any raid and allow for maximum impact no matter the moveset or play-style.

That said; Darkrai may not be worth the investment for some players. Despite its advantages and niches. Darkrai is not coming to us as the absolute top counter for every scenario, meaning not everyone will feel the need to further complement their Psychic/Ghost counter team. While it is a useful and powerful team-member to slot in for an appropriate raid, its cost may outweigh its added performance for an existing, strong team.

Despite being a Dark type Pokemon, all accurate sims will state that Darkrai has superior performance with Shadow Ball when compared to Dark Pulse. This is despite Dark Pulse gaining a STAB (Same Type Attack Bonus) boost where Shadow Ball does not. Let’s take a look at why, by first taking a look at the moves themselves: 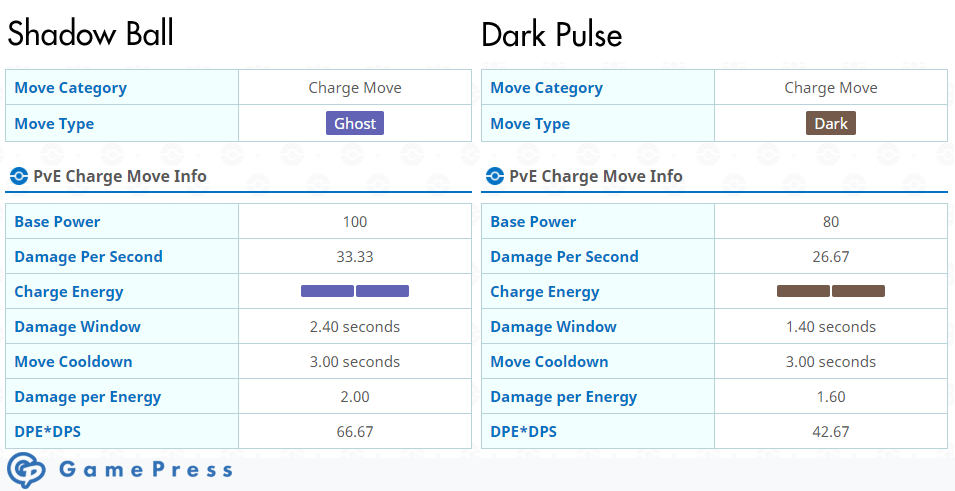 While Dark Pulse’s damage window is a full one second shorter, Shadow Ball trumps it by a full 20 base power. Sadly, the bonus from STAB is not enough to make up for this short-coming, so Shadow Ball turns out to be the stronger move in practice.

As far as weakness and resistances go, Ghost and Dark are remarkably alike. In fact, the only real differences on offense are that Dark is not very effective against Fighting and Fairy while Ghost deals neutral damage, and Ghost is fully ineffective against Normal types while Dark deals neutral damage. No Pokemon type combo can be double-weak to one but not the other, and the only realistic time that Dark Pulse will be used over Shadow Ball will be against Psychic/Normal types such as the Gen 5 Mythical Pokemon Meloetta’s Aria forme.

While if released as an EX raid boss Darkrai will not be capable of going below 1500 CP, it may be possible in the future. In Great League, the Pitch-Black Pokémon has issues. Its incredibly attack-weighted stat distribution gives it a Haunter-esque level of bulk, but without Haunter levels of speed. It suffers from very consistent losses to common threats like Deoxys-Defense, Altaria, Medicham, Bastiodon, Probopass….it’s honestly easier to list things that Darkrai can beat (Jirachi, Haunter, Froslass, Alolan Raichu). That said, pretty much anything Darkrai can beat also loses to other, more generally powerful threats. On the plus side, the only way to get a Great League Darkrai would be to trade a Lv15 one from research, and since Mythical Pokemon have traditionally been untradeable in the past, this likely will never be an issue.

In Ultra League, Darkrai remains probably too squishy for general use, but it does start to come into its own. Fairly strong matchups against Mewtwo, Metagross, and Giratina-Origin certainly make Darkrai a reasonable Pokémon to use, though it sadly lacks a super consistent win against Giratina-Altered, the most common Pokémon in the tier. For Ultra League, consider Darkrai a fairly niche pick, once again filling a role that’s otherwise filled better by other Pokémon.

In Master League, it’s...well, still pretty squishy. But not quite as bad as it was before! Beating Giratina-Altered and Giratina-Origin in all shield-even matchups and handling Mewtwo in all shield matchups except for 0-1 and 0-2, this mon definitely hits hard. Buuuuuut, it’s still got issues. First, like in the other two leagues, it doesn’t do anything uniquely powerful, as other anti-Ghost/anti-Psychic Pokémon exist that fill the role better. Second, as a Dark-type, it falls prey to the Fighting-type threats that exist to hold back Dialga, commonly considered to be the top Pokémon in the tier. While it can carry Focus Blast, the move is generally just too slow to accomplish much.

While we have no inkling of confirmation that Darkrai will indeed follow up Mewtwo as our next EX raid boss, it seems a very safe prediction that, at the very least, it will take its place as an invitational raid at some point in the future. It is definitely weighted more heavily towards PVE utility rather than PVP and will likely set itself as a dominant force moving forward, sitting as a Supreme counter to many relevant raids while picking up the slack that its team-mates may leave. Either way, only time will tell when this Nightmare will befall Pokemon Go, once again shifting the metagame in its wake.