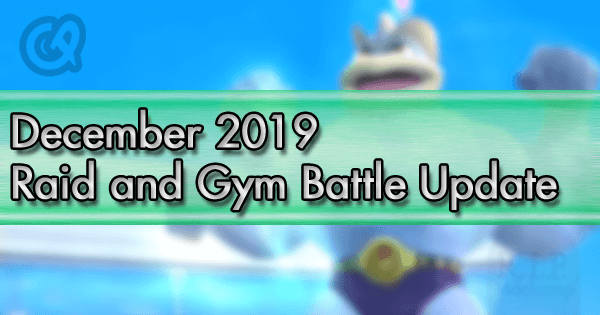 As announced by Niantic today, there are some major changes to combat mechanics. The update is live now, and changes the landscape of counters in both raids and Trainer Battles. In this article we’ll focus on the impact of the changes on raids and gym battles, and the Pokemon you’ll now want to prioritize when you’re deciding how to spend your Stardust.

This is easily the most impactful change to the raid meta provided by this update. Up till now, Lucario was stuck with Power-up Punch and Close Combat as Fighting charged moves, lacking the powerful Dynamic Punch that made Machamp, Breloom, and Hariyama the best fighters around. Pairing Counter with the new move Aura Sphere, Lucario is now the best Fighting-type in the game when it comes to raids, surpassing these three and Conkeldurr, which was in a position to take over the top spot upon release. It’s a sad day for Machamp, and time to start looking for a few Riolu to add to your raid squads. 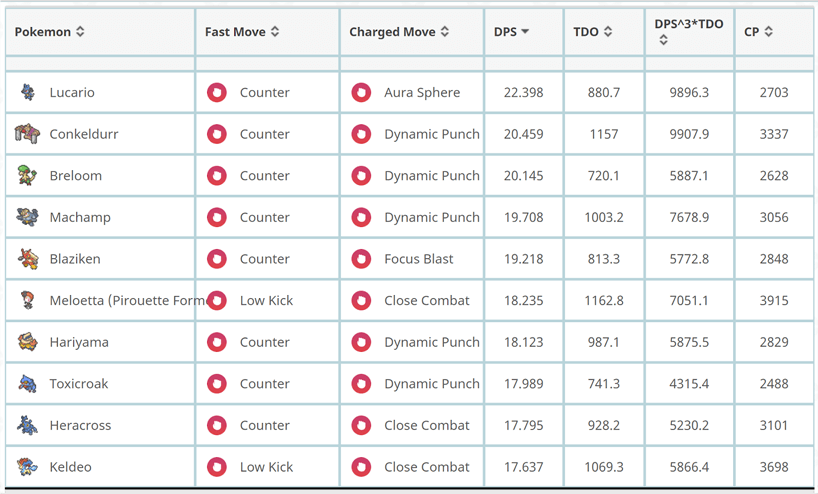 Just how good is Aura Sphere? In addition to beating up on Normal- and Dark- types, Lucario now offers the best DPS against both Ice-types and Rock-types in neutral conditions, with an even more commanding lead in the very common Cloudy weather. Its DPS advantage over Metagross isn’t enormous, but due to the prevalence of Cloudy weather in many areas, you’ll likely find yourself using them quite often. 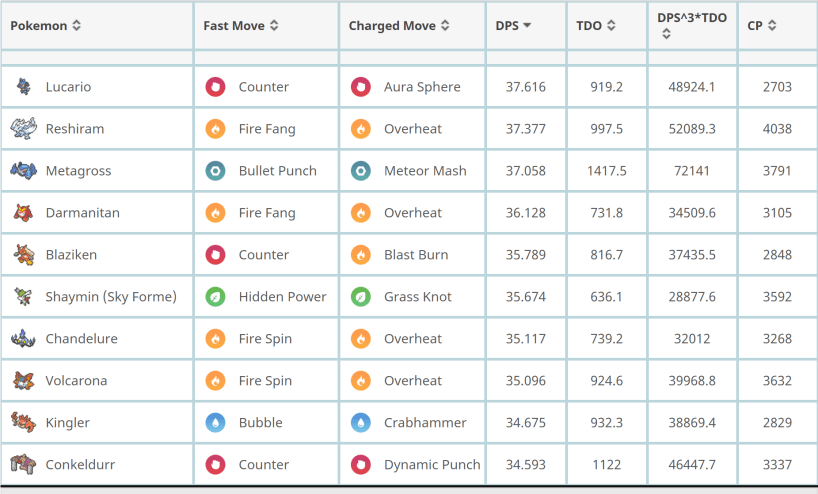 If you’ve never bothered with Lucario due to the slew of better options, now’s the time; Aura Sphere might just be the best charged move in the game.

Earthquake: Buffed from 120 damage to 140 damage

Mud-Slap: Buffed from 15 damage to 18 damage 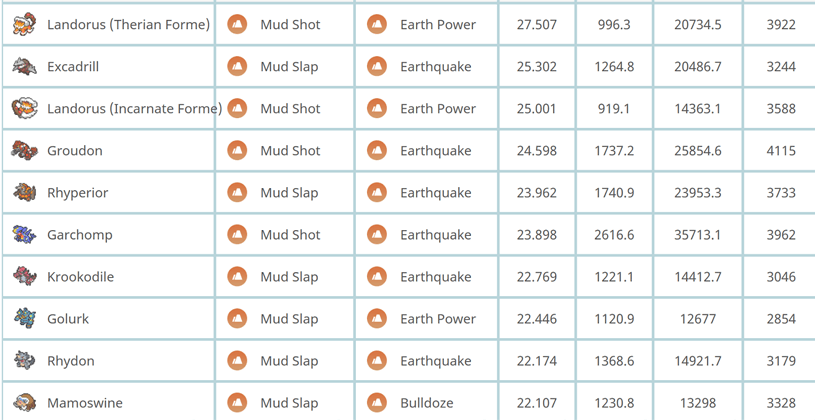 The next biggest and most complex shakeup comes to the landscape of Ground attackers. Both Earthquake and Mud-Slap had been among the worst moves in the game commonly used by top attackers, and the update definitely helps to rectify this. Earthquake’s buff makes it good, but not incredible, putting it roughly on par with the likes of Focus Blast and Zap Cannon and still a bit worse than Earth Power, especially when paired with Mud Shot. This buff is huge for Excadrill, Groudon, Garchomp, and Rhyperior, none of which have access to the stronger two-bar move.

As a fast move, Mud-Slap has long been one of the most painful to use since the game was released. A 20% buff sees it now an improvement over Mud Shot, making it the best Ground fast move in the game. This is especially important for Excadrill, which retains its place as the top DPS Ground attacker in the game, using Earthquake instead of the now-inferior Drill Run as a charged move.

Lost in all of this is Mamoswine, which received a buff with Mud-Slap, but now sees itself irrelevant as a Ground attacker because Bulldoze is even worse than Drill Run. Meanwhile, Rhyperior, seeing both of its moves buffed, becomes about even with Garchomp in Ground DPS.

Theoretical comparison of Ground move sets, (simmed against Jolteon) (note: Groudon still does not have access to Mud-Slap, Drill Run, or Earth Power).

While Ground-types have historically only had a role as Electric-counters, these buffs now make them viable attackers into both Fire-types and Rock-types, even without clear weather. In neutral weather conditions, Excadrill is now the fourth-best counter to Flareon by DPS, trailing only Rampardos, Kingler, and Kyogre, while Groudon, Rhyperior, and Garchomp are now about on par with legacy Feraligatr. Most importantly, though, Ground is now the best choice against Fire and Rock in clear weather, with Excadrill surpassing Rampardos against Fire and Roserade against Rock.

Bottomline: Excadrill retains its place as the top DPS Ground attacker, while Groudon, Rhyperior, and Garchomp have closed the gap and offer much better TDO. Ground is now viable against Rock- and Fire- types, with Excadrill the top-DPS counter in clear weather. Before you go powering up a bunch of Excadrill or Groudon, though, remember that Landorus will overtake them both.

Waterfall with Hydro Pump is a painful combination, slow and lacking in synergy, and upon the release of Crabhammer, Kyogre was recently eclipsed by Kingler as the fastest Water-type in the game. Kyogre gaining access to Surf does not help it retake the Water DPS throne from Kingler, but it does cut the gap in half, to the point Kyogre might just be a better choice than Kingler overall in many situations. The TDO advantage is enormous, and access to a solid two-bar moves means Kyogre’s DPS is more consistent and less painful to use. If you thought your resources spent on the big whale were wasted, this update should make you feel better. 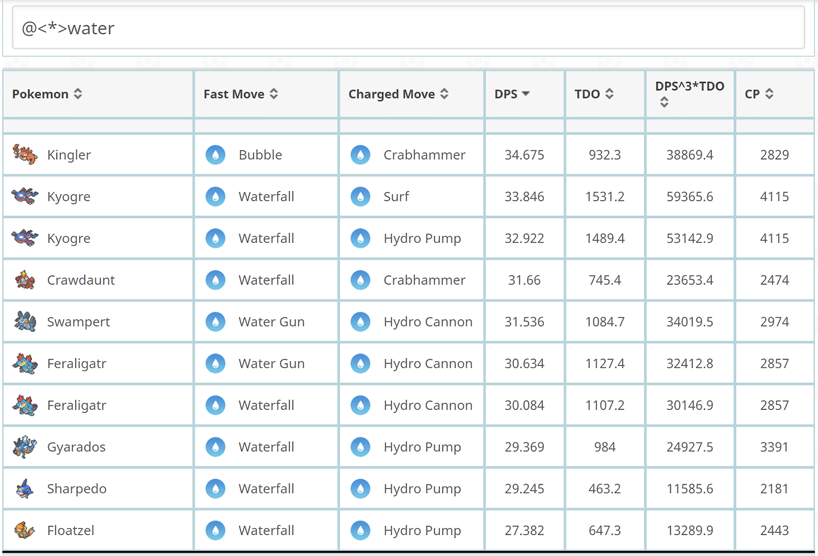 Finally, Gengar is given a permanent strong fast move! Unavailable for about two years now, Gengar with Shadow Claw is a solid alternative to Lick for anyone who missed the exclusive raid day or otherwise has invested in Gengar with Hex. Simulations indicate that the better move between the two is situational and depends heavily on boss charged move cycles, so don’t go TMing Lick away! If you do have Hex or Sucker Punch Gengar powered up, though, you definitely can TM those away in favor of Shadow Claw. Gengar is the top DPS Ghost/Dark-type with either move, but its lead over the field has diminished in recent months due to the additional bulk and better typing of Chandelure, Giratina, and Darkrai.

Gymming is still necessary for getting those 50 daily coins, and many players take pride in amassing dozens and dozens of gold gyms. The December rebalance

n addition to being the best Fighting-type for raid battles, Lucario is now the most useful gym attackers as well, again replacing Machamp in this role. Paired with Counter, Aura Sphere provides an upgrade over Machamp’s Dynamic Punch, and its Steel secondary-typing means Lucario only takes neutral damage from Blissey’s Psychic and Fairy moves. Say hello to the new top dog in your gym battle party.

If you’re using Dragonite either to take down a gym or to defend a gym, Dragon Claw offers faster activation than Outrage and can get the job done a bit faster and put more pressure on attackers, despite being a worse PvE move on the whole. Dragon Breath doesn’t really help with either, but it’s fun, if you want to go that route. If you want a Dragon in your gym battle party, Dragonite’s bulk and access to the spammy Dragon Claw makes it an excellent choice.

Probably Snorlax’s best defensive move, if you’re using it as a defender. Still not worth using to attack gyms, of course.

Now you don’t have to wait an eternity to launch a Hydro Pump! This makes battling with Kyogre much less painful.

The following changes are relevant only for those interested in PokeDraft (or PvP), but should normally have very little bearing on the counters most people choose.

Changes That Don’t Really Help Anyone

The following changes provide Pokemon with useful coverage moves or otherwise have the possibility of providing improvements in PvP, but don’t really have any impact on raids or gym battles: