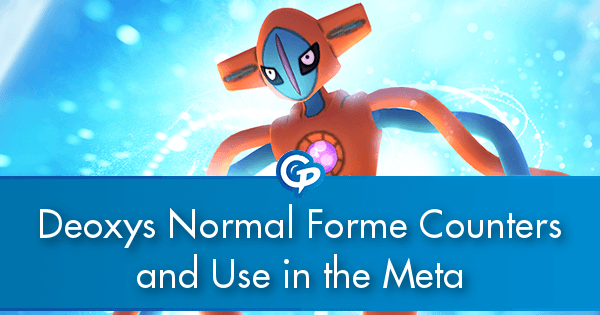 Starting October 2nd, Deoxys will be available in Pokemon GO as an EX raid boss. One thing that makes Deoxys intriguing is its different formes. Just as Castform has four different formes that differ by type, Deoxys has four different formes that differ in stats. These formes are Deoxys-Normal, Deoxys-Attack, Deoxys-Defense, and Deoxys-Speed. While all four formes appear to be weaker than Mewtwo, Deoxys-Attack boasts the highest damage ceiling in all of Pokemon GO! Naturally, trainers have been asking how to best prepare for this raid and just how useful these Deoxys formes will prove to be. 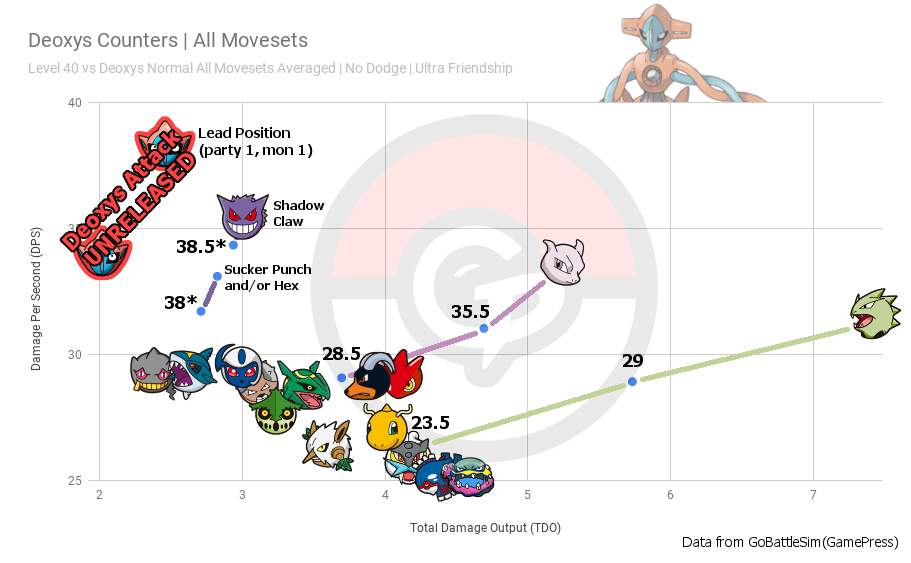 The counters to Deoxys are exactly the same as the counters to Mewtwo. Overall, Deoxys can be seen as “easy mode Mewtwo.” In the current game master, Deoxys-Normal has Psycho Boost, Thunderbolt, and Hyper Beam as charge moves which means Tyranitar can enter any fight with impunity. As long as you streamline your Tyranitars you shouldn’t have a problem with this fight. If you want an extra edge in DPS, legacy Shadow Ball Mewtwo and Shadow Claw Gengar will get the fight done faster. If you don’t have Shadow Claw, Hex and Sucker Punch are both great alternative options and are roughly equal in performance.

If you lack the aforementioned Pokemon, using almost any “good” attacker in Pokemon GO should fit the bill. Scizor, Houndoom, Dragonite, and Rayquaza stand out amongst the pack, but keep in mind that unless weather boosted, most alternative counters to Deoxys will only be as good as a level 29 Bite+Crunch Tyranitar when at level 40.

You may notice “Deoxys-A Lead Only” above Shadow Claw Gengar in DPS. While we currently aren’t able to obtain Deoxys-Attack, when we get it it will have the highest damage potential but only when in the lead slot. This is because Deoxys-A’s defenses are so low that it cannot withstand charge moves, so its only chance to consistently dish out high amounts of damage is at the very beginning of the fight when the raid boss takes the longest amount of time to launch a charge move. Deoxys-A’s status will be elaborated on more in the next section of this article.

Overall, Deoxys’ Attack forme (currently unreleased) is the only one of the bunch that has any real utility in Pokemon GO. In the main series games, Deoxys’ non-normal formes were meant to max-min their attributes in attack, defense, and speed respectively. Given that you cannot put legendary Pokemon into gyms the defense forme is entirely useless. Also, because Pokemon GO doesn’t give the speed stat much weight, the speed forme of Deoxys only has borderline utility and is ultimately crushed by its poor movepool. This leaves us with Deoxys’s normal and attack formes for offensive potential, and Deoxys-Attack is max-mined to the tee.

Clocking in with 414 base attack, Deoxys-Attack makes Mewtwo’s 300 base attack look puny. Its weakness? 46 base defense. To put this in perspective, Gengar, the OG glass cannon, has 156 base defense. This means that even though Deoxys-Attack has the highest damage potential of all Pokemon currently released in Pokemon GO, it’s going to have a hard time sticking around in battle. Deoxy’s Normal forme is similar to Attack, but cuts its busted attack stat down to 345 while bolstering its defenses up to an almost-decent 117.

You would think that with these extreme attack stats Deoxys-Attack and Normal would become meta-defining attackers, but if you take a moment to poke around Pokebattler you’ll find that they aren’t doing so hot. The two main factors holding back their performance is

While tankier Pokemon can salvage some utility from extremely slow charge moves, 46 and 117 base defense isn’t enough. This limits Deoxys’s Attack and Normal formes to Dark Pulse and Thunderbolt respectively. Since Electric-type damage has almost no utility for non-Electric-type attackers in Pokemon GO, only Deoxys’ Attack forme stands out in the meta.

As noted in the previous section, Deoxys Normal Forme has very little utility in Pokemon GO. It can stand out as a glass cannon against raids that are weak to Thunderbolt, but Raikou, Zapdos, and Mewtwo will always be better options. Despite having the highest attack stat of all Pokemon currently released in Pokemon GO, not being able to take a hit really holds it back from the great. As far as its signature move Psycho Boost goes, the 4 second cooldown blunts it to the point where Thunderbolt is often as good if not better than it vs targets weak to Psychic-type damage. If Psycho Boost were to get a buff, then Deoxys-N’s status could change. Until then, it’s borderline hot garbage. I guess it’s a good time to collect candies for the Attack Forme?

Overall, the Deoxys raid can be seen as easy mode Mewtwo. However, don’t be fooled into thinking each raid will be a free lunch. While 117 base defense is laughable, 345 base attack backed up by powerful single bar charge moves will put the hurt on your revive stores. If you don’t already have a nice line up of Bite + Crunch Tyranitars you may want to start looking for trades.

For those who want a meta relevant Deoxys, we will have to wait until Pokemon GO releases the Attack Forme. Given the unique circumstances of Deoxys-Attack’s “best in lead” status, a deeper investigation will need to take place in order to fully assess its usefulness in the meta. At this time Deoxys-Attack is only predicted to be good at leading in Deoxys and Psycho Cut Mewtwo raids. Stay tuned for updates!