Dialga in the Raid and Trainer Battle Meta 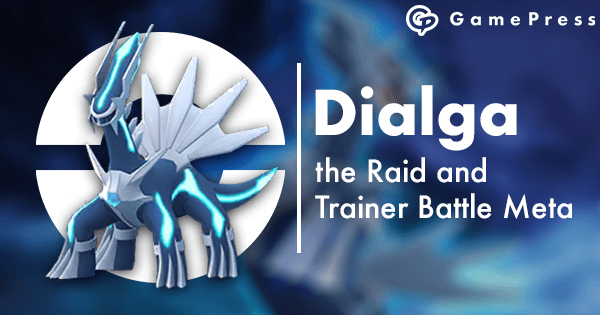 From March 1st until March 28th, the Legendary God of Time Dialga is the boss to beat in our Tier 5 raid pool. Unlike last month’s Legendary God Waste of Space Palkia, Dialga actually has some serious utility in both raid and PvP content- mainly as a Dragon who isn’t weak to Dragon-type counters. Given the unique utility present in Dialga, it would be mindful to stock up before time runs out!

To help you in this endeavor, the article below details how to best beat down Dialga. The key thing to note is that you should treat it more like a Steel-type than a Dragon-type Pokemon. 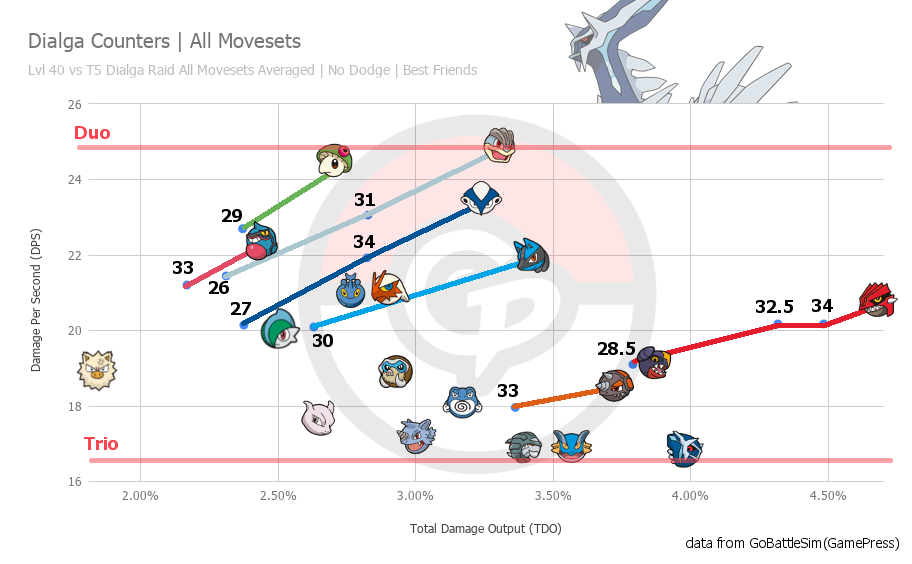 The best Pokemon to use to beat down Dialga is undoubtedly Machamp. Breloom and Hariyama are great runners up but they pale in comparison to the Champ. The main moveset for all three is Counter and Dynamic Punch. If you have any legacy moves on your Machamp, such as Karate Chop or Cross Chop, those work just as well. Groudon is also an excellent choice if you favor tankiness over speed and is a more optimal choice under clear weather conditions. If you don’t have an army of Machamp, Hariyama, and Breloom at this stage in the game, any Fighting-type Pokemon will serve well in this fight.

If you’re curious why Fighting and Ground-type Pokemon are the best choices for this Dragon-type raid, it’s because Dialga is also a Steel-type Pokemon. So put your Dragon, Ice, and Fairy-type Pokemon away trainers! Dialga’s Steel-typing means it can and will hit all three of the typical Dragon-type counters for super effective damage while only taking neutral damage from their attacks. Fortunately, this Steel-typing opens a weakness to the ubiquitous gym slayer Machamp.

Dialga in the Meta

As a Dragon-type Pokemon that isn’t weak to Dragon-type damage, Dialga will be a very powerful addition to any players roster. In terms of bulk combined with damage, Dialga will be a topmost counter to every Tier 5 Dragon-type Pokemon but itself and Rayquaza (due to Ice-types dominating it so heavily). That said, Dragonite will still be a better budget option and Rayquaza will still have more speed in combat. If you don’t already have 6 high-level Dragonite, Rayquaza, Salamence, Latios, or Palkia, then powering up Dialga is a good idea to flesh out your Dragon-type team. If you’re already set, then you may want to save your stardust unless you have trainer battle goals in the Master League.

Prior to Dialga’s release, Giratina-A was the definitive Master League God. While Giratina is still a potent force in the meta, the crown now goes to Dialga. The rationale behind Dialga’s coronation lies within its whomping 10 resistances, access to Dragon Breath, 1/31’s buff to Iron Head, and the current states of the meta. Giratina-A, Lugia, Kyogre, Melmetal, Mewtwo, Dragonite, Mamoswine, and Latios are all potent and popular options for PvP and Dialga has all of them pinned. If you’re concerned about facing Dialga, Groudon, Metagross, Heatran, and Swampert stand out as counters to this metal monstrosity. And while Machamp can’t punch through Ghosts, its muscles can punch through Time.

Dialga is a great legendary Pokemon for players to stock up on and invest in. It’s utility in both raid and PvP content as a Dragon-type Pokemon with no Dragon, Ice, or Fairy-type weakness cannot be understated. Don’t feel obligated to spend your hard earned stardust though. If you already have your Dragon-type squad set, choosing to not invest in Dialga won’t hold you back at all. That said, it wouldn’t hurt to stock up on them just in case you change your mind down the line. You may want to dust off your Machamps and get catching before time runs out!