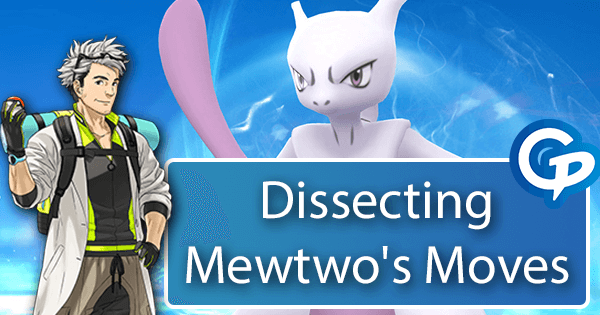 Mewtwo is one of the most powerful Pokemon in Pokemon GO, if not THE most powerful. Sporting the highest attack stat in the game, almost any move set on Mewtwo could be considered viable in various situations. Shadow Ball, Mewtwo’s strongest charged move, makes Mewtwo a top 4-6 counter for a variety of raid bosses, even while not providing STAB (same type attack bonus) or SE (super effective) damage.

Recently, Niantic announced via Twitter that Shadow Ball and Hyper Beam will become exclusive moves for Mewtwo caught in EX Raids. This is the first time a legacy move has been announced beforehand so “Be sure to use a Charged TM before September 20 at 1 p.m. PDT” if you want to guarantee you have these moves on your Mewtwo.

This article will take an in-depth look at the battle mechanics in Pokemon GO to help understand when to use certain movesets on Mewtwo and what exactly makes Mewtwo such a powerful attacker. First, let’s take a look a Mewtwo’s impressive stats. In Pokemon GO, a Pokemon’s strength is determined solely by its typing, stats, and possible moves. 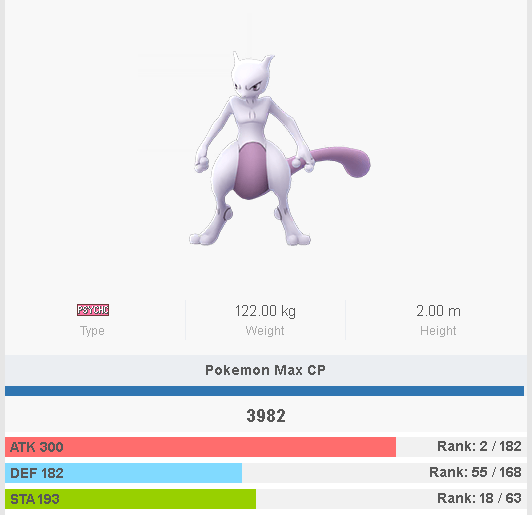 CP is simply a calculation that estimates battle performance and has no impact on battle. It is interesting to note though that Mewtwo was the first Pokemon to receive a 9% nerf to all its stats as the first Pokemon to break 4k CP pre-nerf. The most important stat is its attack. Attack and damage per second (DPS) is the most measurably rewarded metric in the game when it comes to being able to defeat a Raid Boss.

I stress Mewtwo’s high attack because STAB and SE isn’t the be all end all. Those interesting in delving deep into damage mechanics can read more here. In short, weather and STAB provide a 1.2x multiplier while SE brings a 1.4x times multiplier. Obviously these multipliers add up but there are many examples when Mewtwo's high attack can outweigh the gains from these multipliers. We’ll use the term “generalist” to describe Pokemon that may not be SE, yet still perform as a top counter in specific or a variety of situations.

Generalists can often find themselves as a top raid counter and make their way into a variety of battle parties. For this reason, a generalist (or six) can be a great early investment as maxing out these Pokemon can be more reasonable and beneficial than using other raid counters, especially if you’re not planning on maxing those out. Check out or Comprehensive DPS/TDO Spreadsheet to play around with Pokemon that may make some good generalists in different weathers and against different types.

As a quick example, a level 40 Mewtwo has a higher DPS at level 40 against Kyogre than all Level 25 Pokemon and at level 30, only Raikou and Zapdos outclass it. Since these Pokemon all compete with each other for your Rare Candy, Mewtwo may be a better option because you will be able to continue to use it when the legendary raid boss rotates. It is certainly a better addition to a battle party than a level 30 Venusaur or Jolteon. These examples come up on a regular basis with Mewtwo and other generalists, making them a great investment.

The other factor for battle effectiveness is available moves. Let’s take a look at Mewtwo options.

Moves in Pokemon GO each have an individual type, power, energy gain or loss, and cooldown. Mewtwo’s two fast moves, Confusion and Psycho Cut, have the trade-off between DPS and energy per second (EPS) respectively, each of which is more useful in certain situations.

Confusion is a more powerful but slower Fast Move. Psycho Cut is weaker but it’s significantly faster cooldown means it can be used more often. Even though PC is almost 3 times faster, the move is 4 times weaker. Both moves have their merits, but understanding the key mechanics behind this is important to making the most out of your Mewtwo. So when do we want higher DPS and when do we want higher EPS? Let’s start with the easiest example.

Psychic Mewtwo is the highest DPS Psychic-type attacker. Against any Psychic-weak Pokemon - Fighting and Poison types - Mewtwo is the undisputed king. Use for Mewtwo as a Psychic attacker will exist even after other moves become legacy in the future. Even a single Mewtwo can solo a Machamp raid (with some dodging and reentry).

As for which fast move to pair with Mewtwo’s Psychic, always use Confusion when using Mewtwo as a Psychic attacker. Confusion will deal more damage when SE but Psycho Cut won’t gain more energy. Using Psycho Cut when Psychic is SE is comparable to using the wrong charged move in terms of DPS.

Though this is Mewtwo’s only STAB charged move, it only outperforms the other charged moves when SE or when weather boosted. In the wind, Mewtwo ranks behind Rayquaza, Salamence, and Dragonite, leaving Mewtwo as the fourth best windy generalist.

Let’s next discuss the other Charge Move not leaving us. As a generalist in Cloudy weather, we have multiple better options. Many Pokemon with Fighting fast moves will outperform it.

What is noteworthy about Mewtwo on this list is A) its unique defensive typing and B) its higher TDO. Mewtwo ranks as the highest DPS*TDO cloudy generalist, which actually has some uses.* Where Mewtwo stands out is as a bulkier counter to Blissey (resisting her moves) and other commonly Fighting-weak gym defenders. For Normal-type gym clearing Mewtwo provides a little more survivability. Use as a generalist is less beneficial here, as Machamp continually remains one of GamePress's most recommended investments.

For battling Normal-types, Psycho Cut is usually the preferable option because it allows you to more quickly charge up Focus Blasts and even allows for some dodging. There are several scenarios though where you may consider using Confusion. When fighting against a mix of defending types the added DPS from Confusion can help, as well as in windy weather. Confusion has some merits when paired with Focus Blast.

In raid battles weak to Fighting, Confusion + Focus Blast is usually the better option. This can be dependent on various breakpoints though and for specific examples, you are best off simulating results beforehand using GoBattleSim. Some of these cases are extremely close and tend to favor PC+FB in cloudy weather, C+FB in windy. Another thing to consider is Pokemon that are weak to Fighting but resist Psychic, like Steel-type Pokemon. Against these, always use Psycho Cut. Neither fast move will deal much damage so go for the move that generates more energy.

The last scenarios to consider are unlikely to come up any time soon but eventually, there will be Pokemon weak to both Psychic and Fighting-type moves. Confusion + Focus Blast Mewtwo is highest DPS Pokemon in the game against Pokemon weak to both moves. C+FB has a DPS of 23.16 compared to C+P’s 22.95 DPS. While windy, again, the double Psychic moveset will outperform.

List of future Pokemon weak to both Psychic and Fighting-type moves:

Examples of when to use C+SB Mewtwo include Raikou, Kyogre, Entei, and Groudon raids. These Pokemon are all single-type making options for other top counters limited. In windy weather, pure Psychic Mewtwo outperforms Shadow Ball Mewtwo.

* In cloudy weather, Shadow Ball actually usually makes a better generalist than Focus Blast. This is because of energy loss previously mentioned, as boosted Focus Blast is very close in DPS to Shadow Ball.

Always use Psycho Cut when Shadow Ball is SE against Psychic-type Pokemon. Against Latios, Latias, Lugia, Mewtwo itself, and others, use PC+SB. When Psychic is resisted, prioritize energy gains through Psycho Cut. Gen 4 brings at least 4 legendary Psychic Pokemon and at least 1 Ghost-type, all great options for Shadow Ball Mewtwo’s future use. Mewtwo’s unique position as a Psychic-type Ghost attacker will give it niche applications as a Shadow Ball user for some time, especially when its competition, Gengar, is weak to Psychic.

Against Ghost-type Pokemon, Psycho Cut and Confusion provide very similar DPS with breakpoints again deciding the better move for specific examples. Gengar and the Mythical Fighting Ghost Marshadow from Gen 7 are the only Pokemon weak to both Psychic and Ghost-type attacks. Use Confusion + Shadow Ball for the highest DPS since both are SE against Gengar and Marshadow.

Ultimately, as this move is about to become legacy, spend as many Charged TMs as you can to make sure you have a few Shadow Ball Mewtwo. TM a few extra too for a great tradable Pokemon. There are many benefits from the type coverage as well as the high damage from Mewtwo's only 2-bar charged move.

Our notes on Hyper Beam originally read “Hyper Beam is definitely Mewtwo’s worst charge move and one of the best uses of a Charged TM.” After this announcement, not too much changes.

In partly cloudy Hyper Beam performs similarly to Shadow Ball. As discussed for Focus Blast, this will favor the 2-bar move on average. In addition, Hyper Beam will never be SE, meaning it also has no other niche. If you have TMs, there's also the opportunity cost of obtaining another Shadow Ball Mewtwo. You’ll have to decide if that’s worth it to you. One for the collection and another for trading purposes is potentially even overkill, but decide that yourself based on your available Charged TMs.

As far as what fast moves to pair it with, consider Psycho Cut and Confusion the same way you did when paired with Focus Blast, though Confusion likely gets the nod, as Hyper Beam’s damage isn’t anything too impressive that it’s worth charging.

We'll be updating this space soon with info on how Mewtwo functions with the new charged moves Flamethrower, Ice Beam, and Thunderbolt.

With the rumors circulating that Deoxys will be our next EX Raid Boss, it’s unlikely that Shadow Ball Mewtwo is available against any time soon so make sure to use this time before September 20th 1 PM PDT to get and use Charged TMs to maximize your Shadow Ball Mewtwo count for the future. Remember that raid rewards are linked to Premier Balls so check out our Tier 5 raid guides for tips on maximizing Charged TMs the next few days. And good luck rerolling for Shadow Ball.

While TMing, it’s advised to have a good internet connection. Start by TMing your most important (IV or level) Mewtwo and work your way down. It takes an average of 3 TMs to receive the desired charged move with a 95% confidence interval after 8 TMs, but it could always take more.

Moving forward, Mewtwo will continue to be the best Psychic attacker in the game for those players who find themselves with their first Mewtwo during the upcoming Mewtwo month mass release. Keep in mind that once you have a Mewtwo you can begin to trade for legacy Shadow Ball Mewtwo at a reduced cost. Additional resources to consider are our overview considering its mass release and the meta, our Mewtwo raid counter guide, and our Mewtwo trio guide for shortmanning.