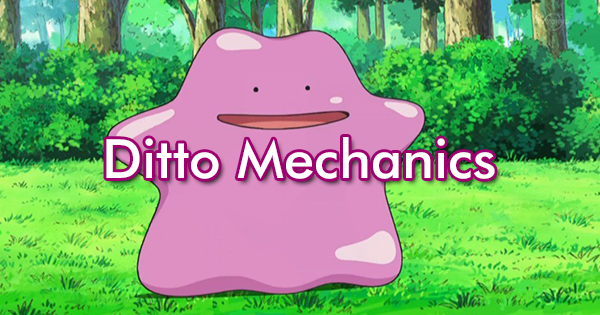 Ditto was the first new Pokemon added to Pokemon GO after its release, and it's a strange one indeed!

Just as in the main series, Ditto has the unique ability to transform into any Pokemon it encounters. This signature ability makes Ditto play very differently from other Pokemon in Pokemon GO. In this article, we'll go over how this difference impacts gameplay.

GamePress would like to acknowledge Trainers /u/paanvaannd and Sedare of Spokane for their contributions to the original article.

If you successfully catch a Ditto, it'll reveal itself:

If you fled from the Ditto encounter, Ditto won't register in your Pokedex. Fleeing and checking your Pokedex is not a good way to check for Ditto.

There is no way to know whether you have encountered a Ditto until you try catching it. Its target ring colors are faked to match the catch rate of its disguise (click here on how the ring colors work). However, Trainer Sedare notified GamePress that Ditto is much harder to catch than the common Pokemon it disguises as.

Ditto has a Base Capture Rate (BCR) of 16%, among the lowest in-game for an unevolved Pokemon. In comparison, the common Pokemon it disguises as all have BCR of 40% or 56%. This means Ditto is 3–4 times harder to catch. If you throw an excellent curved Ultra Ball and that Pidgey still breaks out, it might be a Ditto (or knowing your luck, it might not).

For more on how catch rate works, see Catch Mechanics.

For a less mathy version, try the Catch Calculator.

You can catch Ditto with the Pokemon GO Plus. Since the GO Plus is a good way to catch a lot of common Pokemon relatively quickly, it's an effective way to find Ditto.

For Ditto, the GO Plus won't flash yellow to alert you of a Pokemon new to your Pokedex. Of course, you won't benefit from any throw bonuses when you do find a Ditto with the GO Plus, and you only get one chance at it. You won't see the Ditto unveil animation when using the GO Plus either.

The only way to know whether a Ditto has fled from you while using the GO Plus is by checking whether the number of Ditto "Seen" in its Pokedex entry increased.

A Ditto vs Ditto fight is cute but kind of pointless. In this particular instance, Transform always dealt 1 damage, but they can use Struggle at anytime, which has been updated to no longer require any energy. When one Ditto faints or switch out, the winner transforms into its next opponent.

Ditto only uses Transform once, at the start of the fight (unless it's fighting another Ditto). When fighting another Pokemon, it'll immediately transform without any input required, copying the opponent's:

When using Ditto against raid bosses, some trainers have posted videos showing that the Ditto becomes a Pidgey or Rattata instead of the raid boss (although other videos do show DItto successfully Transforming into the raid boss).

The following are unchanged for Ditto after transform:

Ditto's CP will update to reflect all base stats of the other Pokemon even though its own base stamina is still used. As such, your 400 CP Ditto might transform into a 2027 CP Dragonite in a fight. It will not transform again for the remainder of the fight.  When your gym match ends, Ditto will return to its original self.

It's worth noting here that the Transform animation is only visual. Ditto instantly transforms into its opponent at the start of a fight, even though it appears to take a second to do so. As an attacker, you can tap to attack or swipe to dodge right away without waiting for Ditto to finish transforming. As a defender, Ditto will attack with the same pattern as any regular defender.

There is a visual bug to take note of: when Ditto finishes transforming, it appears to regain all of its lost HP taken during transformation. This HP restoration never really happens. When Ditto next gets hit by an attack, its HP bar will update with the correct amount of remaining HP.

Because of Ditto's paper-thin stamina, using it on offense is more fun than optimal. A perfect IV level 30 Ditto only has 81 HP to work with, for example. If you choose to use it, you want to have a high level Ditto. Transform into an opponent that can dish out damage fast, while you dodge until you faint.

Ditto spawns appear to be fairly rare, and nobody has found a Ditto egg or Ditto nest yet. As such, Ditto candies can be hard to come by.

The only way to get Ditto candies consistently is by making Ditto your buddy. A Ditto buddy will produce a DItto candy every 3 km. If you want a max level Ditto, consider getting a Ditto buddy.