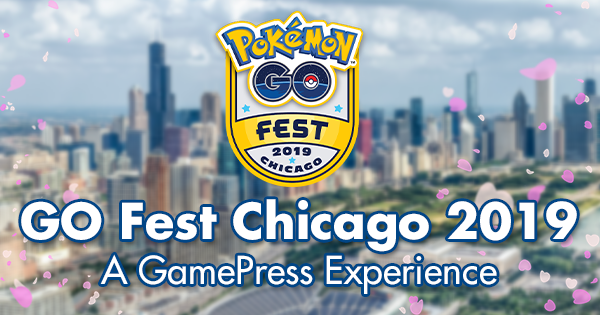 The 3rd installation of Niantic’s Pokemon Go Fest was held in Chicago, running from June 13th through 16th. While there were a few minor hiccups, it is pretty clear that this was the most successful Go Fest to date, with Niantic truly listening to its players and making improvements over the previous two versions. Personally, this is my second year attending, and in spite of loving 2018, I thought 2019 was significantly more fun. 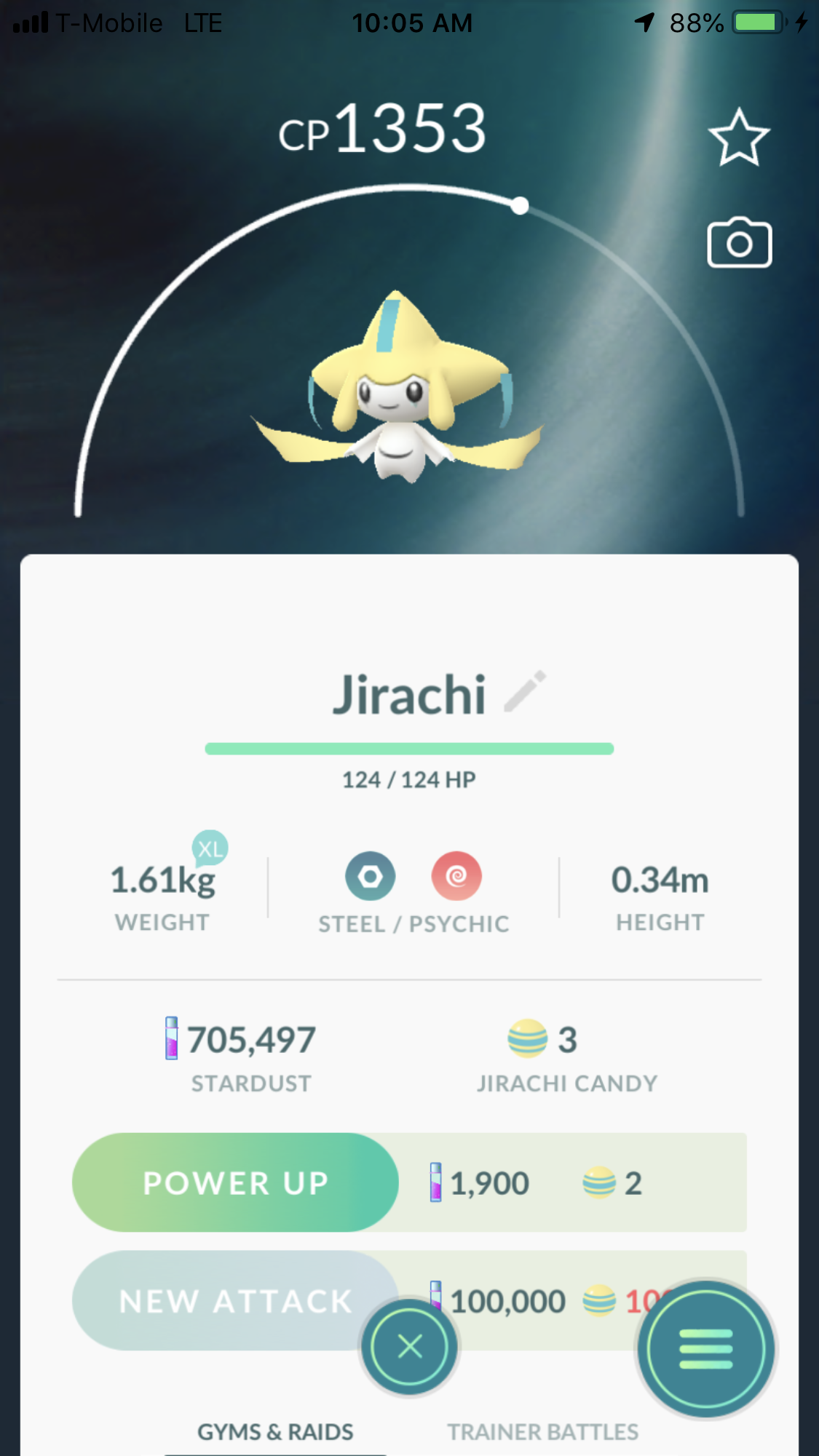 The primary storyline of Go Fest was the new Jirachi quest. It focused on biomes and discussed while some Pokemon are outside their normal location. Trainers had to “bring back” Pokemon like Gastly or Ralts to their proper home by taking pictures of them in their correct biome. The snapshots yielded some fun Photobombs like Loudred and Gardevoir, and the tasks were extremely rewarding. Dust, lures, Pokeballs, and even incubators were plentiful.

Five biomes were featured this year, which offered players plenty of opportunities to hunt for shines and some other Pokemon not previously seen in the wild:

Spooky Woods was heavily populated by Ghost & Dark types, making it a popular grind spot for shiny hunters. Shuppet, Drifblim, Misdreavus, Duskull, Poochenya, and Sableye were frequent, while Houndoom, Grimer, and Murkrow seemed a bit less common. Absol was everywhere!!! That was a wonderful chance to get level 1s, shinies, or just farm candy.

Winter Forest had an interesting mix of Ice-types (like Lapras, Swinub, and Snorunt) and creatures who would appear in the woods (Stantler, Teddiursa, Pineco). The Alolan version of Sandshrew & Vulpix spawned regularly, and the out of place spawn was the always desired Ralts! 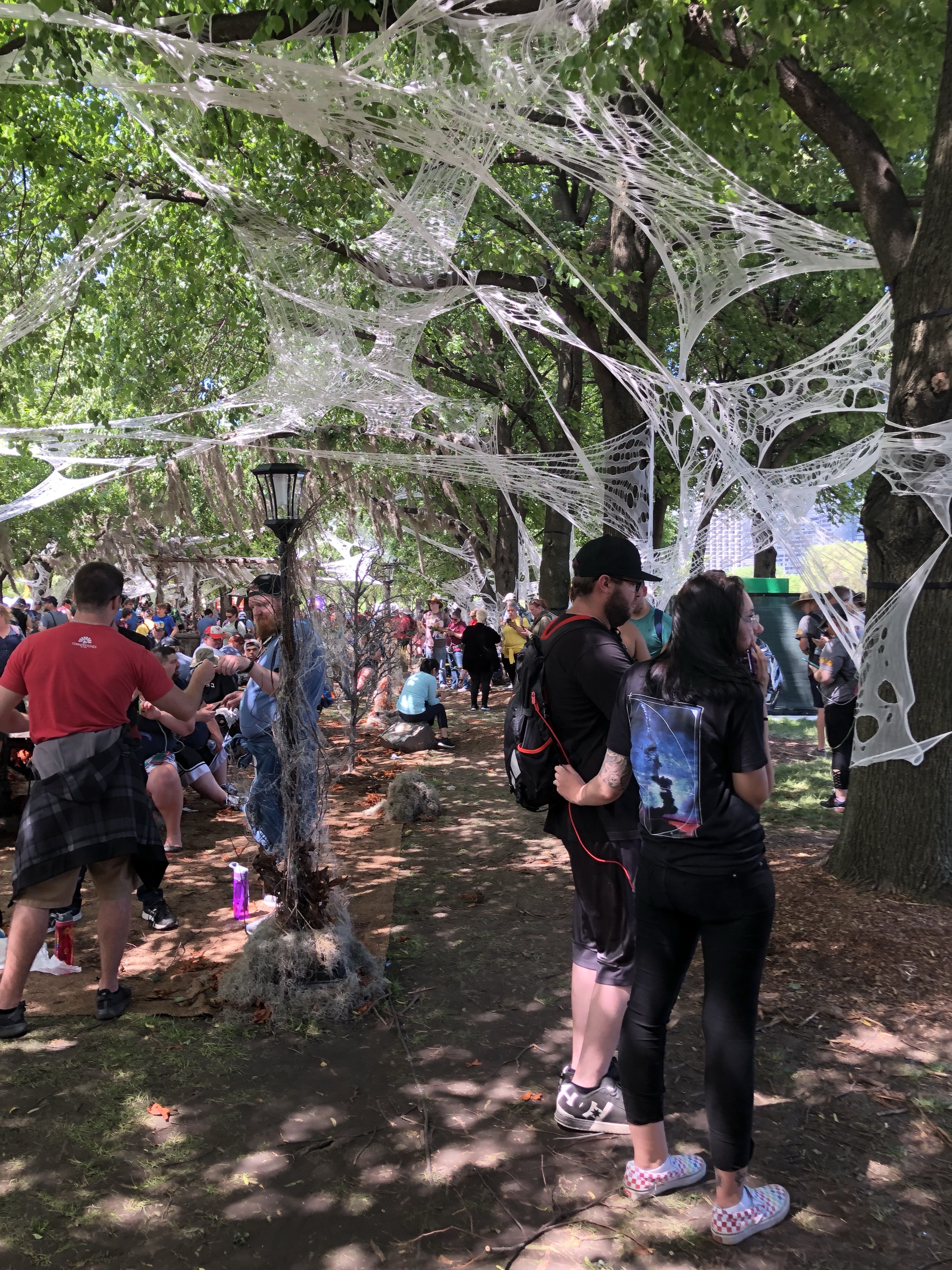 Buckingham Fountain didn’t have much Niantic built scenery, but the fountain with the city in the background made for one of the best photo spots in the park. The fountain would occasionally shoot water high in the air, and the wind led to some surprised, drenched trainers. Whether this was welcomed or not dependent on the day/time/weather. Water spawns dominated here, with Gastly being the primarily “out of biome” spawn. Dratini, Magikarp, and especially Krabby were among the shinies being targeted.

Fairy Garden offered some very intriguing targets. Mawile spawned here, and like Absol it was targeted by level 1 or shiny hunters. Togetic was also a popular target. Being a garden, Grass-types like Sunkern & Roselia were present as well. 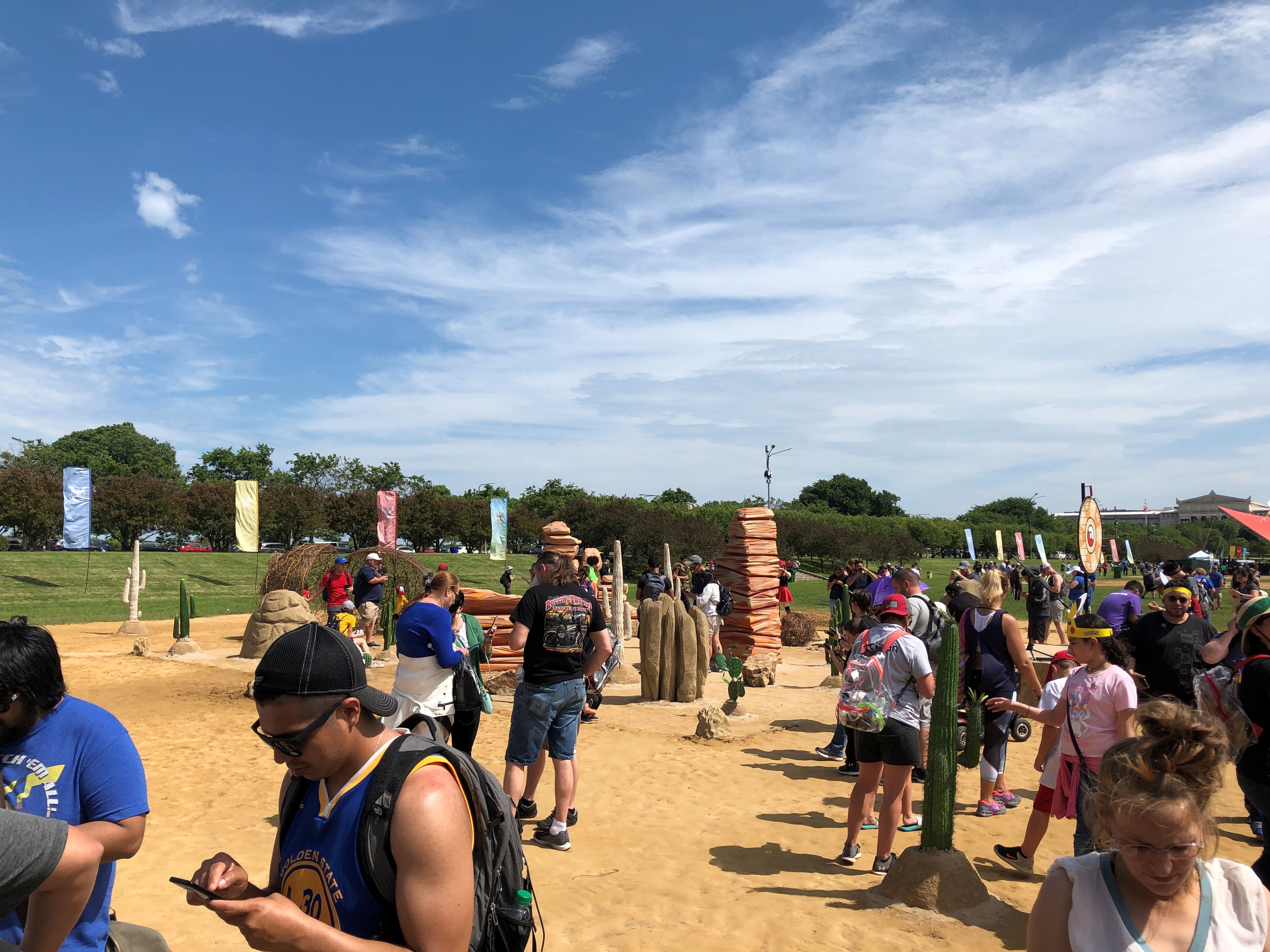 Sandy Desert was a good spot to hunt shiny Larvitar, Geodude, Shuckle, Cubone, and Bronzor. Horsea was the out of biome Pokemon but seemed to spawn rather infrequently. The mud caused me to spend less time in this biome than others, and apparently, this was a problem on other days as well

The trading post area was loaded with stops and featured Abra, Machop, and Geodude spawns. Unown (W A K E U P !) and Pachirisu were found throughout the park. On cross streets, it was possible to find flower Eevee and Pikachu variants spawning as well.

Catching Pokemon is nothing different than usual, and things like prizes and the team tents have been present since the first Go Fest. But there were some neat changes that made a fantastic event even better:

DJs were trying to coordinate trades in last year’s Go Fest, but having a designated area made it so much easier. Trainers were given signs to write out what they had and what they were looking for.

The additional 5 special trades was a nice touch. International trainers could send away more regionals while having more chances to get the ones they were looking for. PvPers hunted low-level Cresselia from new friends, and the 50% reduced Stardust cost made shiny trades a bit more palatable.

16-person single elimination tournaments were hosted almost constantly, with the price being the highly desired Go Fest Medal. While you can argue the merits of the format chosen, it was awesome to see Niantic give some focus to PvP. A full “battle arena” was even built for this, and was genuinely well done. 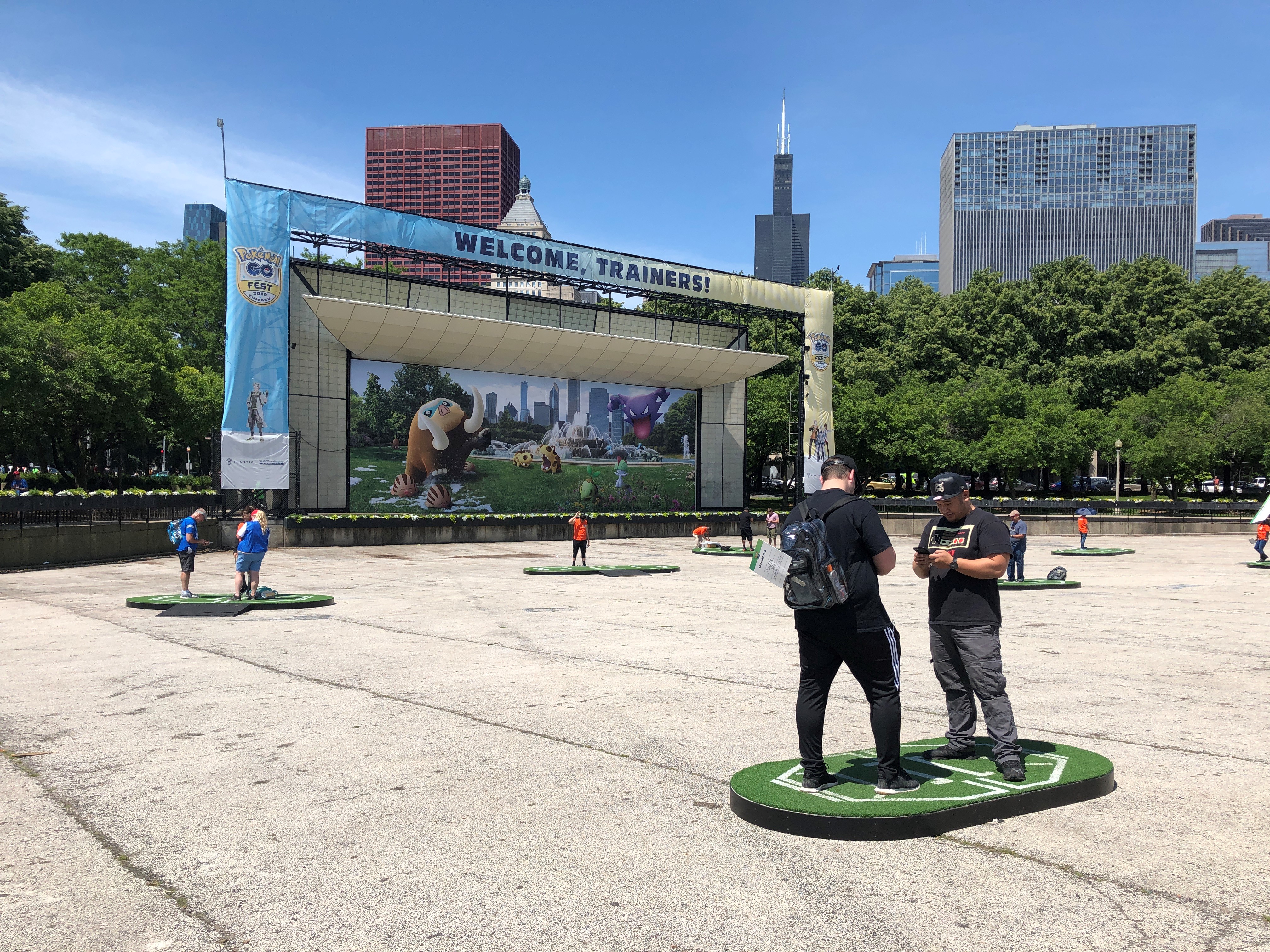 Last year everyone just looked at their phone and hunted shinies. This year, players needed to make new friends to complete quests. The trading post & PvP arena made for a great way to meet trainers from all over the world

There were pop up stores offering Niantic & Pokemon merchandise. Hopefully, they continue to grow this… even by Friday many of the options were sold out

Yes, Grant Park was the site of the first Go Fest, but more of the park was available. The park was large enough to fit everything/everyone while not being quite as exhausting to walk as Lincoln Park. There were dead zones last year, but this year it felt like there were always Pokemon to catch. 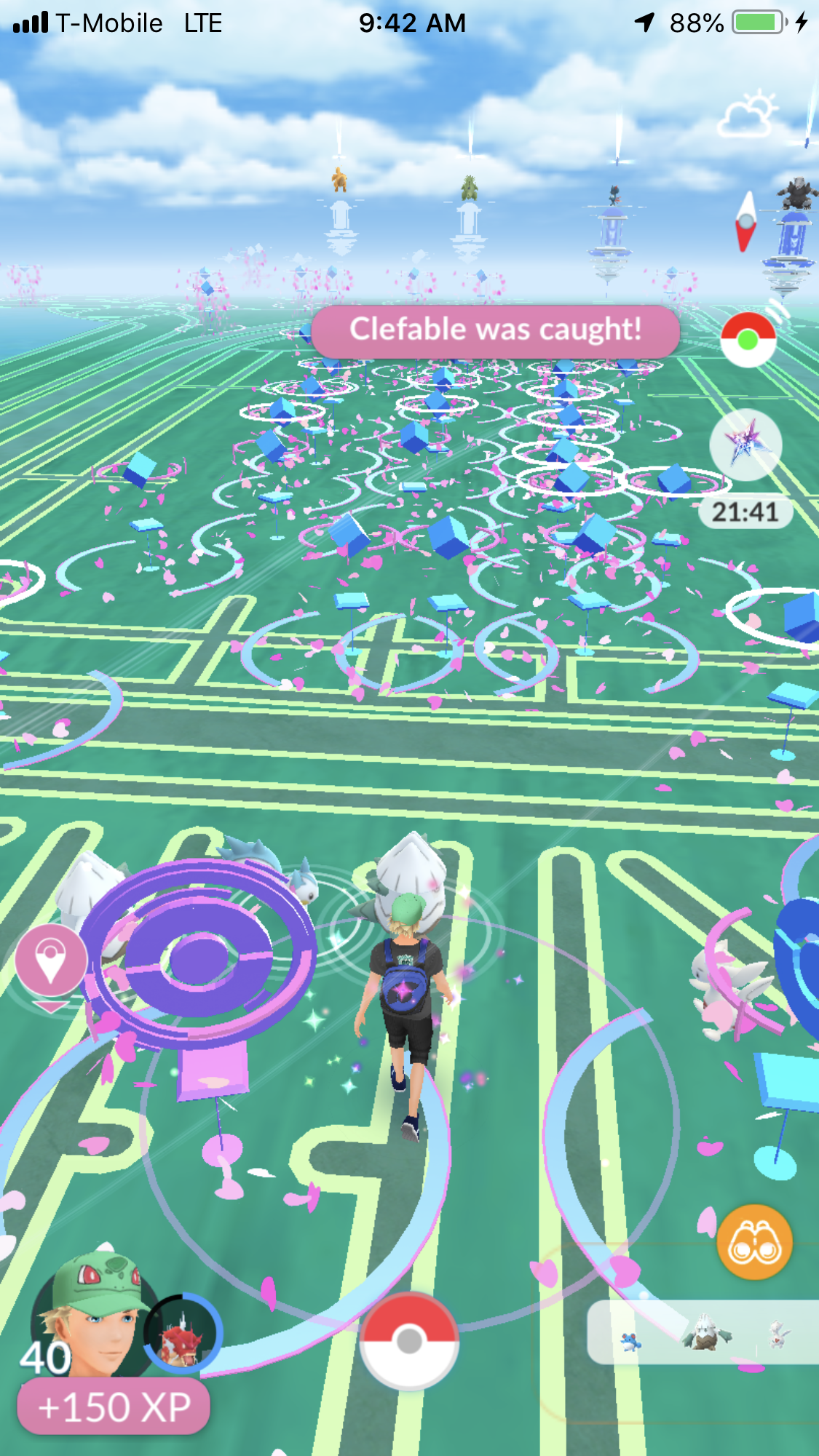 It’s not always the big stuff that makes the day great. There were a few subtle things Niantic did to really improve the user experience: 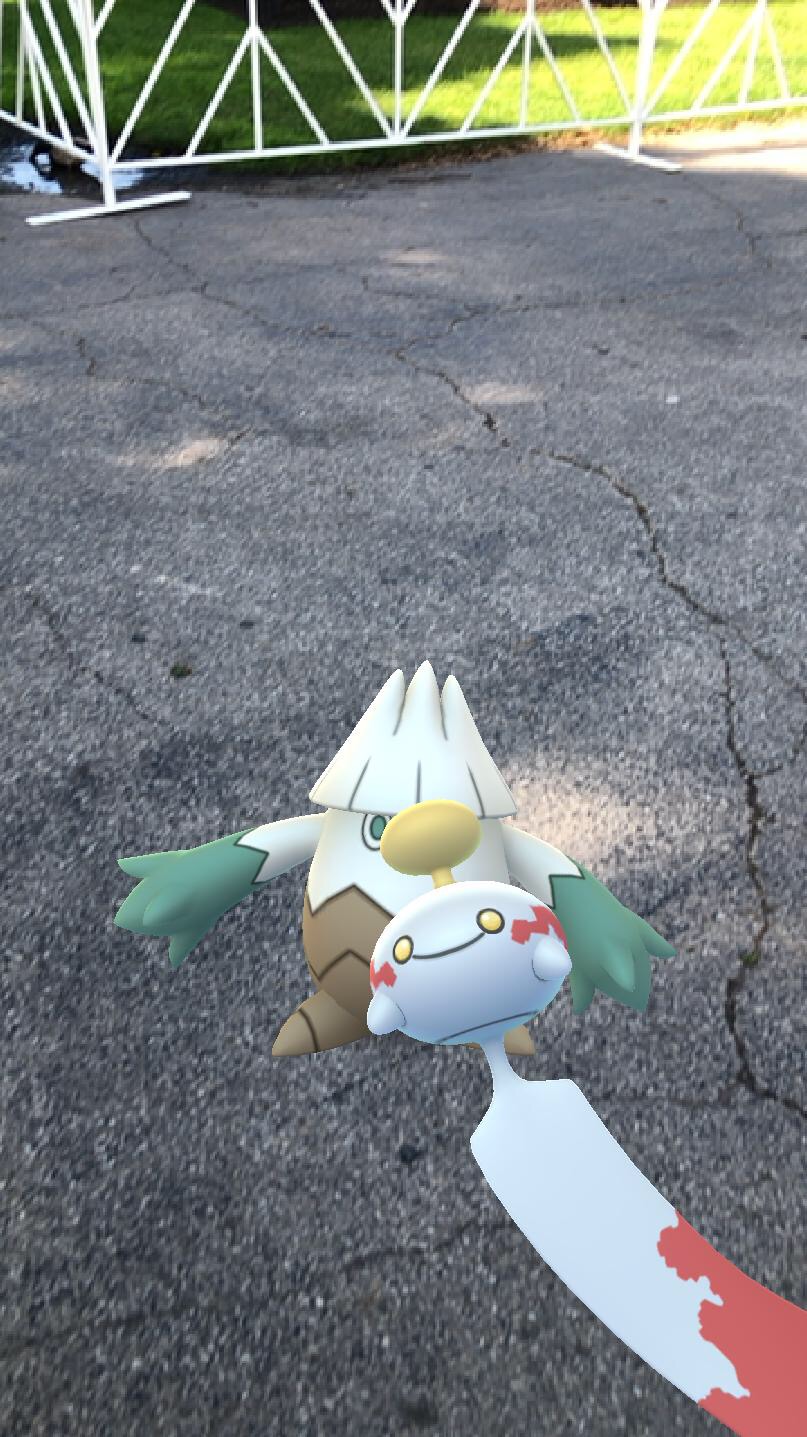 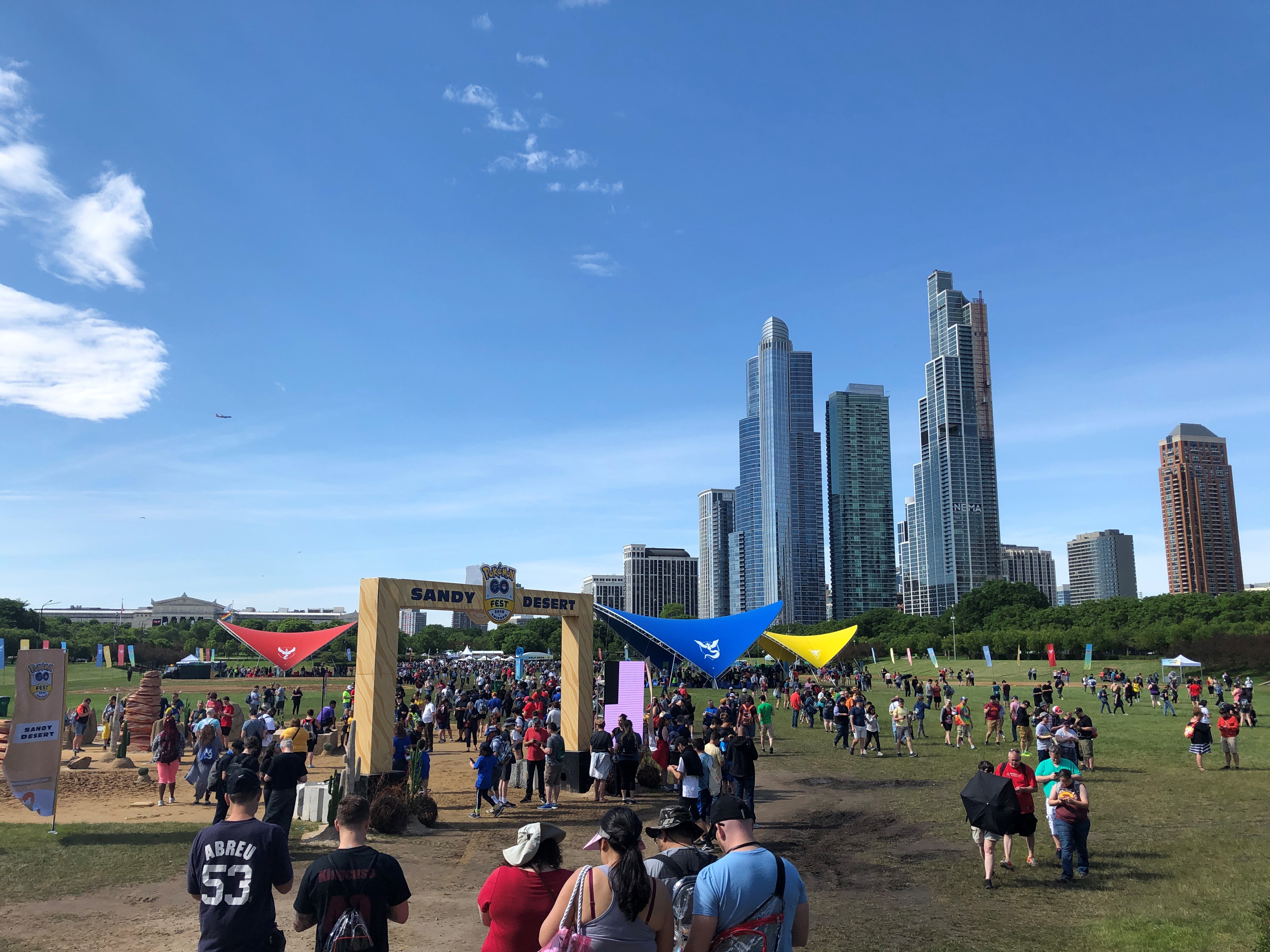 This event was fantastic, but time still has to spent covering some of the issues that came up during the long weekend:

Father’s Day weekend? Before schools are out in some parts of the US? Please pick another date next year :)

Photobombs initially were unlimited and gave trainers regular stardust. Some slick players were able to farm Chimecho, gaining 1500 dust for each catch with a Starpiece.

The cell coverage in Fairy Garden (at least on Friday) was horrid if not unplayable at times. Very disappointing for those (me) who wanted a shiny Mawile.

There was a global game outage in the early afternoon on Friday. There was no communication about this to the trainers.

Raids around Go Fest were absurdly sparse, at least on Thursday & Friday. This was likely intentional but disappointing for those without tickets on that day.

The city of Chicago shut down the event for a few hours on Saturday due to incoming thunderstorms. Niantic should not be blamed for this. Some trainers got an in-game announcement and the twitter accounts updated players, which is far better communication that we had in year one. In addition, trainers with Saturday tickets will be able to have Go Fest spawns from 9 am to 7 pm local time on June 22nd. Niantic should be praised for their handling of a difficult situation. 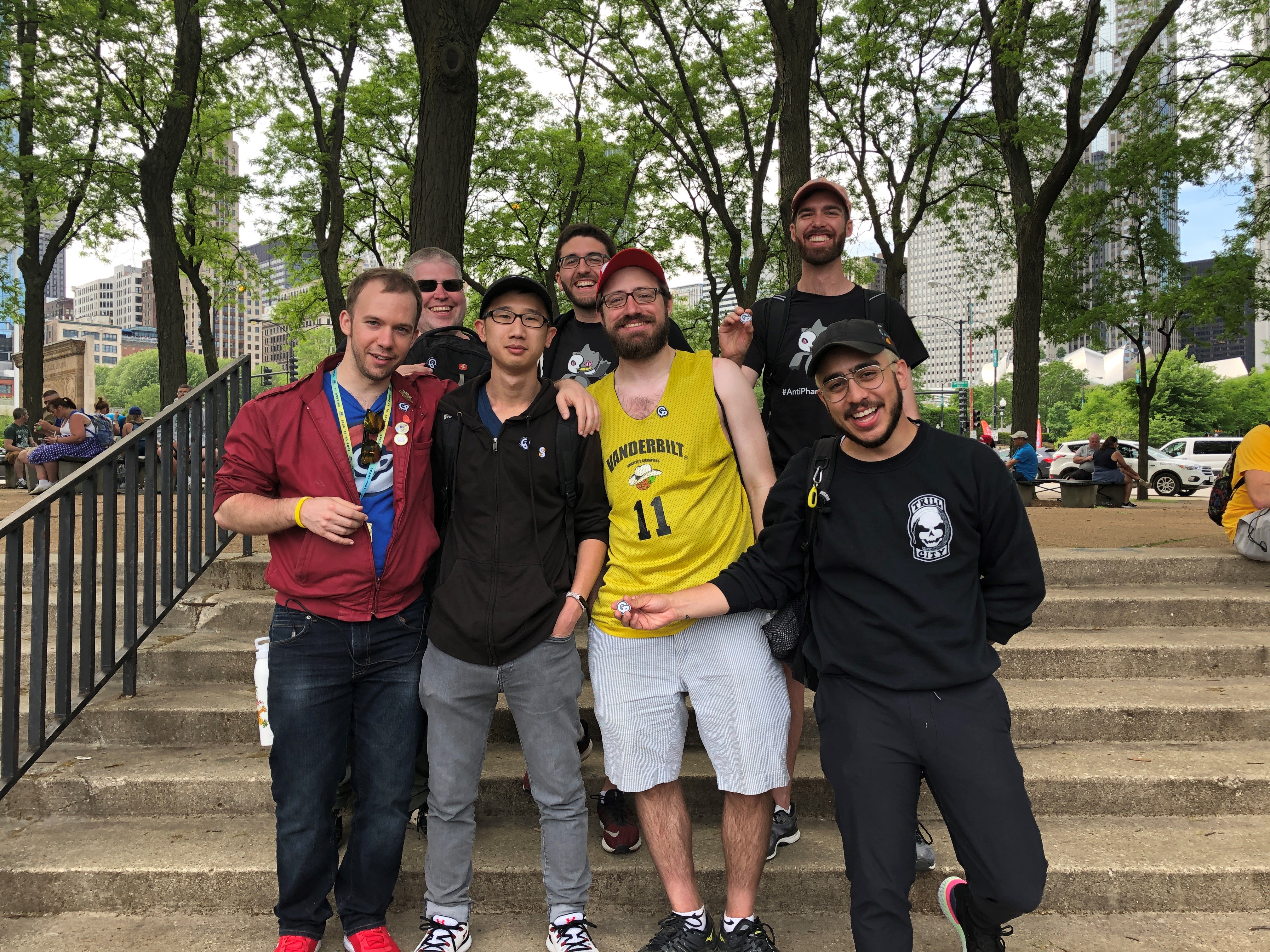 Between you and me, Go Fest is absolutely wonderful. Don’t tell anyone because I still want to be able to buy tickets next year. But this event is special and is something you should do everything you can to attend. The event itself was spectacular this year, but the experience goes far beyond that. Chicago is a wonderful city and has some perfect locations for Pokemon Go. Outside of the fest itself, you could find PvP tournaments, Youtuber meetups, Pogoraids dinner, or a myriad of other activities. As I said last year, I’d go back even without a ticket!