Going Past 40: An Analysis of Increasing the Maximum Level in Pokemon GO 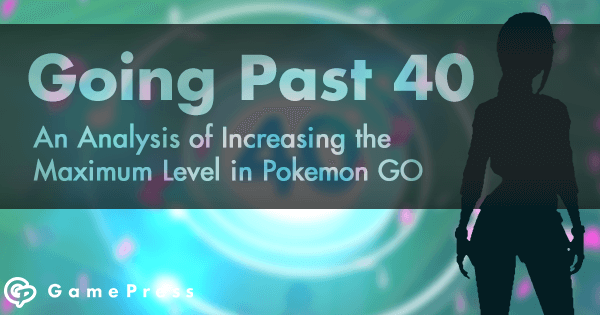 When Pokemon Go first started, one of the single largest goals in the game was to climb the ladder of trainer levels. Unlocking new items and features and raising the level of our Pokemon even higher was a daunting yet exciting goal, and one second only to the paramount “Gotta catch ‘em all” that is the series’ tagline. Today, reaching that goal is easier than ever, with new players reaching the summit of Lv.40 every day. Between events, activities such as friendship level bonuses, and the ubiquitous Lucky Egg in every shop package, Lv.40 is becoming somewhat common-place and is now considered more a standard for play than the top of the mountain. All of this is leaving people asking: “When will we see a level cap increase?”. In this article, we’re going to take a look at what such an increase could look like if Niantic ever chooses to raise the cap. We will first set the methodology that we will follow, look at what an increase in the cap would actually entail, try to figure out how these changes would affect the game as we know it, and then talk about some other methodologies that may be possible.

Unless otherwise stated, this article will look at existing arcs for every factor that connects to leveling up and continue the end product of that arc. Assuming this is ever actually implemented, our numbers may be slightly off due to the fact that we have taken the liberty of  doing some rounding.

When looking at a Pokemon’s page, have you ever noticed that its base stats are higher than what a perfect version of the same Pokemon would be at lv40? Or have you ever heard someone call a Pokemon with less than perfect stats “effectively perfect”? Both of these are because of the way that a Pokemon’s stats are actually calculated. We go into this concept in greater detail in our Pokemon Stats - Advanced article, but the abridged version is this: base stats are calculated based on the stats that a Pokemon had in the main series, but when put into practice, they are all cut to roughly 79% of what’s stated at the current max of Lv.40, always rounded down. To demonstrate this concept, here’s a look at the base stats for Dragonite Vs. what it actually has at lv.40:

And that is the crux of this article: Niantic has left a fairly large gap between what a Pokemon is, and what a Pokemon could be, so we’re going to guess where the next few levels could take us based on where we are now.

From LV.1 to Lv.40, a Pokemon currently grows from 9.4% of its base stats to the aforementioned 79.03%. The growth slows down quite a bit between Lv.30 and Lv.40, and that’s the line that we’ll be using to chart out our future. Using these increases, we can estimate that stat calculations could go from the current 0.7903 to about 0.8493 after a bit of rounding, or 84.93%. This translates into an increase of nearly 6% of a Pokemon’s base stats. When compared to where we stand now, that’s about a 10.75% increase. While that may not sound like a lot, let’s take a look at just how much of an effect it would have on the three Pokemon with the highest single stats in the game:

Not a huge change, but a fairly striking one nonetheless. Two main factors should really stand out in these charts: the first is that the highest stats see the most increase, such as Blissey’s whopping gain of 31 HP. On the other side of the coin, the lowest stats see the smallest increases, as evidenced by Shuckle gaining a measly 2 attack. As should be obvious by now, that’s because these stats are increased by a percentage, meaning Pokemon who have more stats will see a larger increase.

As any high-leveled player will tell you; levels are expensive. Not only do you have to gain a hefty chunk of experience to reach them, making full use of them entails a heavy Candy and Stardust cost. As an example, let’s chart out the cost for Stardust and Candy assuming that the formula set at later levels remains the same.

Rounding up, the increase in cost from Lv.40 to Lv.50 is 93% in Stardust and a whopping 258% in Candy. Assuming the cost follows the same charted line (which it likely wouldn’t), the cost of reaching Lv.50 would be astronomical for a projected stat increase that would round to about a 10.75% increase over what we have now, as previously stated. In short, the costs would vastly outweigh the benefits for all but the most dedicated players.

Despite the sharp jump in cost for leveling Pokemon, the experience cost to level a player makes for an even sharper line:

Well known among players is the 9% nerf that Niantic slaps on Pokemon with a CP over 4,000 in order to preserve some balance. This is a bit painful for any powerful Pokemon (ESPECIALLY those who would struggle to make an impact even without it such as Ho-Oh), but it does help avoid centralizing the game around a handful of Pokemon by not giving us something absurdly over-powered. In a similar fashion, a further increase in CP calculations will cause Pokemon who already have high stats to pull ahead even more. Remember the increase in Blissey’s HP vs. Shuckle’s Attack that we looked at earlier? This type of metric will apply to all Pokemon, meaning the legendary Pokemon that need it the least will tend to gain the most stats from the increase, causing them to pull ahead even farther. This also begs the question: if a Pokemon is near 4,000 CP before the cap increase and passes it after, would they automatically suffer the 9% nerf, or would we still hold Lv.40 as the standard?

Now that we have a decent idea of what this increase would entail, let’s put it into action. In order to do this, we’re going to look at how it would likely affect the two branches of Pokemon Go’s competitive gameplay: The PVE (Player Vs. Enemy) Meta and the PVP (Player Vs. Player) Meta

Effects on the PVE Meta

Raids would become even more centralized around high-stat Pokemon as they pull ahead of their contemporaries more and more with each passing level. Will it be a huge change? Assuming our model, probably not. However, it will make a few Pokemon drop off of those raid graphs that we get every month or two, making the system more stagnant. And speaking of raids, they will likely need to become more difficult in order to compensate for the increase in potential power as we saw after the change to Super Effective damage. This is an outright problem as it gears the raid meta even more towards veteran players who will be able to raise Lv.40-Lv.50 Pokemon, while leaving more casual players in the dust.

The change would also make gyms generally even easier than they are now, with attackers having higher power and defenders being expected to hit higher levels to compete, which will also cause faster CP decay. Short of a large change to the system, this would be the cause of nothing but more stagnating and an even weaker defense meta.

Effects on the PVP Meta

The effects on the Great League would be largely positive. Several Pokemon with a CP cap that ends below the 1500 cutoff would see a potential, though likely expensive, buff. This would allow them to be more effective and potentially useful in the tier. However, this can also be a bit of a double-edged sword. For an example of why, let’s look at Medicham. Overall, it’s generally considered the single best Pokemon in the Great League with a max CP of 1431, meaning it could creep even higher than it is now and become an even more centralizing force as it becomes more difficult to counter.

Most of the Ultra League’s dominant forces have CPs that can rise above 2500, meaning a level cap increase would not have as much of an effect on centralizing Pokemon as we may see in the Great League. Here, the increase would be almost entirely positive, as Pokemon not currently viable would see buffs that would allow them to compete in the tier. This may cause a slight meta-shift, but it’s unlikely that a new centralizing force would hit the scene due to a higher CP.

In the Master League, a level cap increase would cause the aforementioned power creep issue in spades: with no caps in place, Pokemon with high base stats will gain the most power, giving them a greater edge. This would be detrimental to the league, as it would cause further centralization and an even stronger emphasis on Legendary, Pseudo-Legendary, and Mythic Pokemon due to their naturally high stats.

Note that all of these assumptions are assuming that the PVE/PVP metas don’t change in order to adapt to the increase in power. Given Niantic’s track record, it is likely that they would not stay the same if this were to happen.

As alluded to many times in this article and even stated up-front in the initial section, these calculations are just one potential outcome among many. We’re only charting where we’d go if everything keeps going on its current trend, but this is one of many, many different potential outcomes, and one that’s a bit too unbalanced to be likely at that. We could see another drop in power-gain like we have in raising Pokemon above Lv.30, we could see an entirely new system of leveling, and we could also see a higher trainer-cap level without an increase in Pokemon level, instead representing a sort of “prestige” system with various bonuses aside from leveling up Pokemon, just to name a few possibilities. Frankly, the options for this are endless, and our goal here has simply been to theorycraft one of those potential possibilities using the room to grow that is already built into the game.

After all of this, you may be asking yourself: “If our Pokemon are only 79% of what they could be now, and this article talks about what they would be at 85%, what would it look like to have a Pokemon at 100% of its stat potential?”

So where can we go from here? The sky’s the limit. Should we reach for the stars? For the sake of balance, probably not. However, for those players who have gone beyond the experience needed to reach the current cap, some multiple times, the hope of even higher goals for the future may not be totally unfounded. As demonstrated, we have room to grow beyond Lv.40, so now it may just be a matter of waiting for Niantic to open the gates to an even higher mountain for us to climb.

Moltres: What do I do?
Got a 98% shiny at L31. It’s current set is Fire Spin + Overheat, and it’s on my…
Probailities in legendary raids (are my acc's unbelievably lucky or am i just to dumb to calculate)
So apparently a shundo from a legendary raid is 1/4320 and a normal hundo 1/216 I…
Fun ways to mix up great league team?
Heya, looking for some advice! I’ve pretty much been running the same great league…
Welp, Tri Attack stats are out
image926×768 239 KB This is depressing. 16 posts - 11 participants …
Charged move on switch
Ok, this has happened to me often lately. My opponent charges up a charged move and…
Read More