From April 12th to April 26th, Season 7 of Pokémon GO Battle League is going to add some spice to the regular Great League rotation. Alongside the open format, trainers will have the chance to compete in the Great League Remix where the 10 most used pokémon are banned!

A few days ago, Niantic published the ban list: Azumarill, Galvantula, Raichu (both forms), Marowak (both forms), Skarmory, Stunfisk (both forms), Swampert, Talonflame, Umbreon and Venusaur. The absence of some of these pokémon will definitely reshape the metagame, making for a bit of a different experience from standard Great League.

In this article we’re going to take a look at how exactly these differences are going to play out and which picks are looking to rise to the top. And if you don’t feel like reading, here’s a video by fellow GamePress writer RyanSwag which goes over most of the same points! 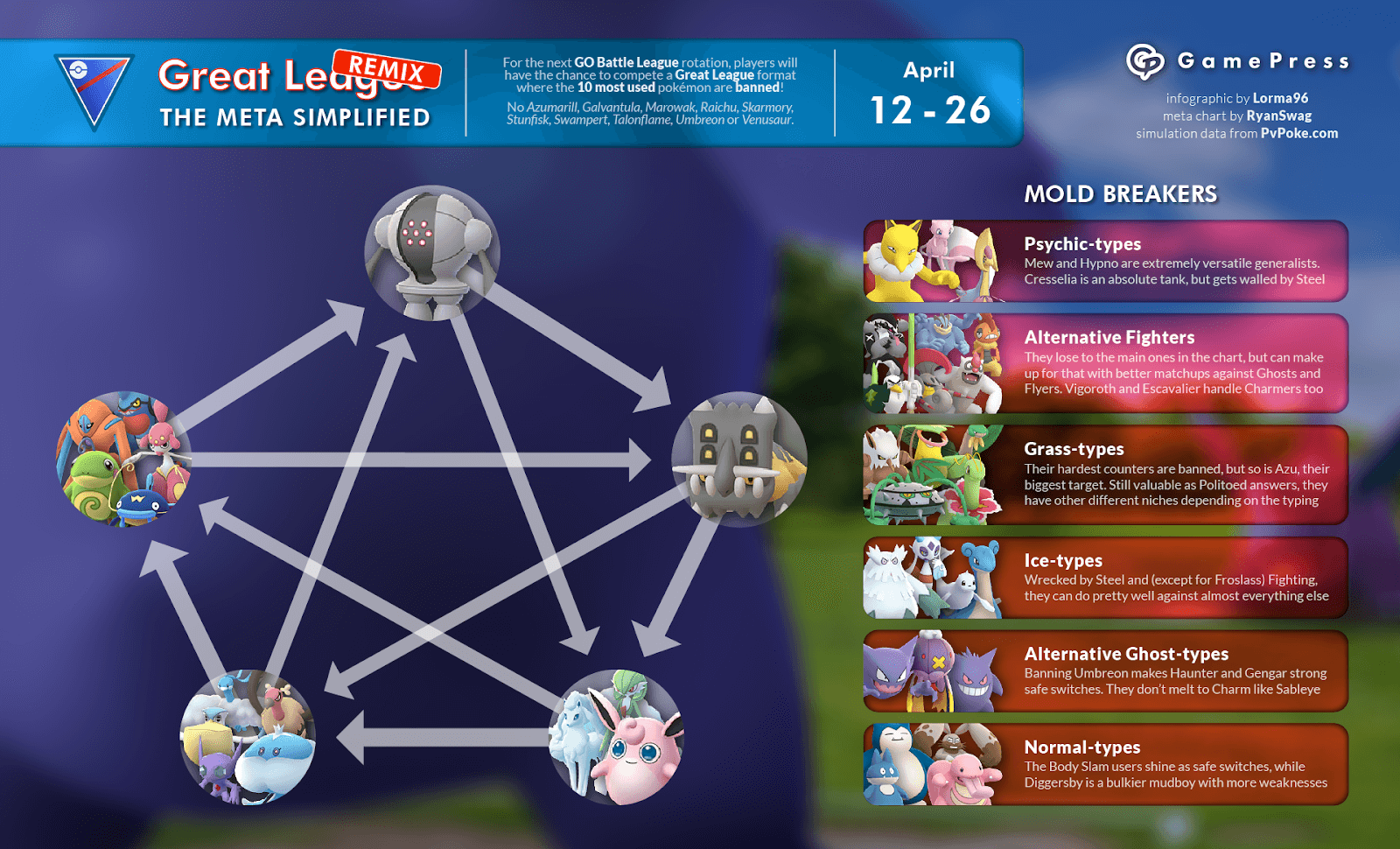 Ironically, even this remixed Great League still looks to be dominated by Steel- and Fairy-types. At least it’s not Galarian Stunfisk and Azumarill this time around…

Guess who’s back? Registeel (Lock On + Flash Cannon & Focus Blast) really benefits from the Remix bans, which include 5 of its most common counters — including the hardest ones, Alolan Marowak and Talonflame — as well as its biggest competitor which pushed it out of the top 10 in the first place, Galarian Stunfisk. Not sure if you missed good old Registeel from the Season 2 days, but be prepared to face a lot of it once again.

The other main Steel-type available is the classic Bastiodon (Smack Down + Stone Edge & Flamethrower). It loses hard to Focus Blast, but it does outperform Registeel in other matchups, most notably against Ghost-types like Sableye, Jellicent and Haunter, and some Flyers like Pelipper, Altaria and Mandibuzz. Melmetal (Thunder Shock + Rock Slide & Superpower) is kind of a mix between Bastiodon and Registeel, not nearly as tanky as either of them, but capable of taking down both!

Thanks to the ban list, apart from the few Steel tanks above, there isn’t much here to put a hard stop to Fairies like Alolan Ninetales (Charm or Powder Snow + Weather Ball Ice & Psyshock) or Wigglytuff (Charm + Ice Beam & Play Rough). As usual, they can tear through anything that doesn’t resist their hard-hitting fast moves, as long as they have shields to hide behind. That makes having a Steel tank in your team almost mandatory!

Having counters to Steel will be as important as always in the Remix meta: let’s look at the ones that are left, divided into two main groups, Ground/Water and Fighting.

Politoed (Mud Shot + Weather Ball Water & Blizzard or Earthquake) will almost certainly be one of the most popular picks in the format. Compared to regular Great League, the absence of Azumarill makes the non-legacy Blizzard moveset more viable, which is good news for anyone not willing to spend an Elite TM on Earthquake! Spamming Weather Ball is generally enough to secure the Registeel matchup anyway. The true OG mudboy Whiscash (Mud Shot + Mud Bomb & Blizzard) mainly stands out for the better matchup against Deoxys-Defense, and likely won’t see as much play as Politoed.

The Rest of the Meta

Jellicent (Hex or Bubble + Shadow Ball & Ice Beam or Bubble Beam) is actually the hardest Registeel counter available, and in other matchups it can take advantage of its unpredictable moveset. All options have their merits here: it needs Bubble (and possibly Bubble Beam) to take down Bastiodon, while with Hex it’s a harder answer to Psychics and Politoed, and Ice Beam can come in handy as a surprise nuke against Altaria and Grass-types. Overall, Jellicent looks like a great core breaker in this remixed meta. Other Ghosts like Purified Sableye (Shadow Claw + Foul Play & Return), Haunter and Gengar (Shadow Claw + Shadow Punch & Shadow Ball or Sludge Bomb) can also give Registeel and Fighters a hard time, functioning especially well as aggressive safe switches.

With the bans to Azumarill and Galarian Stunfisk, many probably would not have expected Altaria (Dragon Breath + Sky Attack & Dragon Pulse) to be mentioned this low in the article. In reality it still has a lot to worry about, with Bastiodon and Charm users around, though at least Registeel doesn’t give it that much trouble. Speaking of Flying-types, Pelipper (Wing Attack + Weather Ball Water & Hurricane) has slowly carved its spot in the Great League meta and it still manages to stand out here, thanks to the key resistances to Registeel and Politoed. Mandibuzz (Snarl + Foul Play & Aerial Ace) uniquely shuts down Deoxys-Defense, but it can struggle quite a bit more against other Counter users.

The last section goes to Psychic-types. Hypno (Confusion + Fire Punch or Focus Blast & Thunder Punch or Shadow Ball) and Mew (Shadow Claw + some combination of Surf, Wild Charge, Flame Charge, Grass Knot, Rock Slide, Psyshock) hold the title of most versatile generalists in the meta, only consistently hard countered by the occasional Dark-type (remember, Umbreon is banned) and being able to threaten almost anything else depending on their moveset of choice. Cresselia (Psycho Cut + Grass Knot & Moonblast) is more predictable and gets completely walled by Steel, but it’s still extremely powerful in other neutral matchups.

Let’s take a look at a few different team compositions that could perform well in the Great League Remix. Remember that these are only basic examples — you can modify them however you prefer, or even try to counter them with your own anti-meta builds.

Double Steel was already a quite popular ABB line in open Great League, and this modified variant could work just as well. Venusaur would be the usual lead, but since it’s banned a bunch of things can work in its place, like Medicham, Jellicent or Pelipper. Registeel obviously functions as the safe switch instead of Galarian Stunfisk, baiting out the opposing Steel counter to let Bastiodon roam free in the endgame.

An extremely cheap, but still quite boring team which already plagued open Great League and only looks better here. Of course, pretty much any other Charm user would work instead of the two above. Scrafty or even Registeel can also replace Obstagoon if you want.

Now that we got the ABB builds out of the way, let’s take a look at more balanced ones. This is an extremely bulky lineup, based on the almost perfectly synergistic core formed by Altaria and Registeel. Many pokémon can fill the safe switch slot here, so feel free to put whatever you want as long as it’s not too weak to Bastiodon and Fairy-types.

With Fire Punch and Thunder Punch, a Hypno lead would mainly have to switch out against Bastiodon, which both of the pokémon in the back cover very well. Unless a Jellicent comes out to punish it, Politoed with Blizzard can put up good fights to regain switch advantage. Toxicroak is pretty much interchangeable with most other Counter users.

Somewhat of a spicier team, where either Sableye or Pelipper can function as safe switches depending on the situation, and both cover for Ferrothorn’s main weaknesses to Fighting-types and Registeel. Jellicent can also fill the same role if you want to go for a double Ghost or double Water lineup.