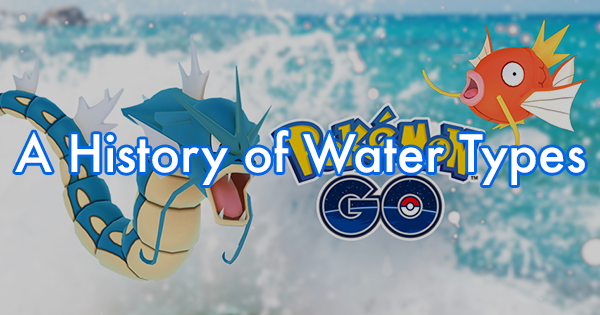 Water type Pokemon have had one of the most relevant types since the beginning of the game. They have found uses countering Fire, Rock, and Ground, and have been extremely relevant as all-rounders for both defense and offense. With the introduction of Kyogre, the strongest Water Pokemon yet, it’s good to take a look back at the history of Water types, and to see how they will turn out in the future.

The Long Reign of Vaporeon

Vaporeon has been one of the most-used Pokemon in Pokemon GO since the start of the game. With the commonly seen Eevee and low evolution cost of 25 candies, trainers could get the best Water type and one of the best attackers and defenders in the game.

Vaporeon began as one of the most broken Pokemon. When the game first launched, Water Gun was extremely strong, and charge moves were plain bad. As a result, Vaporeon had great DPS on top of excellent bulk, and all players had to do was spam Water Gun. The only Pokemon stronger than Vaporeon were Pokemon like Dragonite that could take months to obtain. Not only was Vaporeon a must-have attacker, for some players, they were the only attackers. And with its high CP, Vaporeon was topping gyms only a few days after the game was released.

Part of what made Vaporeon so powerful was a lack of viable counters. Electric and Grass-types were both quite weak at the beginning of the game. Despite the type advantage, Jolteon would lose to Vaporeon in a 1-on-1 fight. Grass-types fared better, but because of how easy it was to obtain, the most popular counter to Vaporeon was another Vaporeon.

Water Gun was nerfed at the end of summer 2016. It was no longer unreasonably strong, but remained a very good move until Gen 2. In November 2016, Electric types such as Jolteon were given large stat buffs with the CP rebalance, weakening Water's viability as defenders. Vaporeon itself was also buffed, however, and gained a max CP over 3000. As the minimum viable CP for gym defenders crept higher and higher, Vaporeon maintained a place in the meta both as a defender and as an attacker into Rhydon, another high-CP defender.

Even in the Gen 2 era when Water Gun’s EPS was further nerfed, Vaporeon stayed solid as a beefy, high CP defender. With the introduction of raid battles, Vaporeon became a counter to Arcanine, Tyranitar, and legendaries such as Moltres and Entei.

The King is Dead - Long Live the King

Vaporeon enjoyed a very long reign. However, there was one Water type that always had the potential to be stronger, held back by a poor moveset. With the introduction of a few new moves that came with Gen 3, this Pokemon leapt to the top of the ranks and dethroned Vaporeon forever. This Pokemon was Gyarados.

Gyarados has slightly lower bulk than Vaporeon but a much higher Attack stat. Before December 8th, 2017, Gyarados could not learn a Water-type fast move. The introduction of Waterfall allowed Gyarados to learn a double-Water moveset.

With the incredible power of Waterfall and Hydro Pump, Gyarados’s viability skyrocketed. It immediately overtook Vaporeon as a counter to Fire and Ground types. It became a generalist gym attacker and raider with some of the best DPS in the game. Gyarados’s Flying subtyping made it a perfect counter to Fire or Ground types with Solar Beam like Ninetales and the recent legendary raid bosses Ho-Oh and Groudon. Gyarados was relevant immediately.

Gyarados is strong enough to make the impossible possible. Only three Gyarados as low as level 34 can solo a Ninetales raid boss, which was previously almost impossible even with level 40 Golem or Mewtwo. Gyarados became very useful for challenges such as three-manning Groudon or two-manning Nidoking, Nidoqueen or Golem bosses. After spending so much time as a B-tier attacker at best, it finally got its chance to shine.

Many trainers powered up teams of Gyarados to counter Ho-Oh and Groudon. Unfortunately, Gyarados’s time in the sun (rain?) has been short-lived. A new legendary raid boss has blown Gyarados and every other Water type completely out of the water: the god of the ocean, Kyogre.

Kyogre is strong enough to outclass a level 40 Gyarados at only level 27.5. A level 25 Kyogre easily beats a Vaporeon. Even without powering their Kyogre up, many trainers will find their Kyogre becoming one of their best Water types. There is no need to worry about Rare Candy costs when only a few power-ups gets you the best Water attacker in the game.

While Gyarados is strong enough to be able to three-man an Entei raid boss, maxed Kyogre can two-man one. Kyogre has better overall damage output than Golem even against Moltres and Ho-Oh, despite Golem having an extra type advantage. In fact, Kyogre doesn’t even need to use a charge move to be able to successfully solo Ninetales. Kyogre with its worst moveset outperforms Vaporeon with its best.

Kyogre is a sound investment for any trainer at any level. While previous legendaries have outclassed other Pokemon of their types, none has done it as well as Kyogre has. With only about a hundred rare candies spent on a team of Kyogre, trainers can ensure that no non-legendary Water type will become a relevant attacker again.

A Look at the Future

Kyogre looks very solid now, but it won't always be without a rival. Palkia of Gen 4, a Water/Dragon type with a higher Attack stat (assuming the same 9% nerf), may be able to compete with Kyogre, depending on moveset.

Palkia’s Dragon typing removes Water’s weaknesses to Grass and Electric and adds an extra resistance to Fire. Palkia has less bulk than Kyogre but higher Attack. With its extra resistance, its effective bulk is higher and it would certainly become the best counter to Fire types. However, Palkia cannot learn any of the currently-implemented Water fast moves. Niantic would have to implement Dive, Liquidation, or Whirlpool as a fast move in order for Palkia to get a double-Water moveset. Were this to happen, it has every potential to oust Kyogre as the best Water attacker, at least against certain opponents such as Fire types and those with Grass or Electric moves.

Even considering the threat of Palkia, Kyogre still has at least a year to be unchallenged as the strongest Water type. Besides Palkia, no other Water type will even come close to challenging Kyogre's raw power. With Regirock expected as an upcoming raid boss this year, trainers should not fear to invest in Kyogre now. Water types have proven themselves to be strong and relevant to the meta, and there is no reason to expect that to ever change. Palkia or no, Kyogre will be relevant for many years to come.