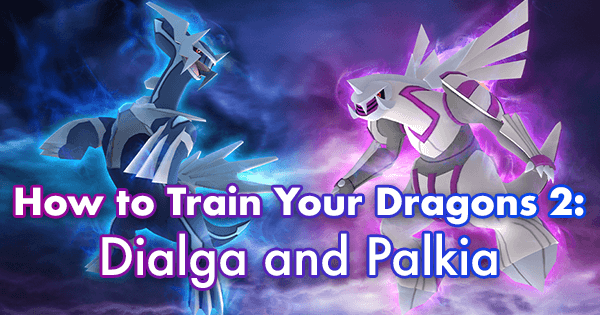 Our first iteration of How to Train Your Dragon, written nearly a year ago, discussed the Gen 3 Dragon-types and their functional differences compared to Dragonite. With Palkia recently leaving Tier 5 raids and Dialga taking its place, players are once again left wondering: with so many great Dragons, which ones are the best? As nearly 1/4th of all legendary Pokemon are Dragon-type, this is an important question for those wanting to make their investments count.

The Temporal Pokemon is a bit unlike the others. Dialga is one of two Dragon Pokemon who are not also weak to Dragon (the other being Mega Altaria). Coupled with elite stats and great moves, these traits warrant thinking about investment in Dialga. For example, it’s the only notable Dragon at present who survives a Draco Meteor from Palkia with HP to spare. This renders it a top counter to Dragon Pokemon using Dragon-type moves.

That said, Dialga suffers from a notable flaw: it has the lowest DPS among the top Dragons. This can mostly be attributed to its lack of Dragon Tail. Rayquaza has about 10% higher DPS, with other options such as Dragonite and Salamence falling in between. For ambitious raiders in small raid groups, Dialga may be a liability in matchups where it has no defensive advantage.

Dialga is worth investing in for casual and hardcore raiders alike. Casual raiders will welcome its bulk at the cost of a little DPS, while hardcore raiders may need to rely on its good Dragon matchup in some circumstances.

Unlike Dialga, Palkia possesses Dragon Tail in addition to a slightly higher Atk stat. At the time of writing it ranks #2 in Dragon DPS, and in some instances it even bests Rayquaza. Usually, this involves Palkia’s different resistance profile: it has exceptional longevity vs. Pokemon using Fire and Water-type moves.

For every instance where Palkia might have the edge on Rayquaza, there are likely more where Draco Meteor drags it down. Palkia is at its best when it can use 2 or more Draco Meteor before fainting, but often it will faint after using 1 (or even worse, 0) with wasted energy.

Hardcore raiders may find value in Palkia’s high DPS and useful double resistances, but casual raiders will find it functionally similar to Dragonite, who is much cheaper to power up.

Garchomp: A Look Ahead

The Gible family is one of just a few non-legendary Sinnoh Pokemon that are not yet released in GO. Will there be value to Garchomp now that we already have access to Dialga and Palkia?

Absolutely. Garchomp’s projected stats are nearly a strict upgrade to Dragonite, trading a tiny bit of Atk and Def for a sizable gain in HP. Its projected moveset features the standard Dragon Tail and Outrage combo. Garchomp will actually feature the highest TDO among top Dragons in neutral matchups, edging out even Dialga.

While Dialga and Palkia are greatly outclassed as Steel and Water attackers, respectively, Garchomp will have secondary value as the top non-legendary Ground attacker. It uniquely has a triple resistance to Electric, surpassing even Groudon in TDO in those matchups.

While Garchomp has real advantages over its competitors, players ought not to dump Rare Candy at the earliest opportunity to get one.

By the end of Gen 3, the top Dragons all had in common a secondary Flying-type, and it’s no surprise that Rayquaza was the clear best. While its Atk stat remains peerless, Gen 4’s Dragons are bulkier and more diverse than what we had before. As such, Rayquaza is not always the best answer when going into battle- but it still usually is. It’s long overdue to make a second appearance in GO, and when it does, you don’t want to miss out.

A Brief Tangent on PvP

Analysis up to this point has focused solely on PvE, which pertains to more of the player base. For those invested in PvP, Giratina (Altered Forme) and Dialga are a pair of meta-defining Dragons in Master League, and the same Giratina dominates Ultra League as well. No Master League bench is complete without Giratina and Dialga.