When a Pokemon idles (i.e., does nothing) during a wild encounter, every 0.77 seconds it rolls an animation check that randomly determines its next action:

Additionally, using a berry has no effect on the animation. The above results are derived empirically from measured data, as such subject to change as more data comes in.

All Pokemon's idle animations are 1.54 second per loop, typically swaying from left to right and back again. This loops makes for a convenient method to time your throws safely.

Take this Ekans, for example. If you time your throw after Ekans's tail sways back from the furthest left or right, it is safe for the next 0.77 seconds. The Pokemon won't able to use an attack or jump animation during that time.

Video recordings of a variety of wild Pokemon encounters were collected and timestamped. The recordings are made in ten-minute chunks, with and without applying Razz Berries (it made no difference).

We were interested in the lengths of breaks taken by Pokemon between attack or jump animations (pause length), and whether this pause length distribution varied from Pokemon to Pokemon. By studying the video recordings taken, we were also able to confirm that all Pokemon have 2-second attack animation. Jump animation length varies but matches the "jump_time_s" variable found in game master data sheet, with several exceptions:

This graph shows what pause lengths were observed across all samples: 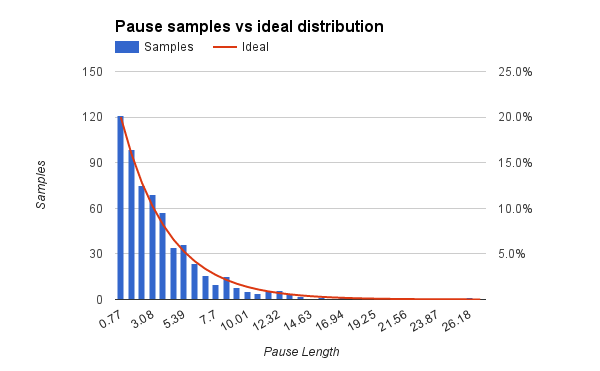 After collecting a large enough sample, it's immediately apparent from the above graph that pause length is a variable that follows the geometric distribution.

The red line charted with our samples is an ideal geometric distribution of p =0.2 at 0.77 second intervals. We checked that distribution against our sample with a chi-square test.  The chi-squared value is 7.92 with a p value of 0.63665, which is good evidence that we're on the right track.

A geometric distribution is the type of outcome from counting heads in a coin flip until you hit tails. For an unbiased coin, you'll count 1 head 50% of the time, 2 heads 25 % of the time, and so forth.  Instead of heads or tails, our sample outcomes are idle or not idle, weighted 80% towards idle.  As such, we see a distribution of 20% not idling after 0.77 second, 16% after 1.54 seconds, and so forth.

On average, each Pokemon does 10 to 12 actions a minute during a wild encounter.  We can calculate this average after knowing how pause lengths are distributed.

Because of the time consuming nature of recording and timestamping, our sample is not as large as we would like.

In our limited sample, we saw no particular bias towards jumping or attacking in general or for specific Pokemon in particular. It seems 50-50 whether the next animation would be attack or jump for every Pokemon.

Several Pokemon have alternative idle animations. They don't affect gameplay and occur about 5% of the time when idle.

You can also find these animations in Pokemon profile pages.  If we are missing any alternative idle animations, let us know below in the comments!