Lapras Raid Challenge Day: What to Know and Expect 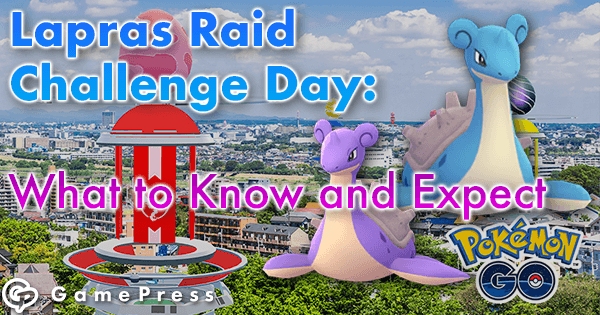 On May 25 (and May 26 for Asia-Pacific), Lapras will be taking over the raid scene in Pokemon Go. During this time trainers will have the opportunity to possibly capture a shiny Lapras from raids, and all Lapras caught will have the legacy moveset combination of Ice Shard + Ice Beam. While Lapras isn’t a top Pokemon in PvE anymore due to the introduction of Weavile, Glaceon, and Mamoswine, it’s still a fairly tanky Pokemon that can be considered for a secondary team or PvP. You might be wondering exactly how good Lapras with a double legacy moveset is, and this article will cover the details.

To read more about our moveset rankings, check out our Lapras page.

Lapras is a fan-favorite that features good bulk and decent DPS, though as more generations of Pokemon were added to Pokemon Go, Lapras has gradually become replaced with more powerful options. Regardless the Loch Ness Monster still brings back memories and nostalgia to those who maybe played the main series games or watched the anime on TV, and if you get a shiny variant then there might be an incentive to show it off at the cost of some DPS. Where Lapras does a bit better is in gym defense, as its good bulk and synergistic typing allow it to cover some of its weaknesses and endure attacks for a length of time. Unfortunately, due to how prevalent Machamp has been as a gym attacker, Lapras has a harder time being selected as a top tier gym defender, if gym meta still matters in your area. Perhaps the best way to use Lapras is to place it as the 6th Pokemon in the gym so it can sit nice and pretty shiny on top.

With a Water-Ice typing, Lapras is weak to 4 different types, all boosted in different, common weathers. Check your forecast to prepare the best team, and have options in case the weather switches throughout the event.

Assuming no boost, the top row of these pictured attackers are your best bets, with an emphasis on the Electric and Fighting-types. 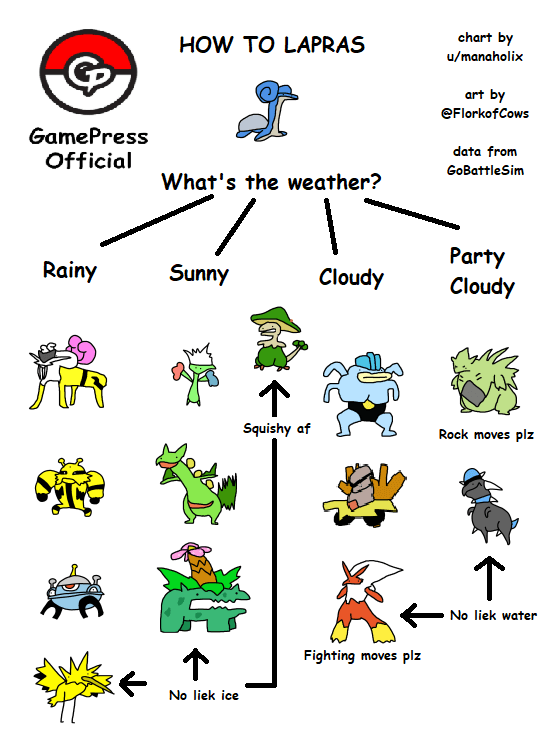 Lapras can also deal Super Effective damage back to many of its counters so pay attention to its moveset and adjust accordingly.

The recently introduced Magnezone becomes a major pick due to its Steel-typing which offers resistance against Lapras’s Ice-type attacks. Electrics and Fighting-types become more viable since Grass-types have a vulnerability to Ice, and Blizzard if un-dodged is pretty much a one-shot. Optimal choices for this moveset include Magnezone, Raikou, Electivire, Machamp, Hariyama, and Rampardos. Even though Zapdos is an Electric-type Pokemon, it's Flying sub-typing makes it vulnerable to Ice, so keep the bird away.

Grass-types have a good time against Lapras’s Water-type attacks since they resist them. It should be noted that if the weather effect is Rainy, Electrics perform way ahead of Grass-types even if Grass would resist the boosted Water-type attacks. It’s also obvious that Grass becomes the best choice during Sunny weather. Optimal choices include the Electrics listed above, but also include Roserade, Sceptile, Breloom, and Venusaur. Just keep Rampardos away from Hydro Pump since that’s a one-shot.

Lapras is a popular Pokemon not necessarily for its PvE viability, but more so for the nostalgia that it brings, in addition, it just being an awesome looking Pokemon. If you do PvP, the legacy moveset will give you a good Ice-type option since Blizzard is very expensive energy-wise. The raids generally aren’t too difficult, and most people at this point have access to at least some good counters even if they’re not the absolute best. Best of luck out there, and if you get yourself a shiny, then put it into a gym and flex dat shiny!