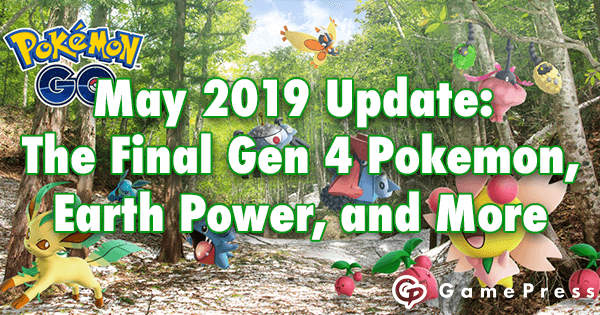 Pokemon GO had a large Gen 4 wave this weekend, bringing many highly anticipated Pokemon into the game. Additionally, a new Ground-type Charge Move, Earth Power, has been added and appears to be powerful in both raid and PvP content. With all these new Pokemon and this new attack, you may be wondering what’s good? The article below will help you navigate what to look out for.

Best of the Best

Garchomp is one of the most highly anticipated non-legendary Pokemon of Gen 4, and those who grew up with the main series games vividly remember fighting it (and maybe using it). Does Garchomp leave a similar impression on Pokemon GO? In raid content, kind of. In trainer battles, absolutely. The trouble Garchomp has in raids is that despite being a superb Dragon-type Pokemon, we already have a mountain of superb Dragon-type Pokemon that perform as well if not better than it. However, Garchomp rallies back as potentially the greatest Ground-type raider in the game. As a Ground-type Pokemon, Garchomp’s only competition is Groudon. While Groudon boasts greater overall stats, Garchomp can make use of Dragon-types resistances. Overall, if you don’t need another Dragon or Ground-type attacker, you won’t need Garchomp but Garchomp is a good investment -especially if you’re into PvP.

In the Master League, Garchomp is an absolute monster, acting as a strict upgrade to Groudon. Since PvP’s release, Groudon has terrorized the Master League with its fast and powerful Earthquake. Its main weaknesses have been shields and Flying-type Pokemon. Garchomp has that same devastating Earthquake, Dragon-type resistances, and Outrage for perfect coverage. The only weakness to Garchomp is that you’ll go down to Dragon Breath spam faster, but Groudon wouldn’t have won most of those matchups anyways. Outside of the Master League, Garchomp doesn’t make much headway, which is expected of most big CP, high attack stat Pokemon.

Magnezone has the offensive oomph to earn a place in the raiding meta, but its strength is in its 12 resistances. As long as it picks the right matchups, and chances are it will, it will outlast the other top Electric attackers while outputting comparable DPS. That's great, especially if you don't want to put up with dodging, relobbying, or all that other nonsense.

In PvP, Magnezone’s speed, power, and resistances allow it to make a showing in all three leagues. While the Great League has a large focus on Power-Up Punch and Mud Shot users, Magnezone specializes in deleting Pokemon that give them trouble. Probopass and Bastiodon are arguably better at this job, but neither will be available in Electric-type exclusive Silph Cups. The Master League’s Rock-Paper-Scissors are Ground, Steel, and Flying-type Pokemon, and Magnezone competes with its Steel-type brothers nicely. While Melmetal’s speed may keep it ahead, Magnezone is much easier to obtain and power up. In the Ultra League’s present state there isn’t much use for Magnezone, but should the meta shift away from Giratina, Magnezone could stand out as it does in the other Leagues.

Probopass may not be a raider but in PvP, it is an absolute monster. In the Great League, its role is similar to Melmetal and Bastiodon, KOing most Pokemon Medicham doesn’t. What makes Probopass standout (aside from its appearance) is its improved matchup against Azumarill, Melmetal, and Bastiodon. Better yet, Nosepass is easier to obtain than Meltan and Shieldon, and unlocking Probopass’s second charge move is cheaper. Probopass does Melmetal and Bastiodon's job cheaper, often better, and can take them 1v1 -talk about domination.

With Blast Burn, Blaziken takes the title of best Fire-type DPS in the game, making it a top option in the few raids where Fire-type damage is relevant. At first this power was going to be boosted even further with Blaze Kick, but unfortunately, it received a nerf prior to release. Blaze Kick is still an excellent Fire type Charge Move, but for raid content, you’ll just want to stick with Blast Burn.

In PvP, Blaze Kick has given Blaziken the speed it needs to threaten shields and secure KOs, and Blast Burn has given it a threatening Charge Move worth watching out for. With both moves in Blaziken’s repertoire, it has ascended its old role as a Counter bot to being a truly threatening Pokemon in the Great League. At this time Blaziken doesn’t appear to be a topmost option like Medicham or Probopass, but it will make a much stronger showing in Silph Cups.

Only two things are required to make an Ice-type viable in Pokemon GO, an Ice-type Fast Move and Avalanche, and Glaceon got both! Glaceon may not be as powerful as Mamoswine, but it is as powerful as Weavile. While being tied for second isn’t exactly a “win” it’s definitely doing better than most Pokemon. As far as PvP goes, Glaceon doesn’t hold a candle to other Ice-type Pokemon, lacking bulky stats and a dynamic movepool.

Leafeon is by no means a bad Pokemon, the Grass-type just has too many powerful options already. If you are enthusiastic about using your Leafeon, you may want to consider comboing Solar Beam with Leaf Blade to increase its potential. It won’t take Leafeon to the top but it will show your dedication to Leafeon’s cause.

Excellent bulk and access to Body Slam and Earth Power. Hippowdon is an example of a would-be-viable Pokemon for trainer battles held back by its Fast Move. Bite and Fire Fang are just too slow, but looking over its movepool in the main series games Hippowdon doesn’t have many options either. Maybe Yawn? As it stands, Hippowdon isn’t useful in raids or trainer battles but can be quite the pest in gyms. Perhaps it’s finally time GamePress updated their Gym Defense Tier List?

What Gastrodon, the Burmy family, and Cherrim lack in competitive viability, they make up for in collectability. Gastrodon has two regional colors separated by the prime meridian. The Americas will have Pink and most other regions will have Blue. Burmy has three biome based formes, Plant, Sandy, and Trash (parks, beach, and urban), and a split gender-based evolution into Mothim (male) and Wormadam (female). And finally, Cherrim has Sunshine and Overcast formes based on if you encountered it in Clear (i.e. Sunny) or any other type of weather. Happy hunting!

Of the seven Pokemon to receive the new Charge Move Earth Power, only Nidoqueen, Nidoking, and Claydol make good use of it. Despite Earth Power having both decent PvE and PvP stats, these three Pokemon can only make solid use of it in PvP. With Earth Power, none of these Pokemon become solid general threats in the Great League but absolutely have their performance boosted in Silph Cups. If you haven’t done your Nightmare Cup tournament already, you may want to consider adding an Earth Power Claydol to your squad. Should the Twilight Cup ever have a reprise, Nidoqueen and Nidoking will definitely stand out there.

One thing that’s interesting about Earth Power is Garchomp and Flygon’s ability to learn it in the main series games. While there aren’t any potent Pokemon with the attack right now, a future Community Day or movepool shake up could bring these two into greater power.

Gen 4 is finally almost all here! We're just missing Rotom, Mime Jr., and the rest of the legendaries. This surprising update has come out of nowhere to shake up a lot of the meta and give us some much-welcomed variety. Stay tuned for updates to our Attackers Tier List and Raid Guides, and maybe even some theorycrafting for Gen 5!