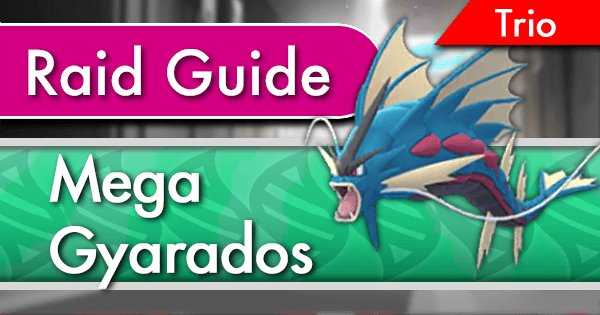 Mega Gyarados may have fallen through the cracks to a certain degree in terms of viability when compared to its competition, but it's still going to make you feel pain when trying to farm down its Mega Energy! Mega Gyarados has the highest defense stat among all of the Water Type Mega Evolutions, and while it has the second highest defense of all Dark Type Mega Evolutions, it has no double weakness to exploit. This fact, when combined with a high attack stat and a few attacks that are just downright mean to face on a raid boss, makes Mega Gyarados a fairly challenging prospect! When aiming for the trio, TDO is going to be the main problem. Many of Mega Gyarados' attacks are not resisted by its counters, meaning it can wipe teams fairly quickly. But by prioritizing dodging, staggering team wipes so that it can't recover HP from a full-wipe, and throwing in an anchor or two to stay in the fight for as long as possible, it's definitely doable with 3 trainers.

Note that a 2-person run is possible given Weather, Mega, and/or Friendship boosts, but it is more difficult.