Meta Implications of the Galarian Forms

Thanks to the Pokéminers, we now have the moves available for the Galarian forms coming to Pokémon GO! While we don't know their accessibility moving forward, it looks like Galarian Meowth and Stunfisk will be available from the Throwback Champion special research, and Meowth, Stunfisk, Darumaka, and Zigzagoon will be hatching from eggs. Galarian Stunfisk will also be available in the wild and raids. That aside, let's jump right into the analysis!

Galarian Meowth, Galarian Zigzagoon, and Galarian Darumaka are all too small to really look into, so let’s briefly just list their moves and move on.

Galarian Meowth learns Scratch and Metal Claw for fast moves, and Night Slash, Gyro Ball, and Dig for charged moves. Maxing out at 1035 CP, it’s not exactly making waves in any format.

Galarian Zigzagoon learns Tackle and Take Down for fast moves, and Dig, Body Slam, and Swift for charged moves. Maxes at 508 CP. Don’t.

Galarian Darumaka learns Tackle and Ice Fang for fast, and Ice Punch and Ice Beam for charged. Caps at 1442 CP, but the lack of defenses combined with the lack of coverage make it not very useful.

In general, most of these aren’t super impactful, due to typing, moves, and stats. But there’s one hugely notable exception: Galarian Darmanitan.

Galarian Darmanitan gets Ice Fang and Tackle (lol) as fast moves, and Overheat, Avalanche, Ice Punch, and Superpower as charged moves. Ice Fang + Avalanche is an incredibly potent combination that, when combined with an incredible 263 Attack stat, makes Darmanitan a beast. Zen Mode (if we ever actually get it) is even better, cranking up the attack stat all the way up to a frankly monstrous 323 Attack. Even Mewtwo’s only at 300! Even more noteworthy, in Snowy weather it actually has a fairly consistent solo against Rayquaza! That’s insane! 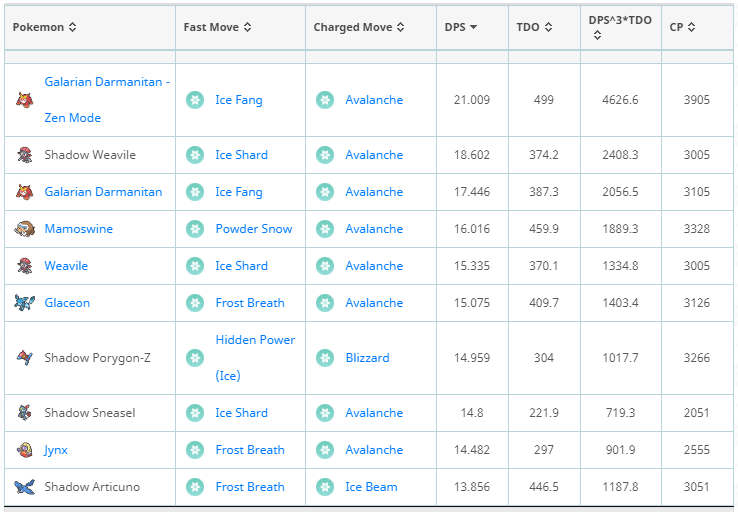 Probably no real PvP relevance though, for either form. As useful as high attack is for raiding, the lack of defensive stats is likely to just leave Garmanitan dead in the water against even neutral damage. As a rule, Pokémon in PvP need either bulk or speed, and with Ice Fang's low energy generation, Darm basically has neither.

All things considered, this is probably where the Galarians will shine most, and shine they very likely will. Some of these Pokémon have a real shot at making names for themselves in the Great and Ultra League metas.

With identical stats to the base Hoenn Linoone, Galarian Linoone is an interesting Pokémon to say the least. It has above average bulk, and access to Body Slam, and that’s a fantastic way to start a Pokémon. With Snarl’s 4.3 EPT, it actually has access to the fastest Body Slam spam in the game! Gunk Shot provides some interesting secondary coverage, whereas Dig (as bad a move as it is) could give it a way to touch Steel-types. Additionally, while Ginoone’s Dark/Normal typing gives it a crippling double weakness to Fighting-type damage (Counter users absolutely shred it), it also gives it a triple resistance to Ghost damage, making it an incredible Haunter counter in the Great League. You can also expect it to stand out as a major threat in the Sorcerous Cup (assuming Silph allows it to be legal), performing really well against everything that isn’t a Fighting- or Fairy-type.

As for the Open Great League, it’s not all sunshine and roses. Despite Galarian Linoone’s many strengths, it has a multitude of issues. Counter is incredibly relevant in Great League, with Toxicroak, Vigoroth, and Deoxys-Defense showing up on so many teams. Without Dig, it can’t touch Registeel or Bastiodon, and even with Gunk Shot you lose to Azumarill (even the ones without Play Rough!). While it does beat things like Umbreon, Whiscash, and Swampert, and can take down Grass-types out of nowhere with a Gunk Shot, its inability to handle any of the common Regi/Altaria/Azumarill core will leave it relegated to being more of a niche tech pick than anything. Its CP cap is far too low for Ultra, which means you're probably better off leaving it in Great, and not even considering it for Master.

Hey is it just me or is that….pretty cool? First of all, it gets Counter, one of the best fast moves in all of PvP. Second, an incredible selection of charged moves with great coverage. Third, the Dark/Normal typing that, again, gives it a triple resistance to Ghost damage. Capping at 2652 CP, Obstagoon seems like an immediate fit for the Ultra League. Running Counter/Cross Chop/Night Slash can let it (kinda) fight Registeel and Giratina (or at the very least, Shadow Claw variants of. Dies hard to Dragon Breath). There’s no chance it can actually tank a Focus Blast, which means that you only beat Regi by shielding twice, and that makes the Regi matchup iffy at best. That said, your ability to apply consistent solid pressure against so many things is an exciting concept for sure! And, of course, potentially fun for the #getbeamed AND #getcanned squads!

With that coveted Rock/Ground coverage (has at least neutral coverage on everything except Breloom, Torterra, and Virizion!), pretty solid Ground/Steel typing, and great bulk, Galarian Stunfisk is absolutely positioned to be a threat in the Great League format. While it’s tempting to compare it to its normal Ground/Electric version, it’s actually more comparable to other Steel Tanks like Bastiodon and Registeel. An archetype defined by its bulk and resistances, generally leading to wins against Flying-types and Charmers and losses against mud and fighting, Steel Tanks fill a very key role in the meta. Gunfisk, here, actually performs comparably to Bastiodon, except for the fact that it actually cleanly beats stuff that beat Bastiodon, such as Deoxys-Defense (sometimes, it can lose the 1-1 to psycho boost variants), and actually beats Registeel in even shields going straight Earthquake! It even beats Altaria without shielding even if Alt shields twice! That said, unlike Bastiodon and Registeel, it really struggles to fight back against Azumarill and Meganium, which is certainly a strike against it. This is definitely a mon that seems like it would be worth testing out when Great League comes back to GBL! It wouldn't be surprising if this were the single most impactful Galarian form of all.

The stats: a little bit underwhelming, all things considered. Maxing out at 2386 CP, it feels kinda similar to Zangoose. Shadow Claw + Close Combat and Foul Play is a functional analog to the Goose’s SC+CC/Night Slash, and it gives it a solid spread against Dragon Breath Giratina. That said, its overall matchup spread is admittedly underwhelming. While you do beat Cresselia (not exactly surprising) and other things that die to Close Combat, it doesn’t seem like it holds much competitive advantage over other things in the meta. The fact that it has to be Lv40 makes it a pretty major expense for a somewhat underwhelming performance. Could be fun to test, but don’t expect huge results from it. As for the Great League, if its similarity to Zangoose is anything to go by....well, you don't really see much Zangoose, do you.

While, honestly, Garfetch’d deserves to get written off about as much as the other first-stages, the fact that it technically has the CP to fight in Great League means it kinda warrants its own section. As a Pokémon with Leaf Blade, it has an immediately solid matchup against Azumarill and the Mudbois, and can beat Bastiodon in even shields by going straight Brick break. All things considered, though, kinda meh? Don't rush to make one of these, you can do better with your dust.

Those MOVES, dude!!!! They’re ALL GOOD (except Brave Bird which is Just Okay). In the Great League, this mon is super squishy, with bulk right around Blaziken’s. While that’s not a great start, that doesn’t mean it can’t put in work. After all, Haunter’s still a monster in Great League. Assuming you’re running Counter + Leaf Blade and Close Combat, it’s set to tear up the Ultra League meta, taking down Registeel, Snorlax, Lapras, Feraligatr, Alolan Muk, Blastoise, Shiftry, Escavalier, Swampert, and Poliwrath, and getting impressively close to taking down Charizard. Unsurprisingly, you get shredded by any Charm user, the Giratinas, and Cresselia and Armored Mewtwo, but you’re not gonna be a Fighting-type and avoid that. This mon seems like a real threat to be reckoned with if you can position it right! It’s probably less impressive in the Great League, though. While it does have some strong matchups (Leaf Blade is great, Close Combat and Counter let it tear through Steel-types), it’s probably a bit too squishy to really function at its best here.

In the Master League, it actually has some notable wins! As a Fighting-type, it manages to beat out common Pokémon such as Snorlax, Metagross, and Melmetal, as well as beating Dialga in the 0 and 1-shield scenarios (dies to Dragon Breath in the 2 though). Sadly, even with Leaf Blade, it fails to consistently take down Kyogre in even shield scenarios, or Groudon without shielding twice, and you lose to the ubiquitous Giratinas.

As for moves, Night Slash and Brave Bird are also interesting options, and while they probably won’t beat out Leaf Blade and Close Combat, give Sirfetch’d some neat versatility!

Do note that, at the time of writing, we have no evidence that Galarian Farfetch’d and Sirfetch’d are being released in this first wave of Galarians with the other Pokémon listed, which means there’s additional time for their movesets to change.

...Eh? Other than the galaring exception of G-Stunfisk, none of these Pokémon seem to be particularly meta-defining. Early reports say that Galarian Stunfisk is a pretty common wild spawn for this event, which is really exciting. Galarian Linoone has a shot at really shaking up the Sorcerous Cup meta. Galarian Darmanitan will be a monster as an Ice-type attacker. The others, though...eh. They all seem to have some issues holding them back from glory. Still, though, as always, we’ll have to see how the meta shapes up before making any final judgments