Back again sooner than expected, with Season 2 comes a small number of very impactful changes to PvP. Succinctly, here they are:

Wild Charge is going from a 90 Power/50 Energy move to a 100 Power/45 Energy move that reduces the user’s defense by 2 stages. This makes it an Electric-type version of Close Combat.

Moonblast is going from a 130 Power/70 Energy move to a 110 Power/60 Energy move with a 30% chance to lower its target’s attack by 1 stage. It has the base stats of Outrage, with an added benefit!

Drill Run has gone from an 80 Power/55 Energy move to an 80 Power/45 Energy move with no additional effects. This 80/45 statline is shared with Sky Attack, an incredibly strong and almost meta-defining move.

Palkia is getting Aqua Tail added to its movepool. At the time of writing, it appears that it will just be accessible via normal TMs, rather than being an exclusive move.

So, what does this mean? Let’s go in order

Wild Charge was honestly in a pretty fine place. As Strictly Better Thunderbolt, the statline was super solid, and it was a great tool for Electric-types. While this isn’t strictly a buff to the move (-2 defense is a harsh drop), it is likely to make the move overall better.

Remember, the primary gameplan for using Close Combat is often “farm up to 90 energy, and then fire off two back to back.” This is because it leaves minimal time for you to be negatively affected by the defense debuff. Electric-types arguably benefit from this playstyle more than Fightings due to their generally fantastic energy gain. That said, despite this, Electric-types are often lacking in the bulk department.

In the Open Great League format, there’s only really one relevant Wild Charge user: Alolan Raichu. It leverages its typing to resist both of Registeel’s charged moves, as well as shredding Azumarill. Mew also often runs Wild Charge for a similar reason, but it’s hard to call it quite as relevant.

In Ultra League, due to the presence of Pokémon like Giratina and Swampert, it’s far harder to be an Electric-type. You just generally don’t have as many targets. In Master League, this problem is amplified yet further, since the meta is so heavily defined by Dragons. Raikou has certainly been an interesting off-meta pick in the past, with Wild Charge + Shadow Ball providing some solid coverage. That said, its inability to consistently beat Kyogre (Thunder Shock needed to win the 2-2 shield matchup and Volt Switch to win the 0-0) made it somewhat of an iffy pick.

So, what’s changing? As weird as it is to say, probably not much. While Wild Charge is likely going to perform better, the fact that Wild Charge was in a pretty good place already means that this likely won’t push any Wild Charge users from obscurity into the spotlight. If anything, though, keep an eye out for Alolan Raichu and possibly Magnezone in the Great League. Raikou’s likely to remain “just alright” in Master League, though, for reasons that we’ll discuss later

Moonblast is a very solid move with very limited distribution. Currently, the only Pokémon that a) learn it and b) are relevant are Clefable and Cresselia. So, let’s briefly break down what this means for them!

Clefable is a fantastic Charm user in both Great and Ultra League. However, due to Charm’s incredibly low energy generation (2 energy per turn), it has super limited access to its charged moves. At the moment, it runs Psychic (55 energy) and Meteor Mash (50 Energy). This is because Moonblast costs 70 energy (which it will likely never even reach), as well as because it has redundant type coverage with Charm. While 60 Energy Moonblast helps with the first issue, it doesn’t really fix the second. Meteor Mash is too good to pass up, and Psychic can provide some valuable extra coverage. Moonblast’s primary use would be fishing for that 30% attack debuff chance. That’s not to say there’s no case for that, though! While you still get walled out by something like Registeel, stopping it from taking out your Clef and then beating up on the next mon too could be worthwhile.

Cresselia is a strong and incredibly bulky Psychic-type, relevant both in Great and Ultra League. Similar to Bastiodon and Umbreon, it can often take matchups because it’s just so hard to take down. At the moment, it has a few viable sets, deciding between Confusion and Psycho Cut on the Fast Move front, and any combination of Aurora Beam/Moonblast/Future Sight (and soon Grass Knot) for its Charged Moves. Moonblast is arguably its most commonly used move, though, allowing it to handle Dragons and Darks that would otherwise wall it!

For Cress, there are definitely upsides and downsides to this Moonblast change. While the 10 energy discount with an attack debuff chance is fantastic, going from 130->110 Power is hard. Notably, you lose the ability to 2shot Giratina-Altered in Ultra League, and you need that much more chip to take down Shiftry.

Much like with Wild Charge, don’t expect any huge meta swings as a result of the Moonblast rebalance. It’s definitely not “better” now, just different

Finally, a strict upgrade! Drill Run was previously not a very good move. At 80 Power for 55 Energy, it was...a bit better than Bulldoze, but definitely not what you’d want from a 55 energy move. Dropping it down to 45 energy is huge. Sky Attack is great. Now, Drill Run is too.

The catch is, there aren’t that many Pokémon that even learn it. Escavalier will absolutely love this change, though, giving it a new cheapest move and allowing it to perform significantly better against Steel-types. Excadrill may see a bit more play as well, running Rock Slide + Drill Run for fantastic coverage.

As far as other Drill Run users go, though, there are more unknowns. Dunsparce gets the same Rock Slide/Drill Run set as Excadrill, and has great bulk, but it’s held back by the fact that its best fast move is Bite, which….kinda underwhelming. While this is a huge boost to its viability, going from “No.” to “Probably don’t.” still doesn’t leave it in a great place.

The final Drill Run user here is Legacy Seaking. Frankly, this is a pretty unpleasant pick, using Poison Jab + Icy Wind and Drill Run as its preferred set, all three being legacy moves. Hope you’ve got an existing legacy one or plenty of Elite TMs. However, it does seem like it has a ton of potential. Poison Jab + Icy Wind lets it handily defeat Azumarill, and with Drill Run it beats Registeel in the 1-1 and 2-2 shield scenarios without baiting! Easily a pick worth considering. While, like the other two, Drill Run won’t leave the meta unrecognizable, it’s gonna make a couple currently maligned Pokémon MUCH stronger.

Aaand here it is. The big one. The reason Raikou’s probably going to remain relegated to obscurity. One of the new Master League heavy hitters, you can see in one image why AT Palkia’s going to be so strong 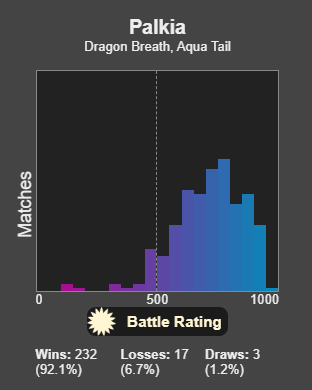 Even without a second move, Palkia has a 92% winrate across all of Master League. Aqua Tail allows it to leverage its great typing (Water and Dragon cover each other’s weaknesses very well) and solid stats to tear through everything that doesn’t resist it. Much like Dialga, it heavily relies on Dragon Breath’s great damage to handle a lot of matchups (it beats Giratina-Origin, Garchomp, Kyogre, Darkrai, Raikou, and Machamp with only Dragon Breath and 1 shield). Aqua Tail, though, adds even more. If you have any experience playing with Dragonite, it works similarly. Spam Dragon Breath, then use a 35 energy move (in this case Aqua Tail instead of Dragon Claw) to just keep up regular damage.

While this isn’t quite as meta warping as something like Dialga or Fire Punch Groudon, Palkia is likely to make a pretty big splash. Despite Wild Charge hitting harder, Raikou can’t really handle Palkia. Palkia also has a fantastic matchup against Kyogre, double resisting Waterfall and Surf, and only taking neutral from Blizzard or Thunder. It also performs well against Groudon, Heatran, Rhyperior, Snorlax….many things. Functionally, it ends up working really well in a meta where Steel-types are less relevant due to Fire Punch Groudon. Palkia is, all things considered, super likely to be worth making for the invested Master League player!

Outside of Master League Palkia, these changes aren’t really likely to cause huge meta shakeups. You’ll probably see a bit more of each Wild Charge/Drill Run user early on as people experiment, but it’s yet to be seen whether or not the relevant users will hold a huge meta share as the season goes on. All things considered, though, it is very cool to see Niantic willing to make these seasonal changes, and if it’s something they continue with, it could help to make each season feel different from the previous one. That’s worth getting excited about