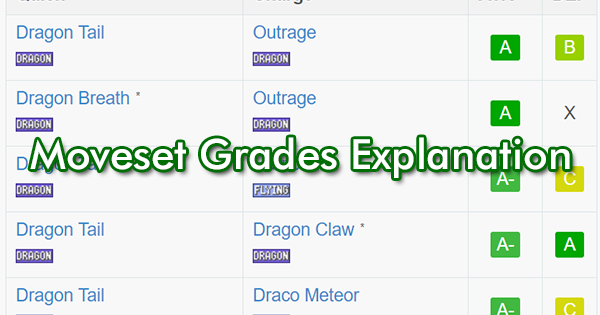 Moveset Grades provide a scale for summarizing the quality of a moveset.

Because these grades are relative to the Pokemon, a good Pokemon's "F" moveset could be better than a bad Pokemon's "A" moveset.

You can read in great deal the considerations employed in developing these ratings, but the short story is that the methods used to develop our Attackers and Defenders Tier Lists are extended to these grades.

We use a combination of gym simulation results (which will feature energy usage and energy efficiency), metagame factors (attacker and defender popularity, etc) as well as to a lesser extent, efficiency with dodging factored when particularly relevant.

Each Pokemon has a particular role that they best excel at, so most, if not all Pokemon can be useful attackers.  Attacking movesets grades are aimed at making Pokemon excel the most in their particular role, as well as improve their viability in a handful of other feasible match-ups.

Having two attacks of the same type is generally an advantage, as you can more directly abuse the gym defender's type disadvantage that you're exploiting.

Each player has a different playstyle, but we assume most players only dodge charge moves while attacking. Generally, moves with a shorter cool down are better for players who dodge, while moves with higher damage output but a longer dodge window are better for players who don't dodge.  Both circumstances are considered in this iteration of the ratings.

Most Pokemon are not meant to be defenders (e.g., Alakazam, Tangela, etc.) and only around 20–25 Pokemon currently released are good defenders worth putting in gyms. If the Pokemon is not on our Defenders Tier List, it is likely not a good gym defender.

A moveset's defensive ranking is generally based on its maximum damage output against an array of their most common counters.

Moves that perform well against a Pokemon's counters (e.g., Zen Headbutt on Blissey against Fighting-types) are given more weight when ranking defensive moves. These moves force attackers to dodge, instead of spamming attacks while absorbing the damage.

High-damaging quick moves are better than high–energy-gaining quick moves, since a majority of sub-par defenders will most likely die before using their charge move.  Note that this is not always the case with tankier Pokemon such as Blissey and Snorlax.

A move's dodge window has lesser influence now that more players are comfortable with dodging.

Can't find Giovanni - over a month now!
Hello, It’s been over a month since I try to encounter Giovanni - but without success…
DPS spreadsheet missing moves
Hi everyone, i just noticed that vaporeon with scald and jolteon with zap canon are…
Shadow snorlax in ML classic
Finally I got a good IV shadow Snorlax double moved and maxed for ML classic,…
CP Difference
Can anyone explain how CP affects the attacking power of a Pokemon in raids/gym…
Time out in pvp (esp UL)
It never bothered me much, but this season time out is a serious issue especially in…
Read More