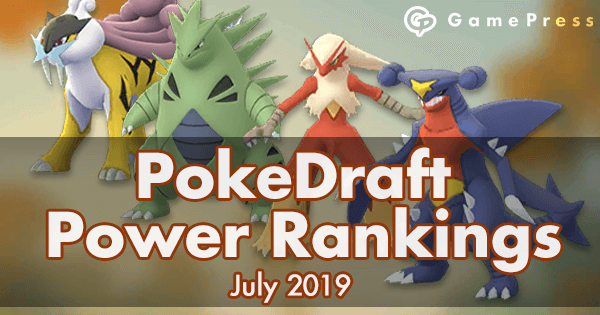 Got a new season of PokeDraft beginning soon? GamePress’s four experts in the format ranked their top 25 picks to get your ready for your upcoming draft. In order to make sure we’re all on the same page, we ranked according to a standard set of rules — namely, those used by the PoGoRaids PokeDraft in season 6. In particular:

Even with a set of agreed-upon rules, ranking Pokemon for a format such as PokeDraft is incredibly difficult and some choices may feel somewhat arbitrary. In the rankings that follow, the four GamePress writers considered their local climate during the summer months (all of us live in the northeastern United States) and the readily-available weather types for raiding. These rankings will certainly look different in the winter, with snow-boosted Pokemon like Metagross, Mamoswine, and Weavile becoming more relevant as the calendar turns to December. Some may also find rare and useful weather types such as fog and wind more easily accessible than others. Your mileage may certainly vary.

Included with the list of our rankings is some information about each Pokemon’s popularity in the 6th season of the PoGoRaids PokeDraft (“v6”) among the 13 divisions that drafted according to the rules listed above. Note that this draft began on May 15, before the most recent movepool shakeup (including the addition of Charm, and Wing Attack on Moltres), before Mudkip Community Day, and before many drafters had obtained decent Cranidos or Gible.

For more about the PoGoRaids PokeDraft, see NoLucksGiven’s breakdown of the Champion Division draft with v5 Champion David.

Each of the four writers (CuttyWow, NoLucksGiven, DownWithTTP, and yourcalcprof) ranked their top 25 Pokemon for the format (all unranked Pokemon were given a score of 30). To obtain the Power Ranking, these ranked were averaged, with the highest and lowest scores for each Pokemon weighted half as much as the others, and ranked from lowest to highest. The v6 draft results do not figure into the Power Rankings as listed below.