Here we go again! Pokemon Go's premier yearly event, Go Fest, has been announced. Last year's event was note worthy for several reasons, including the release of the Mythical Pokemon Victini and the introduction of the oppressive force that is Shadow Mewtwo. However, the single most important change to the event was the fact that it was released in earnest to the entire Pokemon Go playerbase, and not just ticketholders who met in the Chicago area for the event. This made Go Fest 2020 arguably the most celebrated event in Pokemon Go history to date, but what can we expect for 2021? The knowledge pool is shallow currently, but let's dive into what we know.

On the surface, Niantic's announcement post (viewable near the bottom of this article) shares very little about Go Fest 2021, more-or-less giving us a date, a slight teaser, and a "more information coming soon" bit to work with. However, a few inferences can be made based on the information that is present, as well as information that is absent.

Go Fest has traditionally been a localized event that was held in the Chicago area. It's long been a ticketed event (that has been notoriously plagued by scalpers) that required a physical presence, though non-attending players were given an event to have at least some advantages. However, 2020 and the Coronavirus put a stop to that last year.

The official news post talks about the success of last year's Go Fest, and also lacks any mention of tickets going on sale. These factors (combined with the fact that the Coronavirus is still lurking) seem to point towards a non-centralized Go Fest again for 2021. While we can't say this much for sure, we can say that the track-record of the popular 2020 event combined with the listed factors makes it very likely that we'll either see a global Go Fest like last year, or a hybrid setup where a centralized location has the event proper, but players can join in with an in-game ticket anywhere in the world. Either way, be sure to set aside these dates and a bit of extra cash for the ticket itself!

The Mythical Pokemon of the Event

It's a long-held tradition to release a Mythical Pokemon with every Go Fest, and this year will likely be no different. However, the news post doesn't mention anything aside from last year's release of the Generation 5 Pokemon Victini. How can we possibly work out the featured Mythical Pokemon from this? Well, we could go through the patterns of the past to work out the most likely candidates, or we can read a bit deeper into the news post itself.

We currently have two clues to work with on this front. The first is the banner, with the 2021 Go Fest logo: 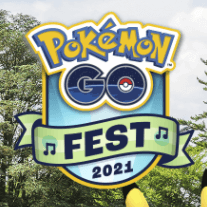 Do you see the first clue? Well, we have more to go on than just that. Niantic loves to drop hints with italicized text in their news posts, and they just happen to have a rather odd point this time around:

These two clues; music notes on the title, and emphasis on the word "tuned" come together to point toward a Pokemon that is themed after sound, or possibly music...?

Based on these clues, we are confident in our assumption that the featured Mythical Pokemon of 2021 will be the Generation 5 Melody Pokemon, Meloetta.

So what does this mean for players? Well, that currently remains to be seen. Meloetta comes in two different flavors; its "basic", Psychic/Normal type forme known as Aria Forme, and its "altered", Psychic/Fighting forme known as Piroette Forme. In the main series, it will change formes in-battle by use of its Normal Type signature move, Relic Song. It's very likely that we'll only see the release of Aria Forme for Go Fest if our predictions are correct, with Piroette Forme coming at a later date.

So how is Meloetta predicted to perform? Not outstandingly well, unfortunately. It's far behind its contemporaries in both formes in terms of raid performance, and it's set to be a niche pick in PvP under current circumstances.

However, did you take note of the phrase Signature Move above? Jirachi and Victini both had their signature moves on release, which gives us precedent for the release of Relic Song alongside Meloetta on its release. Don't count this singing Pokemon out until it's finalized, because it may yet have a future... in PvP anyway.

Mark your calendars—Pokémon GO Fest will return this year as a two-day global event from July 17 to July 18, 2021!

Last year’s event featured the debut of a brand-new worldwide format that saw Trainers from around the globe working together to complete challenges, unlock rewards, and defeat Team GO Rocket. From the launch of the Global Challenge Arena to the thrilling research that led us to Victini, Pokémon GO Fest 2020 was truly an event to remember!