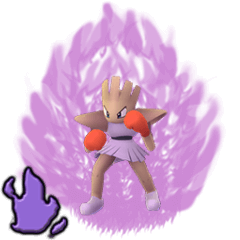 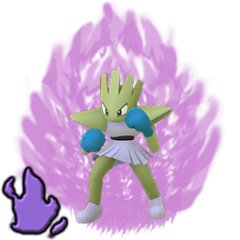 Shadow Hitmonchan doesn't have much use. Invest in Shadow Machamp instead.

Counter is the best fast move for Shadow Hitmonchan, and benefits from STAB. Bullet Punch is suboptimal stat-wise and doesn't have any real use; it can cover Shadow Hitmonchan's weakness to Fairy-types, but you shouldn't be staying in for those fights anyways.

Power-Up Punch is weak, but can snowball its attack stat after just a few uses, while Fire Punch, Ice Punch, and Thunder Punch each offer outstanding coverage options, and should be chosen based on what Hitmonchan is being used to counter.

Shadow Hitmonchan has outstanding coverage options, but a lack of real power to back it up. It can definitely be useful if played to its strengths and its role compression, but it's not a generally large threat.

Shadow Hitmonchan has the same advantages of its large coverage profile, but the competition makes it hard on our favorite boxer.

Hitmonchan is a midweight at best, so trying to jump into the heavyweights is not a good idea.

Chinchou now evolves into Chimecho
image1536×2048 233 KB image1536×2048 280 KB Well I wouldn’t see why a flat anglerfish…
Bad omens are upon us
image1536×2048 250 KB Satan’s come for revenge on the GBL reward Seedot 1…
Leveling 40 to 50.. When did you give up or hit a road block/wall
If don’t care overly about leveling… or it seems too much a chore. or simply you’ve…
Birds know Legacy moves on raid day
I just got randomly invited to a remote raid and caught a Moltres with Sky Attack. So…
Pokémon not leaving gyms after their health is drained
Honestly i need help with this and if someone could help me it’ll be able to help…
Read More