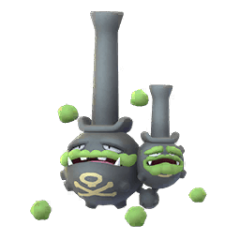 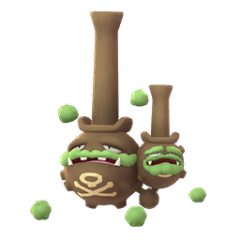 Galarian Weezing's introduction to Pokemon Go caught many by surprise. There was no official announcement ahead of time, nor did anyone have experience with it from the main series because Sword & Shield was released right around the same time. A unique Fairy/Poison typing is interesting, but a closer look at Galarian Weezing's poor stats and pitiful moveset leaves a lot to be desired.

The addition of Fairy Wind in September 2022 is a much desperately needed improvement for Galarian Weezing, enabling fast energy generation and allowing more frequent access to Charge Moves.

Sludge costs the least amount of energy (40), gets STAB, and can be used to bait shields. Play Rough hits hard with STAB and demands a lot of energy. Overheat is a powerful move with an unappealing self-debuff, but is the only coverage option available to fight back against Steel-type Pokemon.

Galarian Weezing has a very interesting Fairy/Poison typing, which in theory should give it some unique niches where it could stand out. Good defensive stats result in decent bulk in Great League, which is a plus. The addition of Fairy Wind significantly improves Galarian Weezing's performance in the meta, giving it some actual use, especially in specific limited formats. Unfortunately Galarian Weezing will still struggle against common Steel-type Pokemon, unless Overheat is chosen at the cost of a STAB move.

Galarian Weezing has a max CP of 2293, which doesn't even reach the CP cap of Ultra League. It's better to consider other Pokemon instead.

In Master League, the only thing this Pokemon is smoking is defeat.