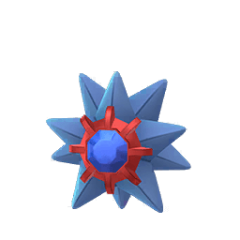 Starmie was never a top-tier pick due to its frailty, and with every new Water Type it falls farther and farther out of favor. This Pokemon that is supposed to be a star never got its chance to shine, and has fallen by the wayside as one of many fan-favorites that are lost in the shadow of obscurity.

Water Gun offers the most consistent performance, and benefits from STAB. Hidden Power can surprise opponents with its unpredictable typing, but has poor energy generation.

Psychic gets STAB and ties for the least energy cost among Starmie's charge moves. Ice Beam provides useful coverage, including against Starmie's weakness to Grass Pokemon, in addition to costing less energy than other options. Thunder offers superior damage compared to Power Gem, though neither are recommended due to greater energy demands and less preferable coverage for Starmie. Hydro Pump is powerful with STAB, but demands too much energy to use.

Starmie is a Water/Psychic Pokemon with a relatively high ATK stat compared to Pokemon in the meta, which makes it rather fragile. Starmie's poor bulk and slow charge moves discourages its use, as it will most likely faint before making any significant impact.

Starmie's poor bulk and cumbersome moveset hold it back from seeing any real play in PvP, and this continues to be the case in Ultra League.

Starmie lacks stats for Master League, among its other struggles.