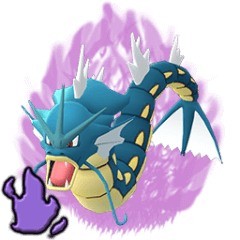 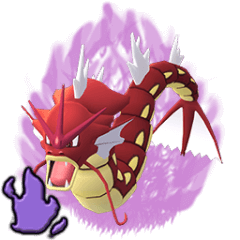 Shadow Gyarados is powerful without a doubt. It stands very high on the Water Type DPS charts in particular, making it a great choice for most players. In fact, Shadow Gyarados actually out-damages Mega Gyarados when not counting Mega Boosts! If you're lucky enough to find a high-IV Shadow magikarp, then Shadow Gyarados may be worth keeping over purifying for the sake of Mega Gyarados.

Dragon Breath or Waterfall + Aqua Tail* and Crunch or Outrage

Dragon Breath is a blessing to virtually anything that has it, and Gyarados is definitely no exception. It sports 4 DPT (Damage Per Turn) and 3 EPT (Energy Per Turn), which makes it Gyarados' objectively best quick move despite lacking stab.

Aqua Tail (50 Power/35 Energy) is an incredibly cheap move that can provide frequent shield pressure. Hydro Pump (130 Power/75 Energy) can threaten KOs when not shielded, but its high energy cost makes it a less consistent option. Crunch (70 Power/45 Energy) provides good overall coverage, decent damage, and a reasonable energy cost, while Outrage (110 Power/60 Energy) is very powerful at a fair cost. This set provides Gyarados with a powerful catch-all playstyle that's hard to come into, and is likely to deal meaningful damage even to Gyarados' counters, while also allowing it to act on opposing dragons while not being hindered by a dragon weakness itself if packing Outrage.

You could also go for Bite, with 4 DPT and 2 EPT, making Gyarados an aggressive Dark attacker. It is worse against Giratina, however, and with it Gyarados becomes even slower. Waterfall is also not a bad move, and is better against Steel and Fairy Pokemon, but there are generally many superior Water-type attackers to choose from.

Gyarados is a great Pokemon, but the Great League's CP restrictions really limit it. It's possible to leverage its typing and good moveset against select counters, but it's probably better to level it up to a higher CP and use it in another league.

Gyarados starts to shine in the Ultra League as the restrictions to its high CP begin to loosen. Here, Gyarados's single strongest niche has to be its ability to take down Giratina and wall Registeel. It can also remove the threats from Dragonite, Swampert, and Charizard. Gyarados' has access to great moves of Water, Dark, and Dragon type, all of which have very good coverage that is narrowly resisted when brought together.

In the Master League, Gyarados has many strong niches by virtue of its sheer power and Water/Flying typing. The versatility of its moveset allows it to take out Metagross, Mewtwo (lacking Thunderbolt), Groudon, Swampert, and Machamp. it can also do extremely well against general threats such as Dragonite and both flavors of Giratina. While some movesets are considered objectively better than others in a neutral scenario, Gyarados' potential in regards to typing coverage makes it more unpredictable than most Pokemon in the tier. On top of that and despite its many fantastic qualities, Gyarados is also severely threatened by other big-names such as Melmetal, and pretty much anything sporting Electric coverage. Again, Gyarados is probably one of those Pokemon that you should save a shield for in order to maximize its effectiveness.