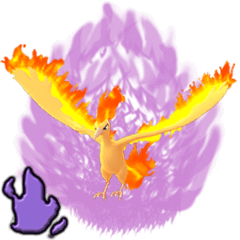 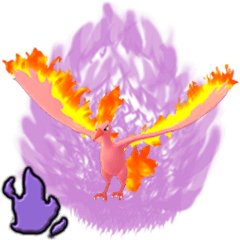 Shadow Moltres is one of the top Shadows in the game, and one of the top Pokemon in general. It tops the Flying and Fire DPS charts easily, and has very little real competition on the horizon save other Legendary Pokemon becoming Shadows as well.

Fire Spin is the preferred fast move, with more damage output than Wing Attack and slightly less energy gain. Wing Attack has somewhat of a niche if Fire Spin would be resisted, but otherwise is inferior.

Sky Attack is the primary charge move for Moltres, sporting good power and costing less energy than other charge moves. Ancient Power ties for the lowest energy cost among Moltres' charge moves, and also provides wide coverage. Overheat threatens massive damage at the cost of a self-debuff, and its coverage can be useful against common Steel-types.

The restricted CP of this league hurts Moltres substantially due to a very high ATK stat, as well as its weakness to many common coverage types, in particular anything Rock-type. It should be noted that Sky Attack is not available in this league due to it being exclusive to Moltres's raid event, which results in negligible viability in this league.

Moltres isn't great in the Ultra League. While it has dominant matchups against common threats such as Registeel, Escavalier, and Charmers, its incredibly low bulk and weakness to things like Giratina, Cresselia, and Swampert leave it an incredibly underwhelming pick. Consider leaving this bird on the bench in favor of something like Charizard.

Moltres is underwhelming in the Master League. While it can handle things like Metagross, Groudon, and Togekiss, its matchups just aren't worth it. Ho-Oh works this typing better.