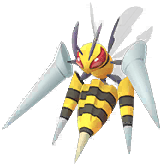 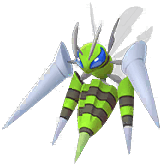 One of the first Mega Pokemon introduced to Pokemon Go, Mega Beedrill looks absolutely terrifying with its high ATK stat. While Bug and Poison typings are typically not as valuable as other typings, the early accessibility makes it a good entry option. It should be noted while Mega Beedrill packs a big punch (or sting), it's also very fragile and likely won't last long as an attacker. Stronger Bug-type Mega Pokemon will likely be introduced in the future to replace Mega Beedrill, but for now this is a cool addition to any player's collection. Also worth noting is that Mega Beedrill packs the highest Poison DPS of any of the Mega Evolutions, though Poison is still a less than useful type in raids generally speaking.

X-Scissor and Sludge Bomb gain STAB with Mega Beedrill and solidify its role as a Bug/Poison type. The former costs very little energy to use and can be spammed to bait shields, while the latter packs a harder punch with a higher 1.6 DPE rating. Aerial Ace is an inferior move that doesn't get STAB even if it would offer coverage against Fighting-type Pokemon. The addition of Fell Stinger following the Dec 11, 2019 rebalance is interesting for Mega Beedrill, but isn't very impactful if it doesn't bait a shield due to its pitiful damage output. Beedrill's Community Day move, Drill Run, gives it the much needed coverage against Steel-types that it's STAB moves lack. It's also quite a powerful move, with 1.78 DPE.

The Update to Mega Evolution: A Review