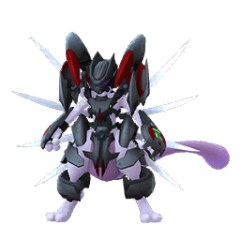 Dynamic Punch is also a good move and can be useful for gym clearing. Stick with Confusion for higher DPS and EPS.

Mewtwo's power-dampening armor significantly holds it back. Armored Mewtwo's Attack is equal to Girafarig, Poliwrath, and Sandslash. It will likely see as much use as any of those Pokemon despite its impressive bulk.

Dynamic Punch is an upgrade over traditional Mewtwo's Focus Blast, though you'll definitely want to stick to Fighting-types for that job.

Unless there's a way to unlock Mewtwo's full potential in the future, the best use of Armored Mewtwo is to transfer it for additional candy to Power Up the real deal.

Confusion is not the terrible Iron Tail, and is thus the fast move of choice for Armored Mewtwo in PvP. This is because it is good and not bad. Psystrike is an incredible move. Incredible damage, incredibly energy efficient, with really solid neutral coverage. While it's not a strict upgrade over Rock Slide, the additional damage does it pretty huge favors in neutral scenarios.

Rock Slide is preferred for its coverage and relatively lower 45 energy cost, which also makes it the ideal choice to bait shields. Dynamic Punch is an excellent Fighting-type move that costs 50 energy and also covers Mewtwo's weakness to Dark-type opponents. Earthquake and Future Sight both cost a steep 65 energy, but the former provides wide coverage while the latter takes advantage of STAB. Generally speaking, the Psychic-type damage from Mewtwo's fast moves makes Future Sight somewhat redundant.

Currently Armored Mewtwo can only be obtained from raids, which means it's impossible to obtain one with less than the 1500 CP cap of Great League, even if traded.

Armored Mewtwo is blessed with a very diverse and powerful moveset in PvP, and with very good defensive stats, it has the bulk needed to perform well. Unfortunately a weakness to Ghost-type attacks makes it difficult to deal with the ubiquitous Giratina in Ultra League, and the unextraordinary energy generation from Confusion means Armored Mewtwo will also have a hard time dealing with Dark-types that try to beat Giratina. However, the mix of bulk, power, and coverage definitely make it a worthwhile consideration here. Even more importantly, the rise of Cresselia from niche pick to meta powerhouse leaves Mewtwo walled out all too often.

Just in like Ultra League, Armored Mewtwo has the same issue dealing with Giratina, which is especially noteworthy given Giratina-Origin's increased prevalence over its Altered twin. With a max CP of 3187, Armored Mewtwo actually falls a bit short of the stats that many other Pokemon have in this league, however its strong moveset still allows it to have a solid overall win ratio. In general most Steel, Psychic, and Dark-types perform quite well against Armored Mewtwo, making it a somewhat iffy, though still powerful pick.

Friend brasil
friendship code 3395 6543 7484 Código de treinador 3395 6543 7484 Sou de Pernambuco…
CLEANUP FIND
Well guess I found one of the best flying pokemon 20201028_1721291080×1853 457 KB…
Shadow Mewtwo in Great League
Because of the October Giovanni appearance one can catch shadow Mewtwo at level 8…
Resetting Giovannis Quest
Hey there! This is something I’ve been wondering about for a while now, and although i…
Potential meta-relevant PvE Pokemon list?
Hello, is there any resource that can give us the information about potentially PvE…
Read More