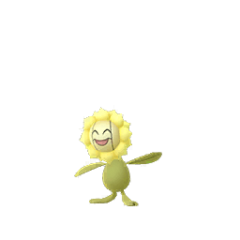 In an environment with many useful and kind of samey Grass-types, Sunflora fails to stand out among its peers. If you want a pure Grass-type attacker, then evenTangela and Meganium are better.

Sunflora's fast moves are polar opposites of each other; the former sports high energy generation and poor damage output, while the latter features strong STAB damage and pitiful energy gains. Either fast move could work, but keep in mind Sunflora's charge moves all require a lot of energy.

Sludge Bomb costs the least amount of energy, and is the only option available for typing coverage. Leaf Storm demands less energy than other Grass-type charge moves, and is very powerful for its cost, but applies a self-debuff on the user. Petal Blizzard is recommended over Solar Beam due to its cheaper energy cost, despite being slightly less efficient in terms of Damage Per Energy (DPE).

Sunflora as a mono-Grass type Pokemon competes with the numerous Grass-types in this league for a slot on your team, but unfortunately falls behind due to unimpressive bulk, and a cumbersome moveset. Various other Grass Pokemon can fulfill the Grass-type role much better than Sunflora.

With a max CP of 2141, Sunflora lacks sufficient stats for Ultra League.

Whales and rhinos don't like Razor Leaf, but there's stronger Grass-types out there.