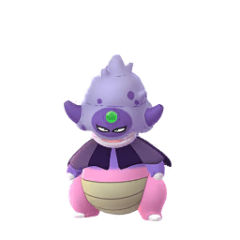 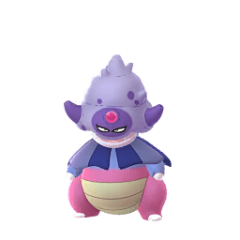 Galarian Slowking has poor stats for raids and attacking gyms, but makes for a decent gym defender due to its resistances against common Fighting-type attackers. Unfortunately it has no real threat against attackers like Tyranitar.

Confusion sports more than double the damage output of Hex thanks to STAB, but the latter offers faster energy gains, which are much needed for Galarian Slowking's costly charge moves. Acid is a poor move, even with STAB.

Shadow Ball costs a moderately high amount of energy, but is faster than other available options and largely unresisted in the meta. Future Sight and Sludge Wave demand the same high energy cost and threaten a lot of STAB damage if unshielded; either can be viable depending on the preferred typing coverage.

Galarian Slowking got shafted pretty hard with the movesets it received upon its release into Pokemon Go. While Confusion and Hex aren't bad at all, the only meaningful charge move is Shadow Ball. With such slow charge move options, Galarian Slowking falls behind many other Pokemon through its inability to pressure shields at the faster speeds that most meta Pokemon can provide. Overall an unfortunate disappointment, but a moveset rebalance in the future could make this Pokemon more viable.

Resistances to Grass, Fairy, and Fighting is largely what gives Galarian Slowking some breathing room in Ultra League. Most of the time plays will involve Hex + Shadow Ball, but without STAB nor faster charge moves, it's unlikely to perform well overall. Confusion tends to be more favorable for 2-shield plays thanks to its high STAB damage, whereas Hex prefers otherwise.

Behold, the glorious king of... slowness. So slow that it competes with Slaking in terms of who can faint the... slowest....

Shinx Community Day
Looks almost certain according to Leekduck, the move will doubtless be a PvP one…
Yamask / Cofagrius ... will it live up to the hype?
I wanted to ask the PVP gurus out there if they think Yamask / Cofagrius will live up…
1500 and below or above Empoleon
So I have enough candy to evolve my 3 star 439 Piplup… should I evolve it and have a…
Worst Research Ever
It took me 5 minutes to complete the latest instalment of the Misunderstood Mischief …
FOREVER: Level 43 task
It is so boring that many players have 100Million XP and are still stuck in level 43…
Read More