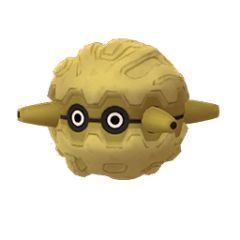 Forretress isn’t a fortress as the name would suggest. This Pokemon has very limited use in the metagame. On offense, its fast move has zero synergy with its charge moves and its low Atk stat is plain unviable. On defense, although Forretress’s Def stat is impressive, it’s crippled by low HP and a fatal double weakness to Fire. There isn’t much value in Forretress and it’s not worth spending stardust on.

Bug Bite is the superior fast move, with the average 3.0 DPT (Damage Per Turn) and 3.0 EPT (Energy Per Turn). Struggle Bug falls behind in energy generation.

Earthquake (1.85 DPE) is a slow but powerful move that gives Forretress the much needed power and coverage against its only weakness: Fire-type Pokemon. Rock Tomb (1.17 DPE) doesn't provide a lot of value for its high 60 energy cost and is one of the worst charge moves for PvP. Heavy Slam (1.4 DPE) isn't a spectacular move, but its STAB damage and moderate 50 energy cost lets it be more accessible against specific targets. The recently added Mirror Shot and Sand Tomb moves aren't particularly strong and are mostly used for baiting shields. The former requires less energy (35) with a 30% chance to debuff the opponent, while the latter costs a bit more energy (40) but guarantees a debuff.

Forretress is more of a fortress in PvP, featuring good bulk and only one vulnerability. A relatively cumbersome moveset is disappointing, and leaves Forretress with few options to apply shield pressure. Forretress mainly takes pretty comfortable wins against Psychic-types, Dark-types and every popular Grass candidate in this league, which lets it pair well with Pokemon that can cover its weakness like Quagsire, Whiscash, or Azumarill. Just keep the bug tank away from Fire-type pokemon.

Forretress still does the same job in as it did in Great League, which is bullying wins out of Psychic-types and walling Grass and Fairy; unfortunately, most of those aren't as relevant here, and Forretress is more often left praying that the Earthquake lands to do any sort of damage to the more popular Dragons and Steels. Its weaknesses to Fire-types and losses against Counter users prevent it from ranking any higher.

With a max CP of 2282 Forretress isn't gonna bug most competitors in Master League.

Perfect IV pokemon outside of Master League
I know having a perfect IV pokemon out of ML is more for collection but I was looking…
Catch dust (what's more than usual)
Want to put together a list of stuff that gives bonus dust on catching. I’m sure…
Season of Heritage timed quest reward?
So, we’re now into the season of Heritage. (Sure hope it’s not the US Southern motto…
Hydro Cannon Swampert - when was the last time it was available?
Has hydro cannon Swampert been available since its community day? I have a nice…
Moltres Solo Raid
I’ve finally done it! https://www.youtube.com/embed/YPVEwpFPSTM OMG! It took forever…
Read More