Community Posts with Keyword Heracross All 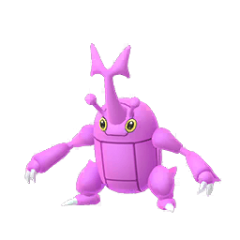 Heracross frequently appears in gyms, either to show off or to help a player farm candy, but its defensive prowess is poor, being weak to and resisted by many types.

If you're lucky enough to have a good Heracross outside of its native range, then definitely hold onto it. When and if we see Mega Evolution released, Heracross has a particularly strong mega evolution up its sleeve.

Counter + Rock Blast and Close Combat or Megahorn or Earthquake

Counter is considered by many to be the overall best move in the PVP meta, sporting a fantastic mix of 4 DPT (Damage Per Turn) and 3.5 EPT (Energy Per Turn). This allows it to do very good damage while charging its moves at an above-average rate.

The addition of Rock Blast following the GBL Season 9 update is very appealing for Heracross due to its low energy cost and useful Rock-type coverage, especially against Heracross's weakness to Flying-types. Close Combat enables Heracross to perform more consistently as a Fighting-type and threaten massive damage. Unfortunately the -2 Defense debuff on the user makes it risky to use, which is not very comforting when considering the limited bulk of Heracross. Megahorn hits hard and isn't terribly energy-intensive to use. It also grants Heracross an invaluable Bug-type STAB to help it take down many of the Pokemon that it's generally chosen to counter. Earthquake is a strong move that provides wide coverage, but is also the slowest option.

Heracross can use its unique typing, good stats, and strong moves to act as a niche closer. It's particularly effective against Dark types and can provide solid counter-coverage for Psychic and Ghost-types. The problem here is the fact that its restricted CP does it no favors, and common Pokemon with effective counter-coverage are running around the tier, such as Altaria and Deoxys-D, though Psychic-types in particular also need to be weary of STAB Megahorn. Just note that Heracross fares particularly poorly against Ghost-types, and needs to run very quickly if its opponent has any chance of packing Flying-type moves in particular.

Heracross is actually fairly good in the Ultra league for the reasons outlined above in conjunction with its substantially less restricted CP. It's a threat to top Steel pokemon, but also destroyed by both Giratina forms. It still acts best as a closer and needs to be paired with a pokemon that can cover its weaknesses, but it can definitely punch holes in the opponent's team if played right.

Heracross' performance stays largely the same in the Master League, acting as a closer with typing to counter top threats. It's particularly good at dealing with Dialga, but it's rendered downright trivial in the face of many other threats such as Togekiss and both forms of Giratina. At this stage, Heracross will tend to either perform remarkably well or be little more than dead weight.