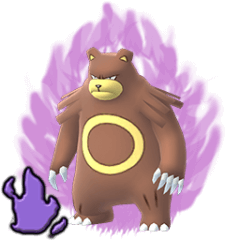 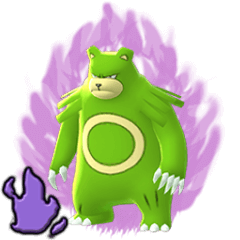 Shadow Ursaring has a fair amount of power, but basically no way to use it. Normal typing is outright bad in raids, and its lack of STAB moves that can deal Super Effective damage leaves it in a very "meh" area. Best to ignore Shadow Ursaring.

Ursaring's primary role in Ultra and Master League is as a counter to Giratina-Origin (and to a lesser degree Giratina-Altered), double resisting Ghost-type attacks, so Shadow Claw is your fast move of choice. There are better options for Counter users, and you still have Close Combat as useful coverage for the many relevant Steel-types. Play Rough rounds out the moveset with a nuke for Dragons as well as for Ursaring's Fighting-type counters.

Ursaring performs quite well against Ghost-types thanks to its double resistance as a Normal-type Pokemon. However this is mostly the only reason to pick Ursaring, since it struggles against the rest of the meta due to its poor bulk and inefficient charge moves.

Up in Ultra, where Giratina reigns supreme, Ursaring begins to pick up a powerful niche, doing a great job at walling the renegade dragon's mono-Ghost moveset and swinging back for super effective damage with Shadow Claw and Play Rough. However, Ursaring tends to struggle against many of the other threats of the league, meaning it's a bit of a one-trick pony. Still, it's a very nice trick to have!

In Master League, Giratina-Origin becomes even more prevalent than in Ultra, which gives Ursaring another bump in utility. That said, as before, it's still a niche counter, which limits its utility.