Community Posts with Keyword Mantine All 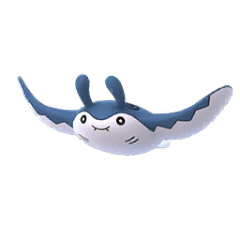 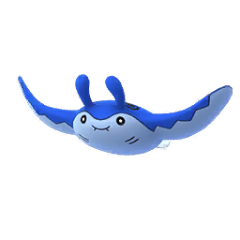 Its attack is too low to make a dent in raids, and its Water/Flying typing means it will be absolutely fried by any gym attacker packing an Electric Type move for gym defense. It's probably best to pass on this flying manta ray.

Bubble is slightly superior to Wing Attack in both energy and damage output, and also helps cover Mantine's weakness to Rock-type opponents. Aerial Ace gets STAB and offers a lower energy option which can be used for shield baiting. Ice Beam is a great move for coverage and performs better than the other options in terms of DPE (Damage Per Energy).

Wing Attack can be used to give Mantine another option against more specific opponents though this moveset is more of a niche. Aerial Ace is still preferable as the option for shield baiting. Water Pulse is a poor move for PvP and isn't recommended, but the option for coverage against Mantine's weakness to Rock-types should still be considered.

This set takes Mantine in a slightly different direction. Bubble Beam is weak, but it has a 100% chance to lower the target's defense. This allows Mantine to soften up hard-hitting opponents, and can turn a losing matchup into a winning matchup if used on the switch. This is a riskier set that takes experience to use effectively, but it can make for a very strong trump card if played right. Bubble is generally the way to go on Fast Moves due to its higher energy gain.

Mantine features good durability, a decent moveset, and a typing that offers three times as many resistances as weaknesses. With a double vulnerability to Electric-type attacks, Mantine has to pick its fights carefully though. A rather suboptimal moveset holds Mantine back from winning more often, though its decent win rate against popular meta picks like Medicham, Whiscash, and Venusaur is definitely a plus. Overall a pretty decent Pokemon that's relatively underused in the meta, just don't let it get zapped.

With a max CP of 2108 Mantine falls short of claiming glory in Ultra League, though a greater presence of Dragon-types which decreases the frequency of Electric-types allows Mantine to abuse its Ice Beam a bit more. A long list of losses which includes Giratina is unfortunate, and suggests Mantine be kept in Great League.