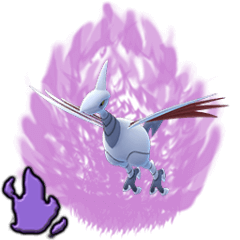 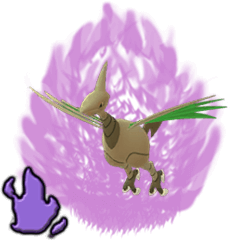 Shadow Skarmy gets a boost to its damage, but it's still not enough to make it even mildly viable. Better to skip this one.

Air Slash sports the average 3.0 DPT (Damage Per Turn) and 3.0 EPT (Energy Per Turn), but also benefits from STAB to provide respectable damage output. Steel Wing is typically not used due to poor offensive value from Steel type attacks, in addition to its lesser energy generation, but can have its niche here and there.

Sky Attack is Skarmory's primary charge move, gets STAB, and costs the least amount of energy. Brave Bird is the most powerful option available, following its buff from GBL Season 3, and is generally recommended for its overall damage output despite its risky self-debuff. Flash Cannon provides extra coverage for when Flying type attacks would be resisted, but its high energy cost and unimpressive 1.57 DPE (Damage Per Energy) makes it unappealing to use.

Skarmory is a staple for Great League PvP, featuring great bulk, an excellent typing, and a good moveset. Being well-known as a terrific flier in the meta, it's almost always a mandatory pick due to its 10 resistances and excellent performance in the meta. While it does have solid wins against most Pokemon, its moveset does make it rather toothless against most Electric and Steel-types. Having a 100% win rate against every possible Grass-type in this league is an excellent perk, but also being able to beat most of them with fast moves alone gives Skarmory an insane farming advantage, which lets it fight the next opponent with enough energy for possibly two Sky Attacks.

The level 50 update enables Skarmory to compete in Ultra League, with respectable bulk and a very appealing long list of resistances. An efficient moveset combined with a very strong defensive typing results in impressive performance just like in Great League, with notable losses mostly when at a typing disadvantage (which isn't a lot when considering Skamory's weaknesses and resistances). It should be noted that Skarmory performs better when legendary Pokemon are excluded, as Giratina and Registeel deal with Skarmory quite easily.

End of Rocket Baloons?
They stopped spawn.Normally, if no specific event was active, they spawned every 6…
Best (future?) Hundo evoli
Still have a hundo Eevee lying around and already have a hundo glaceon which i don’t…
Level 42 Challenge - Eevee Evolutions
Working on the Level 42 requirement of evolving Eevee into each of the unique 7…
Great League Remix
Top 10 pokemon by usage in Great League GBL are banned for the cup, banned mons were…
Shadow Poll
Hey people, I have seen that some support shadows and some don’t enjoy them. I want to…
Read More