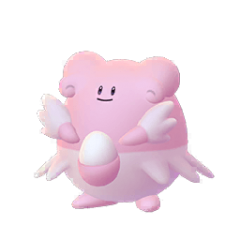 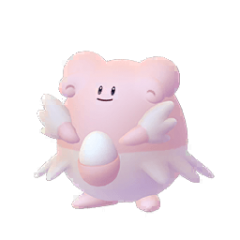 Blissey does not really have a "bad" defensive moveset. All defending Blissey movesets perform exceptionally against the majority of attackers.

In metagames past, Blissey struck fear - or at least mild annoyance - in the hearts of prospective attackers, being by far the best defender species in Pokemon GO. Many would say that Blissey is the only “good” gym defender. Blissey can deter low-level players and casual passersby from attacking a gym in order to earn more coins or badge points. She is also ideal in defending a gym with a raid egg about to hatch.

In raids, Blissey has awful DPS and can cost players bonus Premier Balls earned for individual damage contribution and team contribution. Therefore, Blissey's only role should be as a gym defender.

Pound and Zen Headbutt are two of the worst fast moves in the entire game for PvP. With pathetic energy gains and horrible damage, there's not much to expect from these other than maybe more disappointment. At least Pound gets STAB.

All of Blissey's charge moves are very expensive to use in PvP, that combined with terrible energy gains from either of its fast moves, results in a tank that doesn't threaten its opponents a lot. Dazzling Gleam and Psychic both cost 70 energy to use, but Dazzling Gleam hits harder with a higher 1.57 DPE (Damage Per Energy) and provides slightly more coverage. Hyper Beam is one of the most powerful charge moves in the game with a huge 150 base power and neutral damage, but is also one of the slowest moves, costing 80 energy. Psychic is another worthwhile move with 55 energy cost for 90 power, especially given its counter-coverage options.

When PvP was first announced Niantic calmed the fears of the masses about a giant pink monster terrorizing everyone like it did in the gym system. With an insanely high bulk and coverage moves against its only weakness, Blissey was set to become arguably the best Pokemon for PvP in almost every league, until moves got reworked for PvP. A ginormous nerf to essentially all of Blissey's moves helped drop it from hero to zero and paved the way for the rest of the 99% to have a chance at PvP.

With a win ratio of roughly 10% in this league, Blissey won't be seeing much use here. It does get a win off Spiritomb though.

With a higher CP cap Blissey gets a better win ratio in Ultra League, though mostly against off-meta picks. As a slight note, Blissey does get a win against Giratina Origin Forme in this league if the latter only uses Ghost-type moves.

Blissey actually has a lower win ratio in Master League than in Ultra League. While that doesn't help it become a more viable pick, it still beats Giratina Origin Forme in Master League if the latter didn't learn its lesson of not using coverage moves.

A GamePress Debate: Should You Use Rare Candy on Blissey?