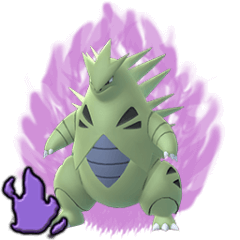 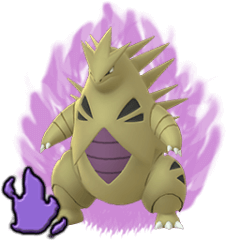 Shadow Tyranitar is a return to form for the tyrant of the early-game raid scene. Its sub-par damage output is largely healed up by the Shadow boost, and it's become a real threat that is easily on a par with the Legendary/Mythical Pokemon that it competes with as a Dark or Rock Type attacker. If you're lucky enough to rescue a decent Shadow Larvitar, then this monster will serve you well!

Smack Down* or Bite + Stone Edge and Crunch

Smack Down tends to be a stronger option than Bite due to superior energy generation, which is notable due to Tyranitar's costly charge moves. However, the latter lets Tyranitar become a Ghost- and Psychic-shredding machine. Iron Tail is a poor move.

Crunch costs the least amount of energy and benefits from STAB. Stone Edge is powerful and provides good coverage, but costs quite a lot of energy to use. Fire Blast demands too much energy to be consistently worthwhile.

Tyranitar’s heavily attack-weighted stat distribution does it no favors down in Great League. A double weakness to Fighting-type damage, in addition to weaknesses against common Water, Grass, and Ground-type attacks, makes it a very risky Pokemon. While it shines in certain limited metagames, its stats combined with the fact that a lot of other things can do its job don't leave it super happy. Smack Down Shadow Tyranitar in particular has a niche in the limited time Halloween Cup, combining its resistances with the metagame's general lack of Rock resists to deal heavy damage.

The higher CP cap in Ultra allows Tyranitar to perform better, though not necessarily well. Its Rock/Dark typing gives it a solid matchup against both Giratina forms, but make it much weaker against Fighting-types, in addition to Grass and Water Starter Pokemon.

Prior to Zacian's release, Shadow Tyranitar has a niche as a relentless source of Dark-type damage, absolutely shredding through common targets like Mewtwo, Giratina, and even Lugia. It is largely preferred over its non-Shadow variant as it is actually able to defeat Dialga in the 1 shield, as the Shadow Bonus allows Tyranitar to hit a breakpoint that regular Tyranitar cannot. Generally speaking, anything that doesn't resist Dark will generally be seriously dented by this monster. Although it can perform as a Rock-type damage dealer with Smack Down, Bite simply had less targets resisting it.

With that said, despite its excellent stats and offensive prowess, Shadow Tyranitar suffers from many, many weaknesses. A light hit from any Fighting-type move is almost certain to KO, and weaknesses to Fairy, Water, and Ground further hold it back due to how common they are. Bite's energy gain is abysmal, and Shadow Tyranitar has a difficult time getting off Stone Edge against targets where its Dark-type damage is insufficient. Shadow Tyranitar is often a challenging Pokemon to build around and requires certain metagame trends to work properly.