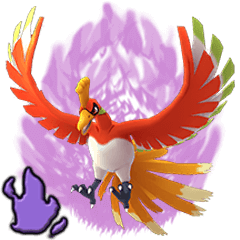 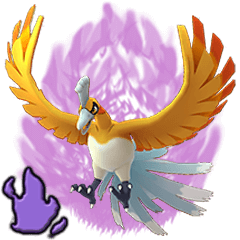 Shadow Ho-Oh gains improvements in PvE thanks to the ATK buff from being a Shadow Pokemon, however it will forever live in shadows of Shadow Moltres, Shadow Charizard, and Mega Charizard Y. If it ever gets its signature Sacred Fire added to Pokemon Go, perhaps that will make it more viable.

Incinerate is recommended due to its high STAB damage and energy generation, though it is quite cumbersome being a 5 turn fast move. Extrasensory and Steel Wing are both inferior choices by a considerable margin, though they don't suffer nearly as much from the slow animation that Incinerate has. Hidden Power is not a great attack in PVP, but it can have some niche utility on Shadow Ho-Oh if given the proper typing.

Brave Bird demands quite a bit of energy, but is the cheapest charge move available to Shadow Ho-Oh. While its self-debuff makes it somewhat risky, its high STAB damage makes it considerably threatening if unshielded. Earthquake is a move limited to events and Elite TMs, but its Ground-type coverage is incredibly valuable against common typings, especially against Shaow Ho-Oh's double weakness to Rock-types. Solar Beam and Fire Blast are among the most expensive charge moves in the game energy-wise, but the former provides coverage against Water and Rock Pokemon that Shadow Ho-Oh can struggle against, while the latter is best avoided due to the lack of coverage.

Being released as a Shadow Pokemon enables Ho-Oh to participate in Great League much more easily. The trade-off of having an ATK buff and a DEF nerf as a Shadow Pokemon is actually more favorable for Ho-Oh due to the high damage output from its moveset, enabling more wins in certain scenarios than regular Ho-Oh. However its cumbersome charge moves leave Ho-Oh in a difficult spot when shields are available and it doesn't have a typing advantage. Ho-Oh would prefer to play as a closer in the end game when shields are gone, or at the least with an energy farming advantage to pressure shields more comfortably.

Shadow Ho-Oh acts primarily as a closer, using its powerful but slow charged moves to finish off opponents lacking shields. Its performance in 2-shield fights is quite poor, and it has close competition with Charizard and Talonflame, to which it loses to when shields are in play. Since Ho-Oh is a legendary Pokemon, it also has to contend with Giratina who has a decently comfortable time beating the Rainbow Pokemon. Wins against bulky Psychic-type legendaries in this league are largely 1-shield one-tricks, while the battle against Melmetal shows how painfully slow Ho-Oh's moveset truly is. For all this hurt, the devastating damage from Ho-Oh's charge moves should not be underestimated, if it can ever get to them.

Ho-Oh fairs slightly better here than in the Ultra League. All of the previous points stand, but it also has good matchups against several strong Pokemon such as Groudon, Metagross, and Togekiss. However, as the depth of its niche deepens, its breath narrows. Ho-Oh has even more trouble here against many of the tier's monstrous threats, such as Kyogre, both forms of Giratina, and Zekrom. Its fight vs Dialga is also very tight, depending on the timing of charge move activations due to the difficulty of using Incinerate as a 5 turn move.

Can we please talk about the new updates?
Listen, if some big name youtuber uses MEMES to deal with sloppy shit that are most…
PVP2: Rare Movesets
So what pokemon do you use a very rare moveset on in pvp. For me its Gary + Outrage. …
PVP1: Debatable Movesets you have a hard time deciding on
So what are some Pokemon you have a hard time deciding between. For me there are 2…
Which regigigas to power up?
got a 15-14-14 shiny regigigas with Hidden Power Fire recently. don’t think I will…
Shadow Legendary IVs
Sooooooo i just used the Super-Radar i had rolled over to get an early Shadow Ho-oh…
Read More