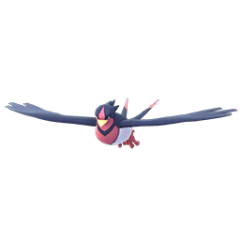 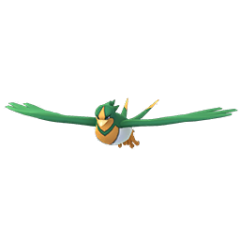 Being the 3rd generation's Pidgey family equivalent, Swellow has nothing going for it. Piddling stats cannot support any moveset this 'mon has, even with double STAB.

Sky Attack is the best Flying-type charge move in the game, which also makes it the primary charge move for Swellow. Because there's no significant perks to its other charge moves, Swellow actually doesn't need to unlock a second charge move at all. If you want to be as optimal as possible, Brave Bird can hit slightly harder if unshielded at the cost of more energy and worse energy efficiency.

Swellow is one of the many Flying-types competing in Great League, but unfortunately doesn't shine like some of the more popular picks due to relatively poor bulk and a lack of coverage options. Thanks to its Normal typing, double resistances against Ghost-type attacks allow it to win against Haunter and Alolan Marowak, though this isn't really enough to justify its use. If you're looking for a Normal/Flying contender, Noctowl would be a more preferable choice due to greater durability and access to some coverage options.

Swellow's max CP is 1920 which doesn't even reach the cap for Ultra League.

Birds don't like dragons, especially when they have double the amount of CP.