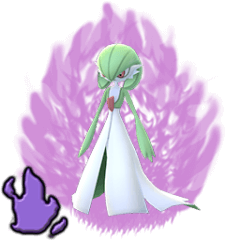 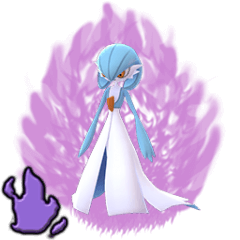 Shadow Gardevoir is coveted for its high Fairy Type power, which actually puts Fairy on the map to a large degree. In Dragon raids in particular, it can be a surprisingly bulky counter that hits very hard, and is generally a top counter in Cloudy weather. However, when going head-to-head with Pokemon of other types that counter the Dragon, Dark, or Fighting types that Fairy is used for, it tends to fall a bit short. It's worth raising a high-IV Shadow Gardevoir, but it's most likely going to become a counter reserved for very specific scenarios.

The addition of Charm significantly improves Gardevoir's overall performance, and threatens much of the meta with huge STAB damage without worrying about shields. The tradeoff is the burden of having the worst energy generation in the game. Confusion offers superior energy gain and solid damage output, but other Pokemon are better suited for a Psychic-type role, as Gardevoir is primarily used for its Fairy role.

A moveset that is crippled by gaining only 2 energy per turn (2 EPT) severely limits any use of charge moves, and removes any sort of shield pressure that would be possible otherwise. Shadow Ball is chosen due to its lesser energy cost than other options, in addition to its relatively neutral damage against most opponents, and coverage against Gardevoir's weakness to Ghost-types, Bronzong, and Metagross. The addition of Synchronoise, thanks to the Ralts Community Day, gives Gardevoir a cheaper Charge Move option energy-wise which makes it more viable than any of its other expensive choices.

Note on Psychic Vs. Synchronoise

In a September 2019 update, Psychic was buffed to 90 Power/55 Energy. This makes it slightly more expensive and slightly more damaging than Synchronoise, and also makes the two moves virtually interchangeable in most PVP settings. However, Synchronoise is still preferred when paired with Charm due to the latter's low energy gains.

Charm makes Gardevoir an anti-meta specialist, hitting popular Fighting, Dark, and Dragon-types extremely hard. Thanks to Gardevoir's Psychic-typing, it also enjoys wins against most other Psychic-types due its resistance in the Psychic mirror, while still hitting back neutrally with Charm. A high ATK stat distribution holds Gardevoir back significantly due to the resulting poor bulk. The prevalence of Steel-types in the meta also give Gardevoir a very difficult time. Overall Gardevoir is alright for its Fairy-type role, but more durable competitors like Wigglytuff tend to perform better.

While Fairy-types are highly valued in Ultra League due to the dominance of Giratina, Gardevoir is unfortunate to have a Psychic sub-typing, which makes it vulnerable to Giratina's attacks. Beating up Fighting-types and comfortably winning against most Dragons in this league are definitely good perks, but losses against Giratina are big liabilities in the Fairy-type role. Popular Steel-type picks also give Gardevoir a lot of trouble. If you're considering a Fairy, bulkier Charm-users like Wigglytuff would be better choices.

Shadow Gardevoir is the only Charmer that is strong enough to defeat Dialga in the 1 shield. Resistance to Psychic also means it fares a bit better against Mewtwo than Togekiss or Sylveon. However, it is extremely fragile and is often outclassed by the aforementioned Charmer options. It suffers from the same issues as they do - namely losing to Steel-types, Ho-Oh, and Kyogre, and the added Ghost-type weaknesses makes Shadow Gardevoir shaky at handling Giratina. Generally speaking, Shadow Gardevoir should only be used alongside another Charmer, as it is an often outclassed choice when used on its own.