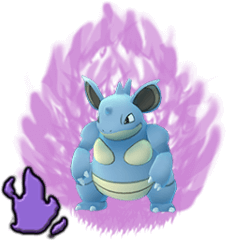 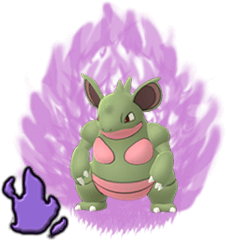 Nidoqueen is the defensive half of the Nido-royalty. Unfortunately, Nidoqueen’s stats aren’t very defensive, and weaknesses to the common Psychic and Water types only hurt. There’s little point to using Nidoqueen on offense when Nidoking has the same optimal movesets and 24 more points of Atk.

A relatively simple moveset that takes advantage of Nidoqueen's best STAB moves. Poison Jab is the fast move of choice due to STAB and much higher energy gains. The addition of Earth Power helps Nidoqueen access a Ground-type charge move sooner, while Stone Edge provides wide coverage. Since both Earth Power and Stone Edge cost the same energy, Nidoqueen doesn't need to shield bait. Sludge Wave or Earthquake could be chosen as harder-hitting options, but the cost of 10 more energy risks Nidoqueen fainting before being able to use them.

Nidoqueen caught a few eyes during the first two Silph Arena Cups, but has since then been somewhat forgotten about. Well-rounded stats and a Ground/Poison typing weak to common typings like Water or Ice don't really let Nidoqueen stand out from the crowd. Where Nidoqueen claims her throne position is when shields are down and her powerful charge moves are capable of finishing off wounded opponents. Even though the addition of Earth Power does give Nidoqueen a quicker access to a Ground-type charge move, the lack of power compared to Earthquake actually results in some losses instead of wins, such as against Sableye, since Earthquake hits a lot harder. So while cumbersome, Nidoqueen can still find its place in the meta, and picks up easy wins against popular Pokemon like Bastiodon, Melmetal, and Medicham depending on shielding.

Nidoqueen doesn't perform very well against the increased number of Dragon-types in Ultra League. Wins against popular Steel-types like Dialga, Melmetal, and Heatran are to be expected, but there's little answer to the common problem that plagues every challenger in Ultra League: Giratina. Overall a decent candidate, but the lack of extraordinary bulk or low energy charge moves keeps Nidoqueen to mostly a nuker/closer role.

With a max CP of 2488 Nidoqueen is mostly limited to the two previous leagues.

Shadow Articuno worth capturing?
So it appears that shadow Articuno is the reward for completing the new special…
Themed Teams
With tier 3 raids all being doable for me now and t5s just being a matter of getting…
Kanto compensation
Well, I now feel like my ticket for the Kanto event was well worth it, what a list of…
Using my Elite Fast Move TM
Hi! Season 6 of the Battle League ended a few days ago and I got an Elite Fast Move TM…
Dullest pvp mons
Across all leagues 1 Umbreon and skarmory (no comment) 2 bastiodon (epitome of tank,…
Read More