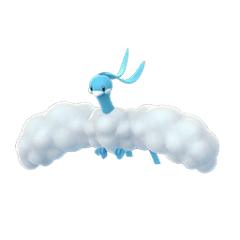 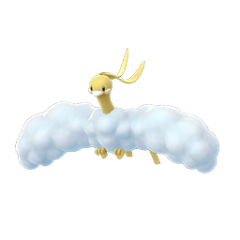 Altaria, the Humming Pokemon, is the showy performer of the Dragon family, not a fighter. Its Attack stat is weak and its Health is middling. This alone makes Dragonite a stronger option on defense than Altaria.

That said, raising an Altaria isn't a terrible option, as it is set to be a fairly efficent Mega Evolution. While its DPS is absolutely nowhere near the levels of monsters like Mega Rayquaza, it can spread its mega boosts for an extremely long time, which can actually work out better full-team average DPS depending on what its team mates are.

Dragon Breath is one of the strongest Fast Moves in the game, with incredible damage output. This allows Altaria to deal solid damage through shields, while also threatening opponents with charged moves. Peck is underwhelming in both damage output and energy gains.

Sky Attack is both cheap and hard-hitting, which makes it Altaria’s most-used attack. Moonblast is a move limited to Community Day events and Elite TMs, but deals slightly more damage than Dragon Pulse even when considering STAB, provides the same coverage against Dragon-types, in addition to coverage against Dark-types. Its moderately high energy cost results in less frequent use, and Altaria is largely not dependent on it to see success. Dazzling Gleam is a downgrade due to its higher energy cost and less efficient Damage Per Energy (DPE).

Incredibly bulky with impressive damage, Altaria can power through most neutral matchups. It typically requires a dedicated counter to take down: its only issue is that some of them (namely Azumarill and Steel-types) are very common in the Great League meta. It also doesn't require much of a stardust investment to be built, so it can be a relatively easy addition to any team. If you don’t have one yet, you absolutely should.

The Level 50 update made Altaria viable for the Ultra League too, if you're willing to max it out. It's quite similar to Dragonite there, boasting higher bulk, but also less aggressive damage output. However, Dragonite being so much cheaper to make can make the huge investment for a Level 50 Altaria a bit redundant.

Much like in Ultra League, Altaria just doesn’t get powerful enough to handle any of the threats in Master. This cloud will just get blown away.

Update Glitch
Has anyone been experiencing any kind of problems with the new update lately? …
Raid Glitch
Has any experience any issues in raids? Am experiencing some kind of glitch in the…
Elite move after evolution
Hi! First post on the forum :P. I have a question that have not been able to find an…
Giratina (A and O) breakpoints
I returned defeated even with some lucky trades this event, I´m a fan of Giratina …
Nidoking deserves more credit!
I see Gamepress wiki still gives Nidoking a poor rating due to its best fast move…
Read More